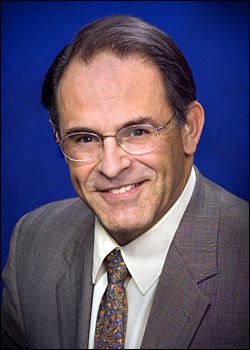 Brookhaven National Laboratory’s Director Samuel Aronson has been named 2012 Laboratory Director of the Year by the Federal Laboratory Consortium for Technology Transfer (FLC). The annual award recognizes federal laboratory directors who have made significant contributions to technology commercialization in their organizations.

“I am tremendously honored to be recognized by the Federal Laboratory Consortium for Technology Transfer,” said Aronson. “Brookhaven Lab has made great strides in increasing the impact of our research by expediting the translation of our discoveries into market applications. I feel fortunate to have played a role in that process, and in strengthening Brookhaven’s research and development partnerships with industry.”

Since becoming lab director in 2006, Aronson has significantly expanded emphasis on the development and commercialization of Lab technologies through patents, licensing, and collaborations with industrial partners, bringing in new sources of revenue and valued research and development relationships. He has played a key role in bridging the gap between basic and applied science, leading to accelerated transfer of Brookhaven technologies to the marketplace. Between 2009 and 2011, 112 inventions were disclosed, 30 patents were issued and 116 commercial and research licenses were executed.

Under Aronson’s direction, the Lab has significantly expanded its partnerships and collaborations within New York State (NY), especially in the area of energy-related research and development. Brookhaven has taken on a major role in the NY State SmartGrid Consortium and the New York Battery and Energy Storage Technology Consortium, and is working closely with upstate corporations – including General Electric and SuperPower – to develop and test new energy technologies.

In 2011, NY State Governor Andrew Cuomo appointed Aronson to the Long Island Regional Economic Development Council, one of 12 councils statewide that developed a strategic plan for economic development and advanced associated regional projects aimed to stimulate commercial vitality. Brookhaven Lab is receiving funding for two projects that made it through the rigorous screening and selection process – one to help develop the next-generation electric grid and another to head up a regional hub for science, technology, engineering, and math education initiatives.

Nationally, as leader of the Executive Committee of the National Laboratory Director’s Council from 2010-2011, Aronson championed the new Agreement to Commercialize Technology (ACT), the first new technology transfer mechanism available to the DOE national laboratories in many years. In this capacity, Aronson helped shape the new DOE technology transfer policy, ensuring that the voices of industry, the national laboratories and stakeholders were heard and translated into action.

Aronson received his Ph.D. in Physics from Princeton University. Before coming to Brookhaven as an associate physicist on the Relativistic Heavy Ion Collider precursor project ISABELLE in 1978, Aronson was a senior research associate at the Enrico Fermi Institute for Nuclear Studies at the University of Chicago and an assistant professor of physics at the University of Wisconsin, Madison. He became chair of the Brookhaven’s Physics Department in 2001, a position he left in 2005 to be the Laboratory’s associate director for High Energy and Nuclear Physics.

Aronson is a Fellow of both the American Physical Society and the American Association for the Advancement of Science.