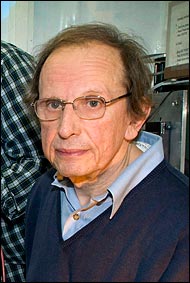 The New York Intellectual Property Law Association (NYIPLA) has honored Radoslav Adzic, a senior chemist at the U.S. Department of Energy’s Brookhaven National Laboratory, with its 2012 Inventor of the Year Award. Adzic was recognized for his extensive work with nanocatalysts that require minimal amounts of platinum for use in hydrogen fuel cells. Adzic’s catalyst could have a tremendous impact on the viability of fuel cell-powered vehicles, which, in turn, could decrease consumption of fossil fuels.

“I am extremely honored to have been chosen for this award,” said Adzic.

Adzic was nominated by Alan Sack, an intellectual property attorney from Locke Lord LLP who, with his team, works with the Lab’s Intellectual Property Legal Group and the Office of Technology Commercialization and Partnerships during the patent application process. Sack, a NYIPLA member who has worked with the Lab since the late 1980s, said that he nominated Adzic based on Adzic’s important work with nanocatalysts and fuel cells, his prolific patent application output, and the significant scientific contributions he has made over his lifetime.

“Radoslav is a very thoughtful scientist. It is a real pleasure working with him,” said Sack. “I am very happy for him and for the Lab that he won.”

Earlier this year, the electrocatalysts and the device used to create them were licensed to N.E. Chemcat Corporation, the leading catalyst and precious metal producer in Japan. With its industrial resources, N.E. Chemcat can create and offer large quantities of the catalyst to the interested laboratories and industries, explained Adzic.

“We have been collaborating with N.E. Chemcat for a couple of years,” Adzic said. “They spent several weeks in our labs, during which they went over the catalyst preparation so they were able to reproduce the results and even perfect the catalyst, make large-scale quantities that can satisfy industrial requirements for fuels cells, and investigate the properties of the catalyst under real conditions of catalyzation in a fuel cell.”

This electrocatalyst presents a novel, scientific remedy to a commercial roadblock — how to make platinum electrocatalysts more durable and affordable. Though platinum is an extremely effective electrocatalyst in the fuel cells of electric vehicles, its cost and its lack of durability and chemical stability make it a difficult sell as a commercially viable green energy solution. To preserve the benefits of platinum while mitigating its negatives, Adzic and his lab devised a new electrocatalyst by coating a hearty palladium alloy nanoparticle with a platinum monolayer, or single atom-thick, shell. Hydrogen/oxygen fuel cells that include the catalyst use hydrogen as a fuel and produce electricity, with water as a byproduct.

“There was actually a lot of skepticism regarding this concept, but we now have proven that the stability and activity of the catalysts are such that they can be applied in a real fuel cell for electric cars,” said Adzic. “We hope that N.E. Chemcat will be successful in marketing this catalyst.”

The award will be presented to Adzic at the NYIPLA 2012 Annual Meeting and Awards Dinner on May 22 at the Princeton Club in New York City.

NYIPLA is a bar association comprised of private, corporate and governmental lawyers who specialize in patent, trademark and copyright law.

Adzic graduated with a B.S. in chemical technology and a Ph.D. in chemistry from the University of Belgrade in 1965 and 1974, respectively. He first came to the Lab in 1979 as a visiting scientist and was hired as a senior research associate in 1992. Adzic was named chemist in 2001 and senior chemist in 2005. Since coming to Brookhaven, Adzic has won a number of awards, including the Medal of the Serbian Chemical Society in 1997, Brookhaven Lab’s Science and Technology Award in 2005, and the 2008 DOE Hydrogen Program R&D Award, in recognition of his work with electrocatalysis for fuel cells. Adzic was elected a Fellow of the Electrochemical Society in 2005.