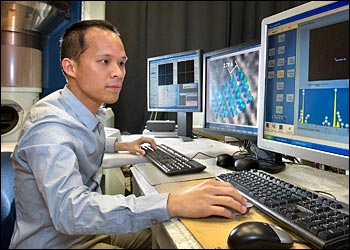 Wei-Fu Chen, lead author of the paper and research associate in the Chemistry Department, examines the atomic structure of the platinum-alternative electrocatalyst.

UPTON, NY – Hydrogen gas offers one of the most promising sustainable energy alternatives to limited fossil fuels. But traditional methods of producing pure hydrogen face significant challenges in unlocking its full potential, either by releasing harmful carbon dioxide into the atmosphere or requiring rare and expensive chemical elements such as platinum.

Now, scientists at the U.S. Department of Energy’s (DOE) Brookhaven National Laboratory have developed a new electrocatalyst that addresses one of these problems by generating hydrogen gas from water cleanly and with much more affordable materials. The novel form of catalytic nickel-molybdenum-nitride – described in a paper published online May 8, 2012 in the journal Angewandte Chemie International Edition – surprised scientists with its high-performing nanosheet structure, introducing a new model for effective hydrogen catalysis.

“We wanted to design an optimal catalyst with high activity and low costs that could generate hydrogen as a high-density, clean energy source,” said Brookhaven Lab chemist Kotaro Sasaki, who first conceived the idea for this research. “We discovered this exciting compound that actually outperformed our expectations.”

Water provides an ideal source of pure hydrogen – abundant and free of harmful greenhouse gas byproducts. The electrolysis of water, or splitting water (H2O) into oxygen (O2) and hydrogen (H2), requires external electricity and an efficient catalyst to break chemical bonds while shifting around protons and electrons. To justify the effort, the amount of energy put into the reaction must be as small as possible while still exceeding the minimum required by thermodynamics, a figure associated with what is called overpotential.

For a catalyst to facilitate an efficient reaction, it must combine high durability, high catalytic activity, and high surface area. The strength of an element’s bond to hydrogen determines its reaction level – too weak, and there’s no activity; too strong, and the initial activity poisons the catalyst. 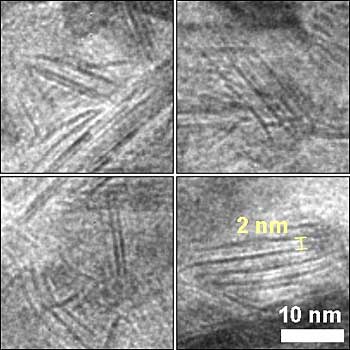 This magnified image from a transmission electron microscope reveals details of the unexpected nanosheet structure of the nickel-molybdenum-nitride catalyst, seen here as dark, straight lines.

“We needed to create high, stable activity by combining one non-noble element that binds hydrogen too weakly with another that binds too strongly,” said James Muckerman, the senior chemist who led the project. “The result becomes this well-balanced Goldilocks compound – just right.”

Unfortunately, the strongest traditional candidate for an electrocatlytic Goldilocks comes with a prohibitive price tag.

Platinum is the gold standard for electrocatalysis, combining low overpotential with high activity for the chemical reactions in water-splitting. But with rapidly rising costs – already hovering around $50,000 per kilogram – platinum and other noble metals discourage widespread investment.

“People love platinum, but the limited global supply not only drives up price, but casts doubts on its long-term viability,” Muckerman said. “There may not be enough of it to support a global hydrogen economy.”

In contrast, the principal metals in the new compound developed by the Brookhaven team are both abundant and cheap: $20 per kilogram for nickel and $32 per kilogram for molybdenum. Combined, that’s 1000 times less expensive than platinum. But with energy sources, performance is often a more important consideration than price.

In this new catalyst, nickel takes the reactive place of platinum, but it lacks a comparable electron density. The scientists needed to identify complementary elements to make nickel a viable substitute, and they introduced metallic molybdenum to enhance its reactivity. While effective, it still couldn’t match the performance levels of platinum. 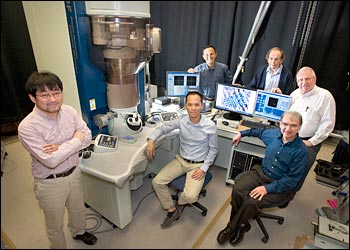 Collaborators on this new electrocatalyst included members of Brookhaven Lab’s Chemistry and Condensed Matter Physics and Materials Science departments, seen here in front of a transmission electron microscope (TEM) capable of capturing nanoscale structures. In the front row, from left, are Kotaro Sasaki, Wei-Fu Chen, Nebojsa Marinkovic; and in the back row, from left, are Yimei Zhu, Radoslav R. Adzic, and James T. Muckerman.

“We needed to introduce another element to alter the electronic states of the nickel-molybdenum, and we knew that nitrogen had been used for bulk materials, or objects larger than one micrometer,” said research associate Wei-Fu Chen, the paper’s lead author. “But this was difficult for nanoscale materials, with dimensions measuring billionths of a meter.”

The scientists expected the applied nitrogen to modify the structure of the nickel-molybdenum, producing discrete, sphere-like nanoparticles. But they discovered something else.

Subjecting the compound to a high-temperature ammonia environment infused the nickel-molybdenum with nitrogen, but it also transformed the particles into unexpected two-dimensional nanosheets. The nanosheet structures offer highly accessible reactive sites – consider the surface area difference between bed sheets laid out flat and those crumpled up into balls – and therefore more reaction potential.

“Despite the fact that metal nitrides have been extensively used, this is the first example of one forming a nanosheet,” Chen said. “Nitrogen made a huge difference – it expanded the lattice of nickel-molybdenum, increased its electron density, made an electronic structure approaching that of noble metals, and prevented corrosion.”

The new catalyst performs nearly as well as platinum, achieving electrocatalytic activity and stability unmatched by any other non-noble metal compounds. “The production process is both simple and scalable,” Muckerman said, “making nickel-molybdenum-nitride appropriate for wide industrial applications.”

While this catalyst does not represent a complete solution to the challenge of creating affordable hydrogen gas, it does offer a major reduction in the cost of essential equipment. The team emphasized that the breakthrough emerged through fundamental exploration, which allowed for the surprising discovery of the nanosheet structure.

“Brookhaven Lab has a very active fuel cell and electrocatalysis group,” Muckerman said. “We needed to figure out fundamental approaches that could potentially be game-changing, and that’s the spirit in which we’re doing this work. It’s about coming up with a new paradigm that will guide future research.”

Additional collaborators on this research were: Anatoly Frenkel of Yeshiva University, Nebojsa Marinkovic of the University of Delaware, and Chao Ma, Yimei Zhu and Radoslav Adzic of Brookhaven Lab.

The research was funded by Brookhaven's Laboratory Directed Research and Development (LDRD) Program. The National Sychrotron Light Source and other Brookhaven user facilities are supported by the DOE Office of Science.