The Horizon Spirit makes the round trip between Los Angeles and Hawaii every two weeks.

UPTON, NY — A Horizon Lines container ship outfitted with meteorological and atmospheric instruments installed by U.S. Department of Energy (DOE) scientists from Argonne National Laboratory and Brookhaven National Laboratory will begin taking data today for a yearlong mission aimed at improving the representation of clouds in climate models. The study, a collaborative effort between DOE’s Atmospheric Radiation Measurement (ARM) program Climate Research Facility and Horizon Lines, marks the first official marine deployment of the second ARM Mobile Facility, AMF2, and is likely the most elaborate climate study ever mounted aboard a commercial vessel. 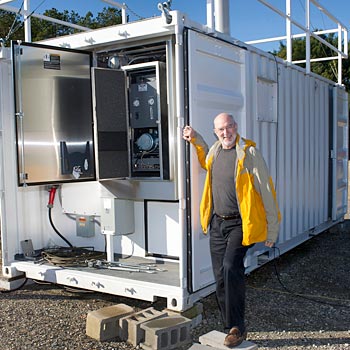 Brookhaven scientist Ernie Lewis and one of the mobile SeaTainer units now installed aboard the Horizon Spirit, a 272-meter cargo ship that will take atmospheric measurements during a yearlong cloud/climate study.

“We are very grateful to Horizon Lines for giving us the opportunity to install our research equipment aboard the Horizon Spirit,” said lead investigator Ernie Lewis, an atmospheric scientist at DOE’s Brookhaven National Laboratory. The Horizon Spirit makes a roundtrip journey from Los Angeles to Hawaii every two weeks, which allows for repeated measurements over the same transect at different seasons.

“Collecting data on a wide range of atmospheric conditions over an entire year, including the transitions among cloud types along this particular route, will give us a large amount of data to help refine and validate models of Earth’s climate,” Lewis said.

The project—dubbed MAGIC, for the Marine ARM GPCI Investigation of Clouds, where GPCI is a project comparing results from the major climate models—will take place through September 2013. 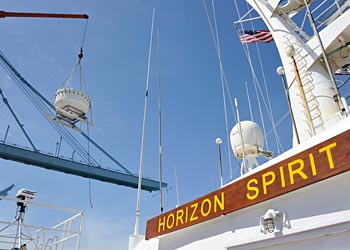 A radar unit being installed on Horizon Spirit.

“We are excited to deploy the AMF2 sensors and the infrastructure that supports them on the Horizon Spirit. This represents the culmination of four years of hard work in designing, building and preparing to deploy aboard an ocean going vessel,” said AMF2 Technical Operations Manager Michael Ritsche, an atmospheric scientist at DOE’s Argonne National Laboratory.

Low marine boundary layer clouds over the ocean exert a large influence on Earth’s climate through reflection of sunlight and by mediating interactions between the atmosphere and the ocean, Lewis explained. However, global climate models have difficulty accurately representing these clouds and the transitions among their different types. Extensive data collection from a marine environment with variable cloud cover could significantly improve these models.

Horizon Spirit’s route from Los Angeles to Hawaii (dashed line) lies adjacent to the GPCI transect that is used to compare climate models (solid line), which also contains specific locations used for other modeling efforts (labeled points). The color scale representing the annual average percentage of low-level cloud cover over the region shows that the route is ideal for assessing the effects of changing cloud conditions.

Horizon Spirit’s route crosses just such a region, making it ideal for assessing the effects of changing cloud conditions. This region is important to a wide range of climate models included in the GPCI project.

“Horizon Spirit’s route from Los Angeles to Honolulu lies almost on top of the GPCI line, providing a great opportunity for extensive data collection,” said Lewis. “We approached Horizon about working together on this project with the idea that our equipment could be installed on the ship with no disruption of their ordinary operations.”

“Horizon Lines is happy to cooperate in the year-long MAGIC project to improve climate modeling,” said Pete Strohla, Vice President of Operating Services at Horizon Lines. “Our hope is that better understanding of climate change will facilitate more accurate weather forecasting, which in turn will help our industry plan safer and more fuel-efficient vessel routes.” 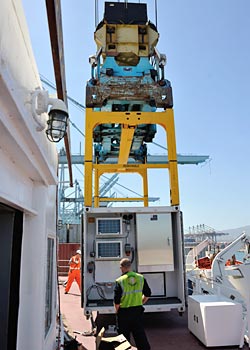 One of the SeaTainer units of the ARM Mobile Facility 2 "touches down" aboard the Horizon Spirit.

A group from Argonne in charge of the deployment has spent the past nine months preparing the instruments and optimizing their performance for shipboard data collection. Many instruments, including an aerosol observing system developed by Brookhaven scientists, are housed in three modified 20-foot SeaTainer cargo containers designed for mobile deployment. Other instruments include radars that are mounted to tables designed to maintain stable “vision” despite the inherent rolling of the ship’s deck as it plies the waves. All of these instruments were installed aboard the Horizon Spirit while it was in port in Los Angeles in September, with final preparations made while en route to Hawaii and back.

“Altogether, the AMF2 comprises a suite of instruments to measure properties of clouds and precipitation, aerosols, and infrared, visible, and ultraviolet light, as well as meteorological and oceanographic conditions,” Lewis said. “These ship-based measurements can provide much more detailed information than can be determined from satellites, and these data will prove a valuable addition to other measurements that have been made in marine conditions, albeit for much shorter periods, for many of these quantities.”

The science team—which includes researchers from DOE’s Lawrence Livermore National Laboratory in addition to Brookhaven, as well as collaborators from NASA, Stony Brook University, and a range of other universities and private consultants—is anxiously anticipating the data that will arise from this endeavor.

“In the end, these data will greatly enhance our understanding of clouds, aerosols, Earth’s energy and water balance, and the interactions among them in the marine environment, providing an unequalled dataset for evaluating and improving climate models," said Lewis. "Our data, which will be placed in the ARM Data Archive, will be made available to anyone who is interested."

MAGIC is funded by the DOE Office of Science.