Designation honors development of 18FDG, a radiopharmaceutical that has revolutionized brain imaging and cancer diagnosis and management worldwide 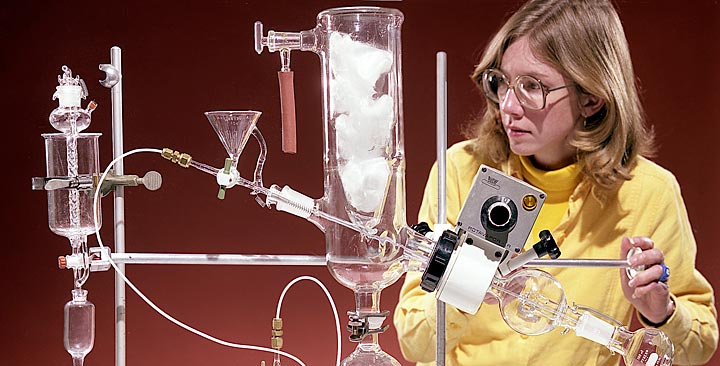 UPTON, NY — The New York Section of the American Chemical Society (ACS) has designated the Chemistry Building at the U.S. Department of Energy’s Brookhaven National Laboratory as an Historic Chemical Landmark *. This designation honors the synthesis of 18FDG, a radiotracer that has had a revolutionary and global impact on cancer diagnosis and management and brain research. Originally synthesized at Brookhaven Lab in 1976 for positron emission tomography (PET) scanning, 18FDG is now the world’s most widely used radiotracer for cancer diagnosis, with more than 1.5 million 18FDG PET scans performed annually.

Chemists at Brookhaven National Laboratory have been world leaders in the synthesis of short-lived radioisotopes for nuclear medicine, under sustained support from the Office of Science at the U.S. Department of Energy, and predecessor offices at the Energy Research and Development Administration and the Atomic Energy Commission. This Historic Chemical Landmark recognizes the synthesis of 2-deoxy-2-[18F]fluoro-D-glucose (18FDG) in 1976 by chemists in the Brookhaven National Laboratory Chemistry Department, and its use to measure glucose metabolism in the living human brain in collaboration with the National Institutes of Health and the University of Pennsylvania. 18FDG is now the standard radiotracer used for positron emission tomography (PET) neuroimaging and cancer diagnosis, with more than 1.5 million 18FDG PET scans performed annually.

“This recognition is a great honor for Brookhaven Lab as a whole, and particularly for the chemists who performed this seminal work, including Joanna S. Fowler and her colleagues, who continue to explore innovative applications for radiotracer and imaging technologies,” said Brookhaven Laboratory Director Samuel Aronson. “The development of 18FDG is also a testament to one of the key strengths of the national laboratories, which bring together scientists from a range of disciplines in an environment that fosters collaborative approaches to address some of our nation’s toughest challenges.”

As Fowler recalls, “We were fortunate to have so much expertise in organic synthesis and radiochemistry with short lived isotopes like fluorine-18 ‘in house’ in Brookhaven’s Chemistry Department—specifically Al Wolf, Tatsuo Ido, Vito Casella, and Chung Nan Wan, who worked directly on the 18FDG problem,” she said. “But we also benefited from the expertise of other scientists at the Lab, including other chemists, physicists, and engineers who worked on early detector technology and advanced our understanding of radioactive elements.”

External collaboration was also essential to the 18FDG success story. The original idea of radioactively “tagging” 2-deoxyglucose (2-DG), a molecule related to glucose, to create a radiotracer that could be used to image metabolic activity in the brain came from Louis Sokoloff at the National Institutes of Health (NIH) and Martin Reivich at the University of Pennsylvania. Glucose is the body’s main source of energy. 2-DG goes wherever glucose is needed in the body. But instead of being completely metabolized to produce energy, it gets trapped at the site of metabolism. So a radioactive tag would give scientists a way to track this glucose stand-in’s location and concentration in the body. Sokoloff and Reivich turned to the chemistry experts at Brookhaven to figure out which isotope to use, where to place it on the 2-DG molecule, and to develop the tricky synthesis technique.

The Brookhaven chemistry group had recently pioneered the development of 18F-labeled elemental fluorine gas. They suggested that this gas could be used to label 2-DG, with the 18F atom substituting for a hydrogen atom at “position 2” on the molecule. They predicted that this configuration would allow the tracer to mimic the behavior of 2-DG.

“At first this seemed like an insurmountable challenge,” recalled Fowler. “Not only did we need to develop a very rapid synthesis from the very reactive fluorine gas, but we had to make enough to make up for radioactive decay for the trip from Brookhaven to Philadelphia, where the imaging would be done. Fortunately, by working at low temperatures and with dilute samples, we were able to ‘tame’ the reactivity,” she said.

After the Brookhaven team synthesized the first samples, NIH collaborators confirmed that the fluorine atom did not otherwise alter the parent molecule. Samples of 18FDG were quickly flown to Pennsylvania, where Reivich and his colleagues first used the tracer to map brain glucose metabolism in humans using the Mark IV scanner developed by David Kuhl. Later, Prantika Som of the Medical Department at Brookhaven published one of the very early papers outlining the use of 18FDG in cancer diagnosis, which has proven to be its most clinically useful application.

“We couldn’t have done this work, or continue what we do today, without the combined expertise of chemists, biologists, physicists, and medical doctors and the long term investment in chemistry and physics by the Department of Energy and its predecessor agencies,” Fowler said.

18FDG is short for 2-deoxy-2-[18F]fluoro-D-glucose, where a radioactive form of fluorine (18F) takes the place of a hydrogen atom. When injected into the bloodstream, 18FDG travels to wherever glucose (energy) is being used.

As the radioactive 18F atoms decay, they emit particles called positrons, identical to electrons but opposite in charge. When positrons and ordinary electrons interact, they annihilate, producing back-to-back gamma rays. These signals, picked up by the circular array of detectors of a positron emission tomography (PET) scanner, can be used to identify the position of the original 18F atom and create pictures of its location within the body. By tracking the tracer over time, scientists can thus monitor site-specific metabolic activity under a variety of conditions.

This groundbreaking technique opened a window to the exploration of a wide range of diseases and conditions, including drug addiction, eating disorders, attention deficit hyperactivity disorder (ADHD), neurodegenerative diseases such as Alzheimer’s, epilepsy, and coronary artery disease.

18FDG PET imaging has also emerged as a revolutionary tool for cancer diagnosis. Because tumor cells have high demand for glucose, 18FDG PET scans can pick out these “hot spots” from surrounding healthy tissue, even before anatomical changes are detected. PET can also help monitor patients’ response to treatment.

The amount of radioactive fluorine incorporated into 18FDG is very small and it decays very quickly. Half of the radioactive atoms have decayed to a non-radioactive element within 110 minutes.

That short “half-life” means patients undergoing 18FDG PET scans receive a very low radiation dose. But it also makes the synthesis of radiotracers very challenging. Compounds must be made and injected quickly to generate useful data.

Display with historical images on the development of 18FDG (click to enlarge).

“Al Wolf, Joanna Fowler, and their colleagues accomplished a tour de force in combining accelerator-based methods for radioactive fluorine production and rapid chemical synthesis to incorporate this isotope into deoxyglucose—and particularly, doing so with the speed required to allow transport to the University of Pennsylvania for experiments to proceed within the several-hour useful lifetime of the tracer,” said Brookhaven Chemistry Department Chair Alex Harris. “We are very honored to have our Chemistry Building designated as an Historical Chemical Landmark to honor this ground-breaking research.”

Besides enabling the widespread use of 18FDG for medical imaging, the methods developed by the Brookhaven team also provided a foundation for the development of a series of other important radiotracers for biological applications, including both neuroimaging and new methods to trace nutrient uptake and metabolic processes in plants—which could point the way toward strategies for improving crop yields and biofuel production.

“This work, built on a strong foundation of basic research funded by federal agencies, continues to produce important results across scientific disciplines, showcasing the long-term value of our nation’s investment in fundamental chemistry,” Harris said.

The development of 18FDG was funded by the Atomic Energy Commission, the predecessor to today’s Department of Energy (DOE). Brookhaven’s current research on radioisotope development and energy applications is supported by the DOE Office of Science. Ongoing neuroimaging research is supported primarily by various agencies of the National Institutes of Health (NIH).