The following press release was issued Wednesday, Feb. 11, by the InterAction Collaboration. The U.S. Department of Energy's Brookhaven National Laboratory participated in the event and invited local photographers on a behind-the-scenes tour of cutting-edge facilities that explore some of the most pressing questions in science. Vote for your favorite submissions at Interactions.org and visit Brookhaven's Physics Photowalk page to learn more.

Vote for your favorite photo among the stunning submissions from the world's top physics facilities, including Brookhaven Lab 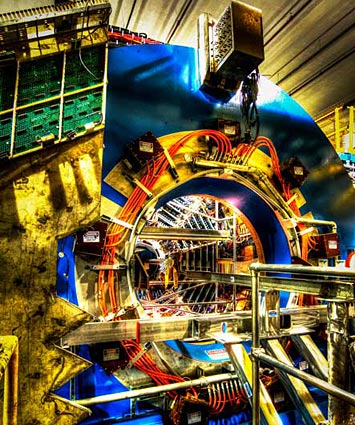 A side view of the STAR detector by Enrique Diaz.

Last September, hundreds of amateur and professional photographers streamed into particle physics laboratories around the world to produce thousands of photographs of state-of-the-art equipment, laboratories and people, in all their beauty and complexity. Now, the citizens of the world are invited to vote for their three favorites as part of the "people's choice" global photowalk competition.

In total, last year's Particle Physics Photowalk brought nearly 400 photographers to 10 leading physics laboratories. After a short pause for downloading, processing and, in some cases, actual developing, the photographers submitted their best photos to a series of local competitions. From these competitions emerged the top 10 photos from each participating country.

View the 40 finalists and cast your vote.

In addition to the people's choice winner, a panel of international judges will select a second global winner. Both winning photos will be announced in March and will be displayed in laboratory exhibits around the world. They will also appear in the particle physics publications symmetry and the CERN Courier.

Photographers joined the Particle Physics Photowalk at these participating laboratories:

In Canada, participants visited and photographed major experimental facilities not usually open to the public including TRIUMF's rare-isotope accelerators, some of the most powerful in the world.

In the United States, highlights included Fermilab's muon storage ring, formerly the lab's antimatter source, and the Collider Detector at Fermilab, a 4,500-ton detector that sits four stories tall and is composed of more than one million individual detector elements. At Brookhaven National Laboratory, visitors were able to explore the Relativistic Heavy Ion Collider, the only particle collider currently operating in the United States, and the National Synchrotron Light Source, which provides intense, focused light for research as diverse as better batteries, new high-performance materials and more effective drug treatments.

For more information on the Particle Physics Photowalk, visit http://www.interactions.org/photowalk, or follow @particlenews on Twitter for the latest updates.

Visit http://www.flickr.com/photos/interactions_photos to view photos from both this year's events and from the first Particle Physics Photowalk, which took place in 2010.

The Particle Physics Photowalk is organized by the InterAction collaboration, whose members represent particle physics laboratories in Asia, North America and Europe.