Thomas Graham of Brookhaven Lab's Nonproliferation and National Security Department to give a talk titled 'Nuclear Stability or Instability in the 21st Century: Will U.S.-Soviet Cold War History Repeat for China, India, and Pakistan?' 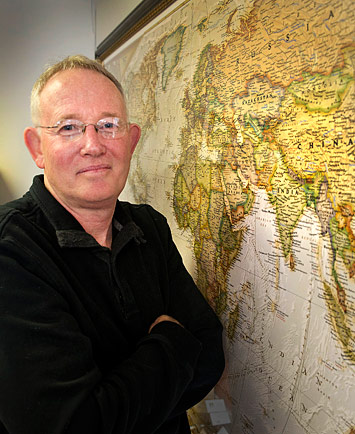 Covert war plans, hidden weapons stockpiles, top-secret containment strategies: Twenty-five years after the end of the Cold War, a cache of declassified documents sheds new light on military and political circumstances that presaged a serious threat of nuclear war between the U. S. and the former Soviet Union.

As technology in the 21st century connects distant points around the globe, and the factors that may lead to conflict become increasingly complex, serious questions arise: What, if any, is the strategic purpose of nuclear weapons and under what circumstances would they be used? And can we learn from the arms race of the past to prevent the deployment of a nuclear bomb in the future?

On Wednesday, February 20, join Thomas Graham, in the Nonproliferation and National Security Department of the U.S. Department of Energy's Brookhaven National Laboratory, for the 484th Brookhaven Lecture, titled "Nuclear Stability or Instability in the 21st Century: Will U.S.-Soviet Cold War History Repeat for China, India and Pakistan?" All are invited to attend this free talk, which is open to the public and will be held in Berkner Hall at 4 p.m. Refreshments will be offered before and after the lecture. Visitors to the Lab ages 16 and older must carry a photo ID while on site.

In addition, China's recent economic and technological growth, India's massive military spending, and Pakistan's alleged export of nuclear technologies to North Korea, Libya, and Iran have many political analysts concerned over new growth in the numbers of nuclear weapons and decisions that affect the circumstances leading to the use of nuclear weapons by India, China, or Pakistan. Graham will discuss how current heads of state, and the incoming U.S. Secretary of Energy, can use the Cold War experiences and events to inform a 21st-century defense strategy capable of stabilizing nuclear capabilities.

Graham earned an A.B. in International Relations from Stanford University in 1977 and Ph.D. in Political Science from MIT in 1989. He joined the Nonproliferation and National Security Department at Brookhaven in 2003.