Talk on "Exploring the Extreme Universe: Results from the VERITAS Gamma-ray Observatory" at Brookhaven Lab March 13 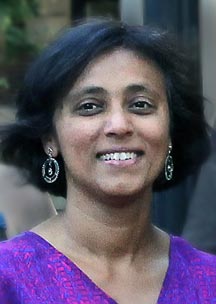 UPTON, NY – Reshmi Mukherjee, a professor of physics and astronomy at Barnard College, Columbia University, NY, will give a talk entitled, "Exploring the Extreme Universe: Results from the VERITAS Gamma-ray Observatory" at the U.S. Department of Energy's Brookhaven National Laboratory on March 13, at 4:00 p.m. in Berkner Hall.  Sponsored by Brookhaven Women in Science (BWIS) and Brookhaven Science Associates, (the company that manages the Lab), the talk is free and open to the public. Visitors to the Laboratory age 16 or older must carry photo I.D.

Very-high-energy gamma-ray astrophysics has emerged as an exciting and vital field, with major discoveries made through experiments in space and on the ground. The Very Energetic Radiation Imaging Telescope Array System, (VERITAS), located in Arizona, is a major ground-based gamma-ray observatory that enables the study of extragalactic and galactic high energy gamma-ray sources.  One of the most exciting sources detected by VERITAS is a type of quasar called a blazar. A blazar is a very compact quasi-stellar object associated with what is thought to be a supermassive black hole. Observations at VERITAS indicate that gamma-rays are an important component of the light-speed jet thought to characterize blazars.

The talk at Brookhaven Lab will outline the scientific motivation for very-high-energy gamma-ray astronomy, describe the techniques involved, and survey the astrophysics of the extreme universe as revealed by gamma ray observations.

Reshmi Mukherjee's research interests are in high-energy astrophysics and astroparticle physics. She uses ground-based atmospheric Cherenkov telescopes to study galactic and extragalactic high-energy gamma-ray sources.  Mukherjee and the VERITAS collaboration use an array of mirrors and ultra sensitive light detectors in the darkness of a desert night to detect the quick flashes of blue Cherenkov light that result from gamma-ray air showers.