Diane Hatton Named One of Brookhaven Town's Women of the Year 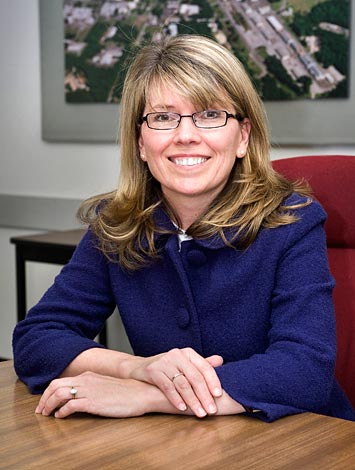 The Town of Brookhaven has recognized Brookhaven National Laboratory's Diane Hatton as one of the 2013 Women of the Year. Hatton was given the honor for her contributions to business.

As the Photon Sciences Directorate Chief Operating Officer and in her former roles within the directorate, she has played an important part in both operations and in the  oversight of the $900 million National Synchrotron Light Source II (NSLS-II) project. Hatton oversees the budget and the management of the staff, who are working to construct the next-generation synchrotron, which will be the highest-performance synchrotron light source in the world and will provide capabilities for both basic and applied research when it opens in 2014.

Hatton has been with Brookhaven National Laboratory since 1983, holding various positions in the area of administration and finance, including department administrator for the Chemistry Department, head of the Budget Group at the National Synchrotron Light Source, and, most recently, her leading role on the NSLS-II project.

"I am honored to have been recognized by Brookhaven Town as one of their Women of the Year," Hatton said. "Brookhaven National Laboratory has provided many opportunities for me during the 30 years that I have been part of the BNL family, including the ability to earn a Bachelor's and Master's degree through the tuition refund program, the provision of a daycare center for my children, and the mentoring and guidance of wonderful colleagues and supervisors."

Hatton began her career at Brookhaven National Laboratory in the clerical pool and said her success at the Lab is due in part to the mentorship of her colleagues and supervisors, including Carol Creutz, who was honored as one of Brookhaven Town's Women of the Year in 1999.

"She saw potential in my work and gave me my first management role at BNL," Hatton said. "I often remember that important turning point in my career and continue to look to find ways to carry on that mentoring tradition at BNL.  Providing guidance, personal development, and stretch opportunities for others is one of the most rewarding parts of my job."

Brookhaven Town Supervisor Ed Romaine congratulated all the recipients of the prestigious award. "Each one has proven to be an exceptional individual who is committed to making their community a better place to live. The way that they live their lives is an inspiration to us all and I thank them for their service," he said in a press release.

Hatton and the 10 other honorees will be celebrated for demonstrating excellence in their endeavors at the 27th Annual Women's Recognition Night on March 21. Each woman was nominated by a member of the community and lives or works in the Town of Brookhaven.