The following news release on a study investigating the effects of treating attention deficit/hyperactivity disorder (ADHD), conducted at the U.S. Department of Energy's Brookhaven National Laboratory, was issued by the journal PLOS ONE.

Long-term treatment of attention deficit/hyperactivity disorder (ADHD) with certain stimulant medications may alter the density of the dopamine transporter, according to research published May 15 in the open access journal PLOS ONE by Gene-Jack Wang and colleagues from Brookhaven National Laboratory and the intramural program at NIH.

"It's really important to understand the biochemical effects these drugs have on the brain so we don't mistake an effect of the drug as a marker for the disease."

Many studies have shown that an acute increase in dopamine signaling while on methylphenidate treatment can improve ADHD symptoms in the short term, but this is the first study to analyze the long-term effects of treatment. 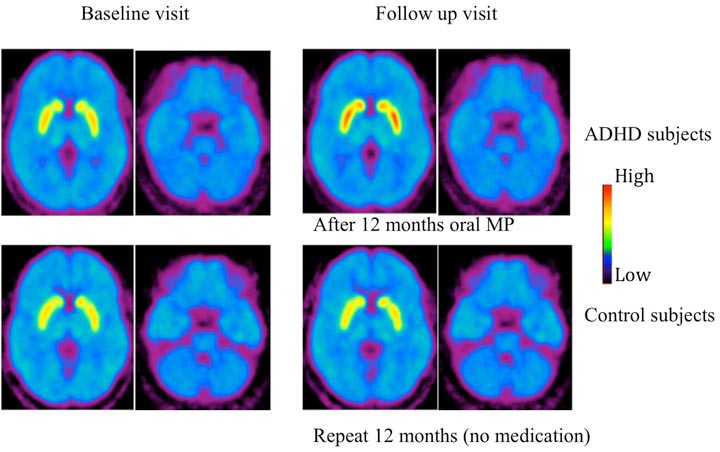 Brain scans show an increase in dopamine transporter levels (more red) after 12 months of treatment with methylphenidate in ADHD patients. Scans of control subjects with no treatment are shown for comparison.

Comment on impact from Dr. Gene-Jack Wang of Brookhaven Lab and Stony Brook University, lead author on the paper:

"It's really important to understand the biochemical effects these drugs have on the brain so we don't mistake an effect of the drug as a marker for the disease. I'm not saying that's definitely the case here, but it could be. Fortunately, our neuroimaging tools allow us to study these questions. The results from this study point to the need to further investigate this question."