UPTON, NY — Jo-Ann Jee, a graduate student at Stony Brook University (SBU) has won the ninth annual Mow Shiah Lin Scholarship. The Asian Pacific American Association at the U.S. Department of Energy's Brookhaven National Laboratory sponsors the scholarship, which consists of $1,000 and a plaque, to honor the distinguished late Brookhaven Lab scientist for whom it was named.

Jee, who earned her B.S in biochemistry at Trinity College, is pursuing a Ph.D. in chemistry with a focus on the synthesis of branched molecules for drug delivery using a multi-component chemical reaction.

"My goal is to apply this technology toward creation of well-defined, targeted drug delivery vehicles," said Jee. "I am grateful to be the recipient of the Mow Shiah Lin Scholarship, which will help me to continue research in this important field."

Jee has presented her research findings at various symposiums at SBU and participated in a poster session at the 2012 National Meeting of the American Chemical Society. She was also the recipient of SBU's 2011 Chemistry Award for First-Year Graduate Student Teaching Assistants. 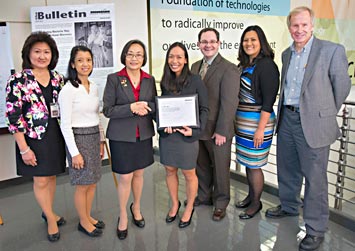