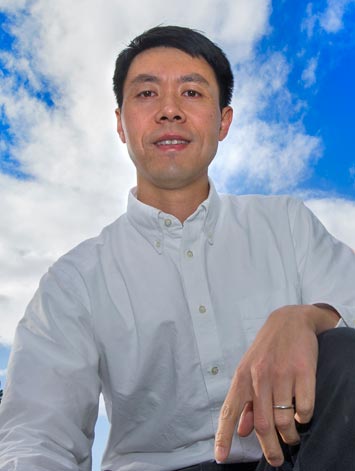 UPTON, NY—Jian Wang, an atmospheric scientist at the U.S. Department of Energy's (DOE) Brookhaven National Laboratory, has been awarded the Kenneth T. Whitby Award in recognition of his outstanding technical contributions to aerosol science and technology. The award honors Wang for developing and implementing new techniques for measuring concentrations and size distributions of tiny particles in Earth's atmosphere and assessing their impact on the formation of clouds and Earth's climate.

Wang received the award at the annual conference of the American Association for Aerosol Research earlier this month. It is given each year to a young scientist recognized by his or her peers in honor of Kenneth T. Whitby, who was known for his contributions to aerosol measurement, the study of aerosol properties and behavior, and the nature of atmospheric aerosols.

"It is a great honor to receive the Whitby award," said Wang. "I feel extremely lucky to have the opportunity to work with many gifted and supportive colleagues, both in the Environmental Sciences Department at Brookhaven Lab and in our Instrumentation Division. I am also very grateful for the continuous support from DOE's Atmospheric System Research program and Brookhaven National Laboratory."

Though tiny, aerosols emitted by industrial processes, wildfires, and other sources can have a big influence on climate—both directly through the absorption and reflection of sunlight, but also indirectly (and less understood) by influencing the formation and lifetimes of clouds. To get a better understanding of these key variables, Wang developed a new instrument for making rapid measurements of aerosol particles, and theoretical methods for incorporating that information into models of cloud formation and assessing climate impacts.

"I feel extremely lucky to have the opportunity to work with many gifted and supportive colleagues, both in the Environmental Sciences Department at Brookhaven Lab and in our Instrumentation Division."

The instrument—a Fast Integrated Mobility Spectrometer (FIMS)—allows rapid, simultaneous sub-micrometer measurements of aerosol size and distribution patterns. It is being commercialized and promises to become the new standard for aircraft based aerosol measurements, which are critical in understanding the properties of atmospheric aerosols and their impacts on climate.  The FIMS has been deployed in several field studies sponsored by DOE's Atmospheric Radiation Measurement (ARM) Climate Research Facility, and will be heading to the Amazon basin to characterize aerosols formed in pollutant outflow from a tropical megacity (Manaus, Brazil) over otherwise pristine background.

The precision measurement of particles' mass concentrations, compositions, and size distributions, along with their optical and cloud-forming properties, are helping scientists better quantify the influence of aerosols generated by human activities such as burning fossil fuels or agricultural fires, and separating these influences from those of naturally occurring atmospheric aerosols such as those formed from sea spray and biogenic hydrocarbons. Wang's work in this area has shown that organics promote the formation of new particles in the atmosphere and strongly influence the ability of particles to take up water, both of which are critical to predict the influences of aerosols on cloud properties.

In addition to his research accomplishments, Wang is becoming a nationally recognized leader at the interface of aerosol science and atmospheric science. Since 2009, he has been a member of the steering committee of DOE's Atmospheric System Research Program (ASR), and co-chair of the Aerosol Lifecycle Working Group within ASR. He has served as an editor of the journal Aerosol Science and Technology, and on review panels for NASA, the National Oceanic and Atmospheric Administration, and the Department of Energy.

"Wang's contributions to aerosol science, already at this early stage of his career, demonstrate an exceptionally high level of innovation and a keen ability to cut to the important issues," said Robert McGraw, head of the Atmospheric Sciences Division of Brookhaven Lab.

Wang earned his Bachelor of Science degree in physical chemistry from the University of Science and Technology of China in 1996, and Masters and Ph.D. degrees in chemical engineering from the California Institute of Technology in 1998 and 2003, respectively. He was a Goldhaber Distinguished Fellow at Brookhaven Lab from 2002-2005, formally joined the staff as an Associate Scientist in 2005, and received tenure in 2010. Since 2005, Wang has also been an affiliate faculty member at the School of Marine and Atmospheric Sciences, Stony Brook University. He is the author of numerous scientific publications, holds two patents with two more pending, and has served as a mentor to undergraduate, graduate, and postdoctoral researchers.

Those who nominated him for the current award emphasized his creative advances and their expectation of further significant impacts "over what promises to be an extraordinarily distinguished scientific career."

Wang's research at Brookhaven Lab is sponsored by the DOE Office of Science.