Mathematician Marjorie Senechal to Talk on "Truth Versus Beauty in Science," at Brookhaven Lab, December 4 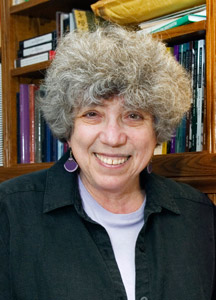 UPTON, NY — Distinguished mathematician Marjorie Senechal will give a talk, "Truth Versus Beauty in Science," at the U.S. Department of Energy's Brookhaven National Laboratory on Wednesday, December 4, at 4 p.m. in the Physics Department conference room, Building 510. Sponsored by Brookhaven Women in Science (BWIS) and Brookhaven Science Associates, the talk is free and open to the public. All are welcome. Visitors to the Laboratory 16 or older must carry photo I.D.

"Beauty is truth, truth beauty," wrote the poet John Keats. "That's beautiful! But is it true?" Senechal will argue that in science, truth and beauty are opposing partners, each mocking the other, and that through their struggle a productive driving force is created. "Truth speaks to the intellect, beauty to the emotions," says Senechal. As a case study, Senechal considers the beautiful five regular polyhedra — flat-sided geometric objects that you may know from geometry class — the cube, tetrahedron, octahedron, icosahedron, and dodecahedron — and Plato's suggestion that they are the shapes of the "elements,"  earth, fire, air, water, and the cosmos. Throughout the centuries, these regular geometrical shapes have changed our views on how we understand physics, astronomy, chemistry, and more. In the early 1800s, mineralogists proposed that the atoms in crystals are arranged in repetitive geometrical patterns, like wall tile designs. Senechal will discuss our evolving understanding of structures, including the emerging idea of "quasicrystals" and how it relates to the icosahedron.

Marjorie Senechal grew up in Lexington, Kentucky. She earned her B.S. from the University of Chicago and M.S. and Ph.D. degrees from the Illinois Institute of Technology, all in mathematics. She is the Louise Wolff Kahn Professor Emerita in Mathematics and History of Science and Technology at Smith College in Northampton, Massachusetts. In addition to her work at Smith, Senechal is also editor-in-chief of the international quarterly journal, The Mathematical Intelligencer. She has also authored several books, including Shaping Space: Exploring Polyhedra in Nature, Art, and the Geometrical Imagination and Quasicrystals and Geometry. Her latest book, I Died for Beauty: Dorothy Wrinch and the Cultures of Science, was released in December 2012.