Western University issued the following news release on March 5, 2014. Physicist Jun Wang and her assistant Jiajun Wang at Brookhaven National Laboratory contributed to the discovery of the new phase of matter seen in carbon-coated battery materials. The collaboration's work may lead to safer and more durable batteries for electric vehicles or grid-scale storage. 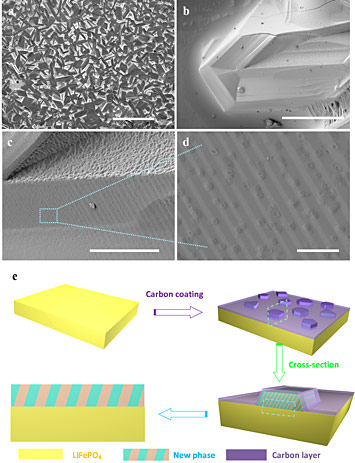 While nobody has killed it, the electric car certainly has its challenges – namely safety, performance and cost.

In an effort to better understand the challenges stalling the electric car, an international research team led by Western University has been investigating batteries and battery materials and have revealed a new underlying mechanical interaction that occurs during the carbon coating process.

In a new study, published in Nature Communications, the researchers have shown for the first time ever that carbon coating not only affects conductivity and performance of battery materials but also alters the chemistry of the battery material's interactive surface.

"We have to find a solution to increase  performance  while maintaining safety, stability, environmental sustainability and cost, so we are developing lithium iron phosphate battery materials with carbon," says Sun, the Canada Research Chair in Development of Nanomaterials for Clean Energy.

Until now, it was not known how carbon coating interacted with LiFePO4 during the manufacturing process. Using advanced measuring techniques, including scanning electron microscope (SEM) imaging, the researchers discovered that the surface of the LiFePO4 battery materials actually may melt during the heating process (which ranges in temperature from 600 to 900 degrees Celsius) and this phase change is size-dependent.

"These findings clarify many debated and unclear happenings, which are common in carbon coated battery materials, and provide answers on how to improve electric vehicle batteries and advance their manufacturing processes," says Jiajun Wang, a research associate supervised by principal investigator Jun Wang at Brookhaven National Laboratory's National Synchrotron Light Source, who previously served as a postdoctoral fellow in Sun's Nanomaterials and Energy Group at Western.

"By carbon coating at a relatively high temperature, the surface of a LiFePO4 battery materials basically becomes a liquid, creating island-shaped phases or pockets on the top of the battery materials, which breaks its conductivity," explains Sun, noting the discovery has yet to solve the problem of building the better electric car battery but having better understanding of the surface chemistry greatly enhances the possibility of achieving the end-goal.

"This discovery is obviously very important for our understanding of the chemistry of carbon-coated LiFePO4 batteries and is very helpful for improving our manufacturing process and product quality," says EngHeng Khoo, Clariant's Vice President, Business Line Energy Storage.

Western delivers an academic experience second to none. Since 1878, The Western Experience has combined academic excellence with life-long opportunities for intellectual, social and cultural growth in order to better serve our communities. Our research excellence expands knowledge and drives discovery with real-world application. Western attracts individuals with a broad worldview, seeking to study, influence and lead in the international community.