The following news release regarding findings from the Baryonic Oscillation Spectroscopic Survey (BOSS) was issued by the Sloan Digital Sky Survey III (SDSS-III) on Monday, April 7, 2014. The U.S. Department of Energy's Brookhaven National Laboratory has been a part of the BOSS collaboration from its inception. See the sidebar for more information about Brookhaven's role, or contact Chelsea Whyte, crwhyte@gmail.com, 631-344-8671, or Peter Genzer, genzer@bnl.gov, 631-344-3174. 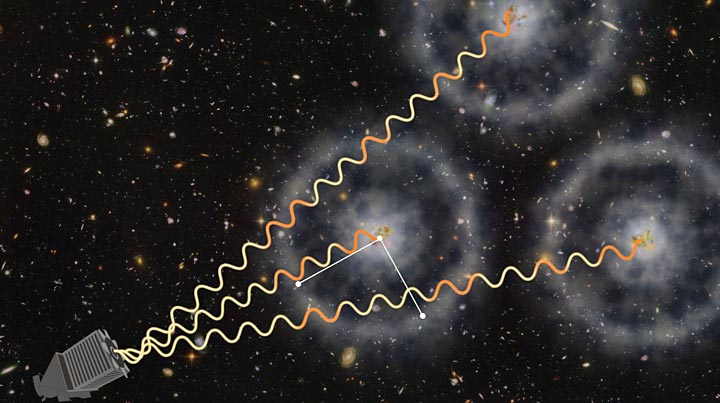 Illustration of the new SDSS measurement of the expansion of the distant universe (artist's conception, not to scale). Light from distant quasars is partly absorbed by intervening gas, which is imprinted with a subtle ring-like pattern of known physical scale. Astronomers have now measured this scale with an accuracy of 2%, precisely measuring how fast the universe was expanding when it was just 3 billion years old.

Astronomers from the Sloan Digital Sky Survey have used 140,000 distant quasars to measure the expansion rate of the Universe when it was only one-quarter of its present age. This is the best measurement yet of the expansion rate at any epoch in the last 13 billion years.

"Quasars in BOSS measure the expansion history of the universe just before the dark energy should have kicked in. If there is funny business going on in the universe at that time, we should be able to detect that!"

The Baryon Oscillation Spectroscopic Survey (BOSS), the largest component of the third Sloan Digital Sky Survey (SDSS-III), pioneered the technique of measuring the structure of the young Universe by using quasars to map the distribution of intergalactic hydrogen gas. Today, new BOSS observations of this structure were presented at the April 2014 meeting of the American Physical Society in Savannah, GA.

Brookhaven's Role in the BOSS Findings

Erin Sheldon was instrumental in making sure that the experiment observed the correct objects in the sky. In every field of view of the telescope, there are hundreds of thousands of celestial objects that can be observed, but the instrument can look at only 1000 objects at a time. Sheldon and collaborators selected appropriate targets for the telescope, including galaxies and quasars that reside in the cosmos at a distance useful for determining what is driving the expansion of the universe.

"It's fun to see all our years of groundwork lead to such beautiful and interesting results," Sheldon said.

Anže Slosar is a senior author on both papers and led one of the two analyses that discovered the baryon acoustic oscillations a year ago.

"These measurements are a real improvement over what we had only a few months ago, so it is amazing to see how fast the field progresses," he said. "Everybody hopes that one day we will see definite evidence that dark energy is not a static vacuum energy, but something more dynamic."

Dark energy is the mysterious force that cosmologists hypothesize is driving the accelerating expansion of the universe. "Quasars in BOSS measure the expansion history of the universe just before the dark energy should have kicked in," Slosar said. "If there is funny business going on in the universe at that time, we should be able to detect that!"

"If we look back to the Universe when galaxies were three times closer together than they are today, we'd see that a pair of galaxies separated by a million light-years would be drifting apart at a speed of 68 kilometers per second as the Universe expands," says Font-Ribera.

BOSS determines the expansion rate at a given time in the Universe by measuring the size of baryon acoustic oscillations (BAO), a signature imprinted in the way matter is distributed, resulting from sound waves in the early Universe. This imprint is visible in the distribution of galaxies, quasars, and intergalactic hydrogen throughout the cosmos.

"Three years ago, BOSS used 14,000 quasars to demonstrate we could make the biggest 3-D maps of the Universe," says David Schlegel (Lawrence Berkeley National Laboratory), principal investigator of BOSS. "Two years ago, with 48,000 quasars, we first detected baryon acoustic oscillations in these maps. Now, with more than 140,000 quasars, we've made extremely precise measures of BAO."

With enough good quasar spectra, close enough together, the position of the gas clouds can be mapped in three dimensions. BOSS determines the expansion rate by using these maps to measure the size of the BAO pattern at different epochs of cosmic time. These new measurements provide key data for astronomers seeking the nature of the dark energy postulated to be driving the increase in the expansion rate of the Universe.

Funding for SDSS-III has been provided by the Alfred P. Sloan Foundation, the Participating Institutions, the National Science Foundation, and the U.S. Department of Energy's Office of Science. This research used resources of the National Energy Research Scientific Computing Center (NERSC), which is supported by the Office of Science. Visit SDSS-III at http://www.sdss3.org.

Brookhaven's role in this research is supported by the DOE Office of Science. DOE's Office of Science is the single largest supporter of basic research in the physical sciences in the United States, and is working to address some of the most pressing challenges of our time. For more information, please visit science.energy.gov.