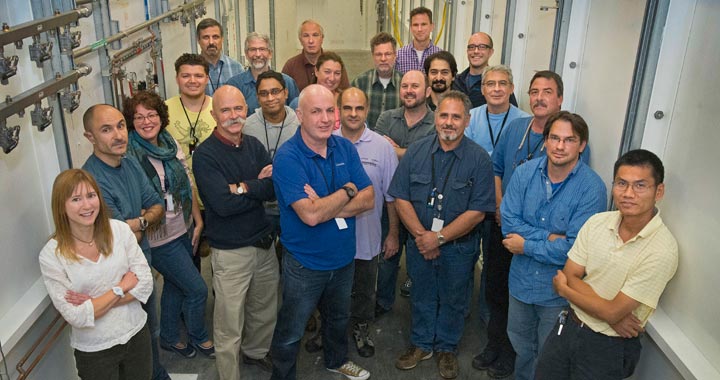 UPTON, NY— Much of our understanding of how living things function comes from knowledge of structures—atomic details of enzymes that catalyze the processes of life, the receptors that are docking stations for viruses and messenger chemicals, and the nucleic acids DNA and RNA that carry genetic blueprints for building cellular machinery, to name a few. To give scientists unprecedented access to these structural details, a new grant just awarded by the National Institutes of Health (NIH) and the U.S. Department of Energy (DOE) will fund the operation of a suite of powerful experimental tools at DOE's Brookhaven National Laboratory.

"With the enhanced capabilities of NSLS-II, researchers will be able to look at smaller specimens of bigger biomolecular complexes and to learn more about them."

The tools, being built with a previous award to Brookhaven Lab of $45 million (M) from NIH in 2010, are being installed at three beamlines at the National Synchrotron Light Source II (NSLS-II), the nation's newest and most advanced state-of-the-art synchrotron research facility and a DOE Office of Science User Facility, nearing completion at Brookhaven Lab. The new five-year grant—an estimated $17.5 M from DOE's Office of Science, and $15.6 M from the NIH's National Institute of General Medical Sciences—will create the Life Science and Biomedical Technology Research Resource (LSBR) to operate these new stations at NSLS-II and to develop new and improved technologies that will enable researchers to address challenging biological questions more effectively.

The new light source—an electron storage ring that produces intense beams of x rays and other forms of light for studies across a wide array of sciences—is set to open in late 2014, replacing its predecessor, NSLS, which is shutting down at the end of September. Compared to the older facility, which has been one of the most productive scientific facilities in the world, NSLS-II will produce light beams that are 10,000 times brighter. Like NSLS, NSLS-II will serve researchers from academia, industry, other National Labs, and Brookhaven Lab.

"With the enhanced capabilities of NSLS-II, researchers will be able to look at smaller specimens of bigger biomolecular complexes and to learn more about them," said Brookhaven's Robert Sweet, the Principal Investigator of the new grant. He will manage the LSBR along with Sean McSweeney, who recently joined the Lab to serve as Photon Science Associate Division Director for Structural Biology and LSBR Director.

"Over the course of its thirty years of operation, NSLS served as a resource for thousands of scientists studying the structure and properties of matter," Sweet said. "Roughly 40 percent of those scientists have studied life science in some form, with many making x-ray diffraction measurements on crystals of proteins, nucleic acids, viruses, and other substances critical to understanding life. We expect that the same will be true at NSLS-II, and designed these new powerful experimental stations specifically to meet these needs."

LSBR will operate the three new NSLS-II beamlines—two for macromolecular crystallography and one for general x-ray scattering studies, plus smaller programs in macromolecular crystallography correlated with optical spectroscopy, and x-ray fluorescence imaging. Between now and 2019 the staff of LSBR, numbering about twelve scientists and ten software specialists, engineers, and technical staff, will finish NSLS operations, help build and commission the new facilities, and then operate them for an extensive user program and for internal research.

The team also plans to foster collaboration among multiple complementary disciplines in an environment where staff scientists and their instruments will share office space, labs, and computational facilities.

"In effect, we are creating a Biology Village," said Sweet.

McSweeney is already expanding on this idea. "We plan interaction with other biology researchers at Brookhaven and beyond," he said. "For example, we will enable studies of plants in their environment, allowing us to follow individual organisms over a wide range of scales with methods including electron microscopy, positron emission tomography, and bioinformatics, to track the appearance, disappearance, and flow of metabolites in the organism. We have a new $4M pilot project funded by the DOE Office of Science (BER) to develop new capabilities for this research.

"The combined investments of DOE and NIH will provide firstly a world-leading synchrotron light source of unparalleled brightness and secondly the suite of tools to exploit this opportunity. Synergistic instrumentation developments will, we expect, lead to great opportunities for new biological science."