The following news release was issued by SLAC National Accelerator Laboratory. In addition to helping guide the scientific mission of the LSST, Brookhaven National Laboratory leads the development of the CCD sensors, the array of precise and sensitive electronics that will capture images within the telescope's 3.2-gigapixel digital camera. For more about the project and Brookhaven's role, visit the Lab's LSST website. 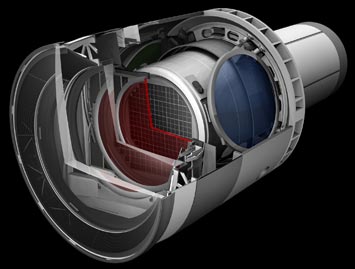 Rendering of the LSST camera. SLAC is leading the construction of the 3,200-megapixel camera, which will be the size of a small car and weigh more than 3 tons. The digital camera will be the largest ever built, allowing LSST to create an unprecedented archive of astronomical data that will help researchers study the formation of galaxies, track potentially hazardous asteroids, observe exploding stars and better understand mysterious dark matter and dark energy. (SLAC National Accelerator Laboratory)

Menlo Park, Calif. — Plans for the construction of the world's largest digital camera at the Department of Energy's SLAC National Accelerator Laboratory have reached a major milestone. The 3,200-megapixel centerpiece of the Large Synoptic Survey Telescope (LSST), which will provide unprecedented details of the universe and help address some of its biggest mysteries, has received key "Critical Decision 2" approval from the DOE.

"This important decision endorses the camera fabrication budget that we proposed," said LSST Director Steven Kahn. "Together with the construction funding we received from the National Science Foundation in August, it is now clear that LSST will have the support it needs to be completed on schedule."

Science operations are scheduled to begin in 2022 with LSST taking digital images of the entire visible southern sky every few nights from atop a mountain called Cerro Pachón in Chile. It will produce the widest, deepest and fastest views of the night sky ever observed. Over a 10-year time frame, the observatory will detect tens of billions of objects—the first time a telescope will catalog more objects in the universe than there are people on Earth—and will create movies of the sky with details that have never been seen before.

"The telescope is a key part of the long-term strategy to study dark energy and other scientific topics in the United States and elsewhere."

LSST will generate a vast public archive of data—approximately 6 million gigabytes per year—that will help researchers study the formation of galaxies, track potentially hazardous asteroids, observe exploding stars and better understand dark matter and dark energy, which make up 95 percent of the universe but whose nature remains unknown.

"The telescope is a key part of the long-term strategy to study dark energy and other scientific topics in the United States and elsewhere," said David MacFarlane, SLAC's director of particle physics and astrophysics. "SLAC places high priority on the successful development and construction of the LSST camera, and is very pleased that the project has achieved this major approval milestone."

The LSST team can now move forward with the development of the camera and prepare for the "Critical Decision 3" review process next summer, the last requirement before actual fabrication of the camera can begin. Components of the camera, which will be the size of a small car and weigh more than 3 tons, will be built by an international collaboration of labs and universities, including DOE's Brookhaven National Laboratory, Lawrence Livermore National Laboratory and SLAC, where the camera will be assembled and tested.

Rendering of the LSST observatory (foreground) atop Cerro Pachón in Chile. When LSST starts taking images of the entire visible southern sky in 2022, it will produce the widest, deepest and fastest views of the night sky ever observed. (Large Synoptic Survey Telescope Project Office)

"Many excellent, hard-working people have been developing LSST for a long time and it is gratifying to see the quality of their efforts being recognized by the DOE approval," said Steve Ritz of the University of California, Santa Cruz, the lead scientist of the camera project. "We are all excited about the amount of great science that LSST will enable."

The effort to build the LSST is a partnership between public and private organizations. Financial support for LSST Design and Development comes from the National Science Foundation, the Department of Energy Office of Science, and private funding raised by the LSST Corporation, a non-profit 501(c)3 corporation formed in 2003, with headquarters in Tucson, AZ. Contributions from private foundation gifts, grants to universities, and in-kind support from laboratories and other LSST Member Institutions were key to early construction and critical developments. The LSST Project Office for central management was established as an operating center under management of the Association of Universities for Research in Astronomy (AURA). The Department of Energy Office of Science funded effort is managed by the SLAC National Accelerator Laboratory (SLAC). Learn more at lsst.org.

SLAC National Accelerator Laboratory is supported by the Office of Science of the U.S. Department of Energy. The Office of Science is the single largest supporter of basic research in the physical sciences in the United States, and is working to address some of the most pressing challenges of our time. For more information, please visit science.energy.gov.