Multi-institutional effort led by Berkeley Lab, called NGEE-Tropics, will couple field research with the development of a new ecosystem model 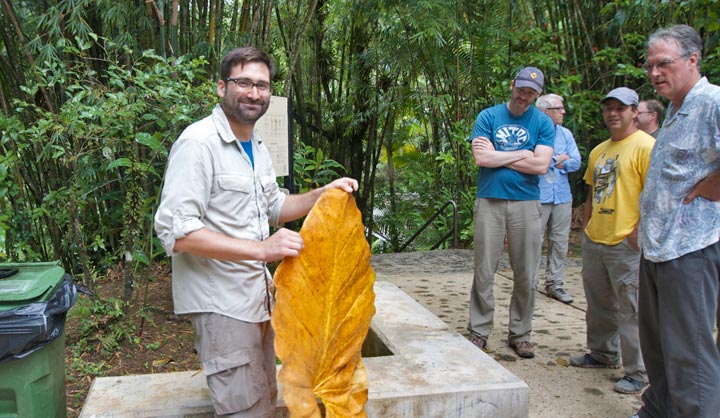 Brookhaven's Shawn Serbin and others attending a science scoping meeting for the NGEE-Tropics project get a hands-on look at their subject matter in the El Yunque National Forest, Puerto Rico.

Tropical forests play major roles in regulating Earth's climate, but there are large uncertainties over how they'll respond over the next 100 years as the planet's climate warms. An expansive new project led by scientists from the U.S. Department of Energy's Lawrence Berkeley National Laboratory (Berkeley Lab) aims to bring the future of tropical forests and the climate system into much clearer focus. Scientists from DOE's Brookhaven National Laboratory will play a major role in this work.

"We'll be helping to develop a new approach to represent tropical forests that will capture the diversity and spatial and temporal variation of these complex ecosystems."

The project is called the Next Generation Ecosystem Experiments-Tropics, or NGEE-Tropics. Its goal is the development of a model that represents how tropical forests interact with Earth's climate in much greater ecological detail than ever before. This will help scientists explore, more accurately than is possible today, how rising temperatures, shifting precipitation patterns, increasing greenhouse gas levels, and other natural and human-induced changes affect tropical forests' influence on Earth's climate.

"Tropical forests cycle more carbon and water than any other biome, and as such they're a critical player in the planet's energy balance and in climate change. But there's a lot we don't know. Through NGEE-Tropics, we plan to dramatically reduce this uncertainty to improve future climate projections," says Jeff Chambers, an ecologist in Berkeley Lab's Earth Sciences Division and the Principal Investigator and Project Director of NGEE-Tropics.

In addition to the roles played by Berkeley Lab and Brookhaven, the effort includes collaborators from Los Alamos, Oak Ridge, and Pacific Northwest national laboratories. The study also includes researchers from the Smithsonian Tropical Research Institute, the U.S. Forest Service, the National Center for Atmospheric Research, NASA, and several institutions from other nations, including Brazil's National Institute of Amazonian Research.

Over the next decade, NGEE-Tropics scientists will collaborate with other researchers to carry out experiments in tropical forests around the globe. This research will fuel the development of a first-of-its-kind tropical forest ecosystem model that extends from the bedrock to the top of the forest canopy. The model will capture myriad soil and vegetation processes at a resolution better than ten kilometers. This is the resolution that next-generation Earth system models will achieve during the project's lifetime. 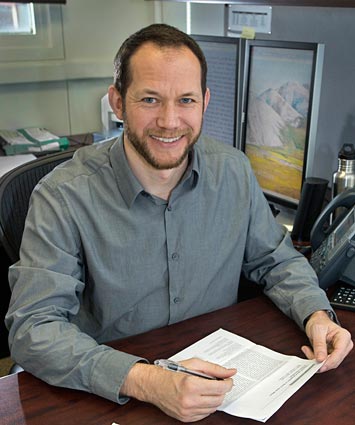 Alistair Rogers brings expertise in plant biology to the challenge of understanding ecosystem-climate interactions in the Arctic and the tropics.

"Current Earth system models treat the tropics in an overly simplistic way that fails to capture the magnitude, spatial variation, and seasonality of changes in variables such as plants' carbon dioxide (CO2) uptake," said Alistair Rogers, a Brookhaven biologist involved in the study. The Brookhaven scientists will make use of sophisticated computational methods, remote sensing, and new data synthesis techniques through all phases of the study to identify data gaps, improve model projections with new observations or representations of processes such as photosynthesis and carbon allocation, and integrate new data collected at a range of scales to help overhaul the models.

During the first phase of the project, which spans the next three years, scientists will assess what's known about tropical forest ecosystems and how well these processes are represented in models. Several pilot field studies will also be developed in phase one that link modeling advances with field observations.

One high-priority activity in phase one will explore how tropical forests respond to reduced precipitation, which is expected in some tropical regions. The study, in Manaus, Brazil, will investigate changes in the forest carbon cycle resulting from low water supply during the dry season from June through September. This is important for understanding whether tropical forests will respond to drought by releasing instead of accumulating carbon.

In another phase one activity in Puerto Rico, NGEE-Tropics scientists will study how soil fertility affects the regrowth of forests on abandoned agricultural land. These so-called secondary forests are known to take up CO2 from the atmosphere and store it for decades, but the rate of uptake is thought to depend on soil fertility. The research will involve measurements of phosphorus and nitrogen across different soil types. It will also involve airborne instruments, such as LiDAR to measure the forest structure and optical sensors to study the chemistry of the forest canopy. 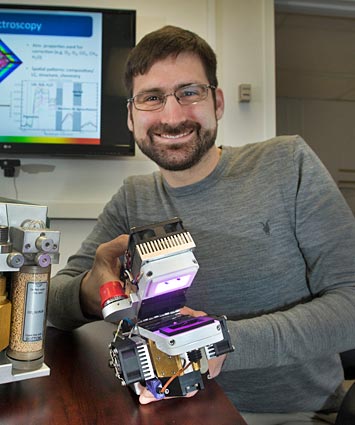 "Leveraging remotely sensed data at the leaf to ecosystem scales, we will develop novel scaling approaches that enable us to map key traits governing the fluxes of carbon from plants, and use this new information to inform model forecasts in a manner not previously possible," said ecologist Shawn Serbin, the other Brookhaven scientist on the team.

And in Panama, scientists will use detailed datasets of species by species differences across regions to understand which characteristics enable some species to thrive under warmer or drier conditions, while others perish. The research will shed light on how forests dynamically respond to a warming climate.

Ultimately, the scientists will integrate what they learn from the pilot studies, and the more extensive field investigations in phases two and three, into their new tropical forest model.

"Our process-rich model will be applied within an Earth system model, and will greatly improve our understanding of how tropical forests respond to changes coming over the next century," says Chambers.

Said Rogers, "As we complete this synthesis and quantification of uncertainty, we will begin to test and further develop ways to incorporate the important properties of plants that are critical inputs to these models—and do this in a way that can be scaled up to the ecosystem level. In collaboration with our NGEE-Tropics partners, we'll be helping to develop a new approach to represent tropical forests that will capture the diversity and spatial and temporal variation of these complex ecosystems."