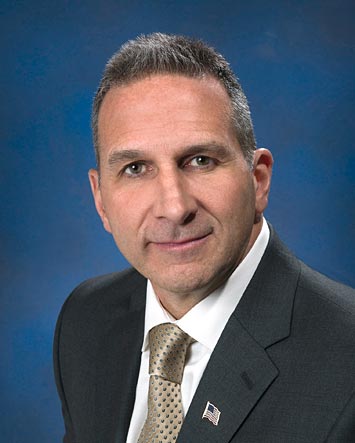 UPTON, NY — John F. Carney, Jr. has been named manager of the Laboratory Protection Division at the U.S. Department of Energy's Brookhaven National Laboratory, effective May 18.

The Laboratory Protection Division at Brookhaven consists of Fire Rescue, the Police Group, Security Operations, and the Office of Emergency Management. Carney will oversee emergency and medical response, site security, protection of sensitive information, and emergency planning for the 5,300-acre Laboratory complex staffed by approximately 2,850 scientists, engineers and support personnel. The Lab site has over 350 buildings and a large inventory of scientific, technical, and office equipment and hosts more than 3500 visiting scientists and thousands of community visitors each year.

"Brookhaven Lab is a world-class research institution and my mission is to ensure that every facility and employee, visitor, and guest is safe and secure," said Carney. "I will work hard to accomplish this essential task that will help keep Brookhaven a leader in world-class science and a safe workplace."

"I believe one of my greatest strengths is my ability to interact with colleagues at all levels," added Carney. "I am looking forward to fostering a team-oriented environment at Brookhaven Lab that enhances and provides continuity of its already successful emergency management programs."

Carney comes to Brookhaven after a 30-year career as a police officer with the Nassau County Police Department (NCPD) where his focus was on special operations, emergency management, and community policing.

Carney joined the NCPD as a police officer in 1985. From 1988 to 1991 he was a police academy instructor overseeing police recruits and the development of course and curriculum requirements. In 1993, he became a precinct supervisor and field training officer before taking on the role of special patrols supervisor, overseeing the community response and school resource program in 1998. Many of the community programs initiated by Carney and his team remain in effect today.

In 2001, Carney was assigned to the Bureau of Special Operations taking on a lead position in tactical training and department-wide emergency exercise development and evaluation. He has been a liaison across federal, state, and local organizations, implementing both a potentially life-saving tactical emergency casualty care component that will be expanded to all NCPD patrol officers, and a training program that addresses active shooter response. Following the events of 9-11, Carney was tasked with developing patrol and response protocols and assessment of vulnerabilities of infrastructure and facility protection.

In 2013, Carney earned his B.S. in Emergency Services Administration from Adelphi University. In addition, he holds many certifications in the field of emergency management including, Incident Command Systems, Special Events Contingency Planning, Critical Infrastructure (all from the Department of Homeland Security), Special Weapons & Tactics, and Intelligence-based Risk Assessment (from the Federal Bureau of Investigation). In addition, Carney has received numerous awards for outstanding achievements including a medal commendation for leading a successful hostage rescue operation and "Top Cop of the Month" award on two occasions.