The following news release about the restart of the Large Hadron Collider (LHC) is being issued by the U.S. Department of Energy's Brookhaven National Laboratory on behalf of the Department of Energy and the U.S. LHC organization: http://uslhc.web.cern.ch/. In addition to serving as the U.S. host laboratory for the ATLAS experiment at the LHC, Brookhaven National Laboratory plays multiple roles in this international collaboration, from construction and project management to data storage, distribution, and analysis. For more information about Brookhaven's role in research at ATLAS, see: http://www.bnl.gov/atlas/. To interview Brookhaven Lab scientists about the start of the new physics run at ATLAS, please contact Karen McNulty Walsh,kmcnulty@bnl.gov, 631-344-8350.

U.S. Joins the World in a New Era of Research at the Large Hadron Collider

Today scientists at the Large Hadron Collider at CERN, the European research facility, started recording data from the highest-energy particle collisions ever achieved on Earth. This new proton collision data, the first recorded since 2012, will enable an international collaboration of researchers that includes more than 1,700 U.S. physicists to study the Higgs boson, search for dark matter and develop a more complete understanding of the laws of nature. 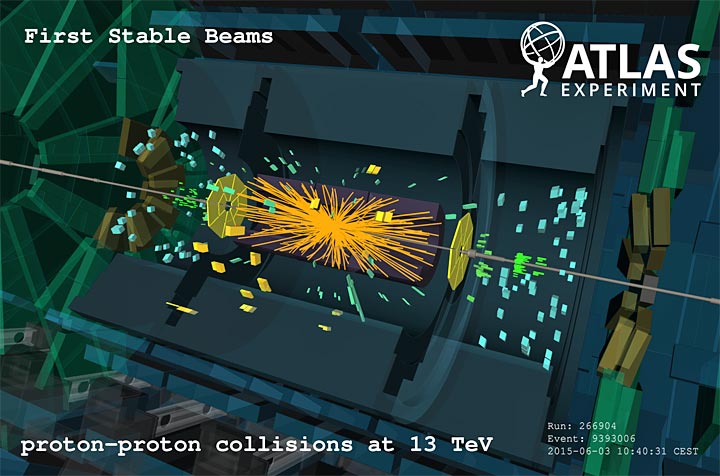 Display of a proton-proton collision event recorded by ATLAS on 3 June 2015, with the first LHC stable beams at a collision energy of 13 TeV. Tracks reconstructed from hits in the inner tracking detector are shown as arcs curving in the solenoidal magnetic field. The green and yellow bars indicate energy deposits in the liquid argon and scintillating-tile calorimeters. Image credit: CERN

"Together with collaborators from around the world, scientists from roughly a hundred U.S. universities and laboratories are exploring a previously unreachable realm of nature," said James Siegrist, the U.S. Department of Energy's associate director of science for high-energy physics. "We are very excited to be part of the international community that is pushing the boundaries of our knowledge of the universe."

The Large Hadron Collider, the world's largest and most powerful particle accelerator, reproduces conditions similar to those that existed immediately after the Big Bang. In 2012, during the LHC's first run, scientists discovered the Higgs boson—a fundamental particle that helps explain why certain elementary particles have mass. U.S. scientists represent about 20 percent and 30 percent, respectively, of the ATLAS and CMS collaborations, the two international teams that co-discovered the Higgs boson. Hundreds of U.S. scientists played vital roles in the Higgs discovery and will continue to study its remarkable properties.

"We have seen first data beginning to flow. Let's see what they will reveal to us about how our universe works."

Scientists will use this new LHC data to pin down properties of the Higgs boson and search for new physics and phenomena such as dark matter particles—an invisible form of matter that makes up 25 percent of the entire mass and energy of the universe. Physicists will also endeavor to answer questions like: Why is there more matter than antimatter? Why is the Higgs boson so light? Are there additional types of Higgs particles? What did matter look like immediately after the Big Bang?

"NSF-funded researchers at ATLAS, CMS and LHCb are investigating some of nature's most fundamental properties at collision energies never before explored. The potential for transformative discoveries is profound," said Denise Caldwell, NSF's division director for physics. "We eagerly look forward to LHC operation at almost twice the energy of any other particle accelerator on Earth."

The ATLAS detector at the Large Hadron Collider, an experiment with large involvement from physicists at Brookhaven National Laboratory. Image credit: CERN

The LHC was turned off in early 2013 and engineers spent two years preparing the machine to collide particles at a much higher energy and intensity. During the shutdown U.S. scientists and their international collaborators installed several new components in the four LHC detectors. These components, together with other upgrades, will allow physicists to record more information about the particles produced during the high-energy collisions.

These upgrades included a new detector in the heart of the ATLAS experiment, several new muon detectors on the outer shell of the CMS experiment, a new calorimeter inside the ALICE experiment, and an innovative new data sorting system for the LHCb experiment. U.S. scientists played vital roles in the design and instrumentation of these new systems and will operate several of the detector components throughout the next three years of data collection.

Once collected at CERN in Geneva, Switzerland, the new LHC data travels the globe. New fiber optic cables recently installed by the U.S. Department of Energy bring the data to computers and data centers at eighteen U.S. institutions, which provide 35 percent of the worldwide computing power for the CMS experiment and 23 percent for the ATLAS experiment.

The upgraded LHC will also generate data at a much faster rate. Scientists predict they will match the amount of data generated throughout the collider's first three-year run within the next five months, eventually accumulating 10 times more data by the end of 2017. These collisions will also produce Higgs bosons 25 percent faster and will increase the chances of seeing other theoretical particles, such as those predicted for supersymmetry, by over 40 percent.

"The first 3-year run of the LHC, which culminated with major discovery in July 2012, was only the start of our journey. It is time for new physics!" said CERN Director General Rolf Heuer. "We have seen first data beginning to flow. Let's see what they will reveal to us about how our universe works."

CERN, the European Organization for Nuclear Research, is the world's leading laboratory for particle physics. It has its headquarters in Geneva. At present, its Member States are Austria, Belgium, Bulgaria, the Czech Republic, Denmark, Finland, France, Germany, Greece, Hungary, Israel, Italy, the Netherlands, Norway, Poland, Portugal, Slovakia, Spain, Sweden, Switzerland and the United Kingdom. Romania is a Candidate for Accession. Serbia is an Associate Member in the pre-stage to Membership. India, Japan, the Russian Federation, the United States of America, Turkey, the European Union, JINR and UNESCO have Observer Status.

The National Science Foundation (NSF) is an independent federal agency that supports fundamental research and education across all fields of science and engineering. In fiscal year (FY) 2015, its budget is $7.3 billion. NSF funds reach all 50 states through grants to nearly 2,000 colleges, universities and other institutions. Each year, NSF receives about 48,000 competitive proposals for funding, and makes about 11,000 new funding awards. NSF also awards about $626 million in professional and service contracts yearly.