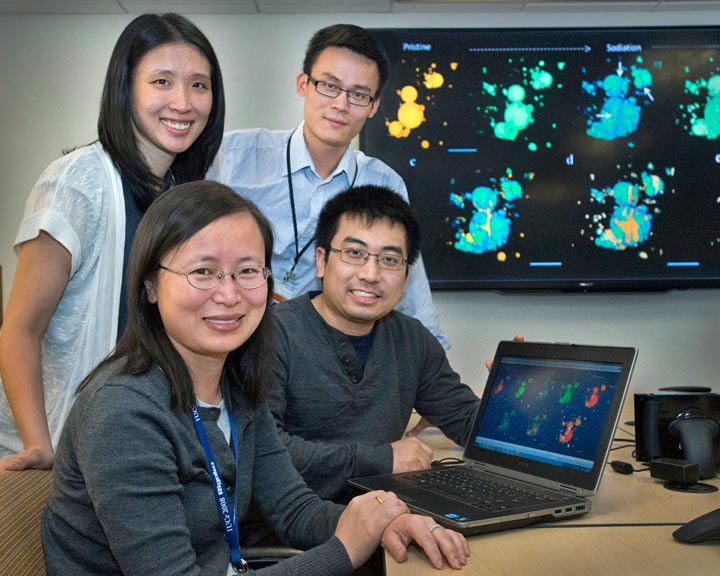 Though light and efficient lithium-ion batteries make up the backbone of our mobile lifestyle, a new, cheaper contender in the battery realm may now give them a run for their money. A new study, published June 26 in Nature Communications, finds that degradations of battery material in sodium-ion batteries may not be the simple case it was assumed to be – namely, that they are worse as compared to lithium-ion batteries.

"What we found in this study is a surprising twist on conventional thought, that sodium ions always lead to more severe fractures in the electrode than lithium ions," said physicist Jun Wang, who works at the National Synchrotron Light Source II (NSLS-II) at the U.S. Department of Energy's Brookhaven National Laboratory, and who led this research at the original NSLS. "This could result in a revolution in battery research and impact advances in the development of cheap, efficient sodium-ion batteries."

The makeup of lithium-ion batteries has been widely studied, while relatively little is understood of the electrochemical mechanism of sodium-ion batteries. To remedy this, Wang and her team used a newly developed full-field transmission X-ray microscope operated at the X8C beamline at the now closed National Synchrotron Light Source, to perform high-resolution 3D images of the structure of the batteries during sodiation and desodiation– the electrochemical reaction in sodium-ion batteries during the charge and discharge cycle.

Visualizing this process in 3D and without interrupting the normal cycle of the battery – or in situ in scientific speak – will give valuable information about the processes within the sodium-ion batteries. But considering the three-dimensional electrode orientation and the possibility of directionally dependent electrochemical reactions, these 3D visualizations can be challenging to obtain for sodium-ion batteries. The highly chemically active sodium metal and its sluggish kinetics also pose significant challenges, especially compared to lithium, for in situ electrochemical cells such as safety, sealing, and durability. The slow sodium-ion diffusion and electrochemical reaction also demand more time to complete electrochemical measurement and data collection and analysis.  The team of the researchers overcame these difficulties and successfully designed a working battery cell to truly monitor the microstructural evolution during ten charge and discharge cycles.

Like most materials that interact with salt, sodium-ion batteries swell and shrink during sodiation and desodiation. This change in volume can result in fractures or pores in the battery material, which breaks down the ability to transfer charge. To see just what happens on the nanometer scale, Wang and her team performed in-situ 3D visualizations – meaning they charged and discharged the battery while exposing it to x-rays – during ten electrochemical cycles.

At the beginning of the sodiation process, tin particles expand only slightly and the overall structures within the battery remain the same. After further sodiation, severe expansion occurs and the researchers observed many cracks in the material. But during the following desodiation process, the extraction of the sodium ions didn't result in structural failures as they expected.

These results hold promise for sodium-ion batteries, which are made up of cheap and abundant battery-grade salts. As we rely more and more on portable electronics, sodium-ion batteries could prove to be a cost-effective source of energy with staying power.

Christopher Eng and Yu-chen Karen Chen-Wiegart also contributed to this work. The transmission X-ray microscope used in this study will be installed at the Full-field X-ray Imaging (FXI) beamline at the new National Synchrotron Light Source II (NSLS-II), a $912 million facility opened at Brookhaven National Laboratory in 2014. NSLS-II is the world's brightest synchrotron light source and, like the NSLS that it has replaced, is a DOE Office of Science User Facility.

This research was funded as a Laboratory Directed Research and Development project at Brookhaven Lab and by the DOE Office of Science (BES). The transmission x-ray microscope used in this work was built with funding from the American Recovery and Reinvestment Act.