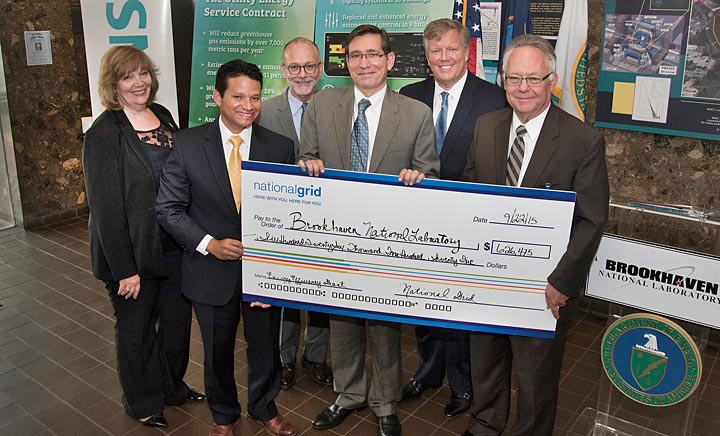 UPTON, NY — Representatives from the U.S. Department of Energy (DOE), Brookhaven National Laboratory, National Grid, and Siemens today celebrated the completion of significant infrastructure upgrades at Brookhaven Lab designed to substantially reduce the Lab's energy costs and greenhouse gas emissions.  The work was performed under a Utility Energy Service Contract (UESC) with National Grid and Siemens, under which National Grid facilitated third-party financing in the amount of $14.85 million to implement lighting and other energy-efficiency upgrades at the Laboratory. The Laboratory will repay the loan using the savings generated by the upgrades, which are expected to total more than $1.3 million each year.

"Through this contract, we're reducing emissions, saving money, and fostering public/private partnership. The UESC at Brookhaven National Lab is a formula for success."

UESCs are one of DOE's contract vehicles for implementing energy conservation and cost-savings projects at government facilities.  Under a UESC, the local utility—in this case National Grid—facilitates the design, finance, and construction of the project. The contract term is 10 years. Brookhaven's is the first DOE UESC in more than 15 years, and is a departure from traditional contracts typically used at other DOE labs with private contractors for energy-saving projects. The project is expected to serve as a model for other laboratories throughout the DOE complex.

"This contract will reduce the Laboratory's energy costs and help us meet DOE and federal energy and greenhouse gas reduction goals—consistent with New York State's green energy agenda," said Brookhaven Lab Director Doon Gibbs. "It also enables us to leverage our operating funds to invest in infrastructure improvements that support our science mission."

The improvements are expected to reduce the Laboratory's annual energy intensity by approximately 11 percent compared to baseline measurements, and reduce greenhouse gas emissions by over 7,000 metric tons. The savings from the UESC combined with other sustainability efforts will help the Laboratory meet its 30-percent energy intensity reduction goal for 2015, as well as a 28-percent greenhouse gas reduction goal for 2020.

"National Grid is excited to partner in this innovative project with Brookhaven Lab. This new approach will require a new regulatory model that broadens the mandate of utilities to be more accountable for policy outcomes, such as promoting cleaner energy, advancing innovative technologies, and driving economic growth," said Mike Ruiz, Director of Community and Customer Management, National Grid.

Work on the project began in December 2013. Under a UESC, projects are managed through an Energy Service Company (ESCo) that is under contract to the utility. Siemens served as the ESCo for this project, and completed it in May 2015 on time and within budget.

"We are honored to be part of this Brookhaven National Laboratory energy efficiency project," said Dave Hopping, president of Siemens' North American-based Building Technologies Division. "This UESC is a solid example of how close collaboration among all stakeholders leads to success, and is a model that organizations across the country can leverage to help meet energy efficiency goals."

Brookhaven just made the first loan payment of $1.7 million, and will make additional savings-generated payments annually for the next 10 years. In addition to direct cost savings, the energy-efficiency improvements will make the Lab eligible for rebates and other financial incentives, amplifying the savings for the Lab over time.