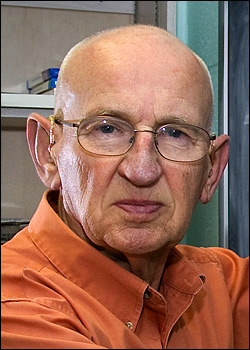 UPTON, NY — The inaugural American Physical Society (APS) Division of Particles and Fields Instrumentation Award has been presented jointly to David Nygren of the University of Texas at Arlington and Veljko Radeka of the U.S. Department of Energy's (DOE) Brookhaven National Laboratory. Nygren and Radeka received the award during the APS "New Technologies for Discovery" Workshop on October 5, 2015, at the University of Texas at Arlington.

The award citation notes that Nygren and Radeka were honored "for widespread contributions and leadership in the development of new detector technologies and low-noise electronics instrumentation in particle physics as well as other fields, and in particular work leading to the development and instrumentation of large volume liquid argon time projection chambers that are now a key element in the global particle physics program."

The APS Division of Particles and Fields Award honors exceptional contributions to instrumentation and will be bestowed annually. The Award recognizes those advancing the field of particle physics through the invention, refinement, or application of instrumentation and detectors.

"I am honored to be a co-recipient of this inaugural APS Division of Particles and Fields award with David Nygren," said Radeka. "It is very gratifying that novel, often speculative radiation instrumentation development—with an impact on science beyond what could be foreseen—is being recognized by this new award."

Measuring the tracks of charged particles with exquisite precision has long been and continues to be one of the challenges of particle physics detectors. Nygren was recognized for his invention of the Time Projection Chamber (TPC) used to study highly energetic electron-positron collisions in the Positron-Electron Project's PEP-4 detector at SLAC National Laboratory.

In a TPC, ionization clusters are created when charged particles interact with a liquid or gas medium that fills the chamber.  As each cluster drifts toward a collection anode its position and arrival time are measured. The time is thereby "projected" onto the collection anode.

TPCs have been a workhorse in particle physics experiments at CERN's Large Electron-Positron Collider and Large Hadron Collider, at the Relativistic Heavy Ion Collider, a DOE Office of Science User Facility used for nuclear physics research at Brookhaven National Laboratory, and also in neutrino detectors.

Radeka and his colleagues, along with with Yale University's Bill Willis, developed the first noble liquid argon calorimeters, which have been used in many high-energy physics experiments. Offering high precision, these calorimeters are at the heart of the ATLAS experiment at the Large Hadron Collider, and played a key role in the discovery of the Higgs particle. Radeka also developed the highly sensitive low-noise electronics needed for readout of the small signals from these detectors.  He and his colleagues are recognized as world leaders in the recent development of "cold electronics", which are designed to operate in a cryogenic liquid medium, much enhancing TPC performance.

These two significant contributions to particle physics instrumentation are now being combined in the Deep Underground Neutrino Experiment (DUNE), a global neutrino project based at Fermi National Accelerator Laboratory. DUNE and a smaller, short-range neutrino experiment at Fermilab known as MicroBooNE will employ a Time Projection Chamber as detector combined with ultra-sensitive low-noise cold electronics to study the properties of the elusive neutrino.

Radeka first joined Brookhaven's Instrumentation Division as a visiting scientist in 1962, and served as the division head for 40-plus years. Under his direction, the Instrumentation Division became a leading resource in the Department of Energy for research on radiation detectors and microelectronics, and its work has impacted a spectrum of scientific disciplines.

Radeka earned a Ph.D. in engineering sciences of the University of Zagreb, Croatia, in 1961. He personally holds two instrumentation patents and has authored or co-authored  more than 200 publications. He is a Life Fellow of the Institute of Electrical and Electronics Engineers (IEEE), a Fellow of the American Physical Society, and a recipient of IEEE's Centennial Medal in 1984, Harold Wheeler Award in 2009, and Marie Sklodowska-Curie Award in 2013.