Supercomputing the Strange Difference Between Matter and Antimatter

UPTON, NY—An international team of physicists including theorists from the U.S. Department of Energy's (DOE) Brookhaven National Laboratory has published the first calculation of direct "CP" symmetry violation—how the behavior of subatomic particles (in this case, the decay of kaons) differs when matter is swapped out for antimatter. Should the prediction represented by this calculation not match experimental results, it would be conclusive evidence of new, unknown phenomena that lie outside of the Standard Model—physicists' present understanding of the fundamental particles and the forces between them.

The current result—reported in the November 20 issue of Physical Review Letters—does not yet indicate such a difference between experiment and theory, but scientists expect the precision of the calculation to improve dramatically now that they've proven they can tackle the task. With increasing precision, such a difference—and new physics—might still emerge.

"This so called 'direct' symmetry violation is a tiny effect, showing up in just a few particle decays in a million," said Brookhaven physicist Taku Izubuchi, a member of the team performing the calculation. Results from the first, less difficult part of this calculation were reported by the same group in 2012.  However, it is only now, with completion of the second part of this calculation—which was hundreds of times more difficult than the first—that a comparison with the measured size of direct CP violation can be made.  This final part of the calculation required more than 200 million core processing hours on supercomputers, "and would have required two thousand years using a laptop," Izubuchi said.

The calculation determines the size of the symmetry violating effect as predicted by the Standard Model, and was compared with experimental results that were firmly established in 2000 at the European Center for Nuclear Research (CERN) and Fermi National Accelerator Laboratory. 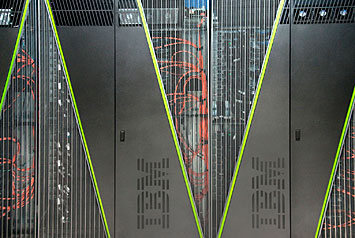 Supercomputers such as Brookhaven Lab's Blue Gene/Q were essential for completing the complex calculation of direct CP symmetry violation. The same calculation would have required two thousand years using a laptop.

"This is an especially important place to compare with the Standard Model because the small size of this effect increases the chance that other, new phenomena may become visible," said Robert Mawhinney of Columbia University.

"Although the result from this direct CP violation calculation is consistent with the experimental measurement, revealing no inconsistency with the Standard Model, the calculation is on-going with an accuracy that is expected to increase two-fold within two years," said Peter Boyle of the University of Edinburgh. "This leaves open the possibility that evidence for new phenomena, not described by the Standard Model, may yet be uncovered."

Physicists' present understanding of the universe requires that particles and their antiparticles (which have the same mass but opposite charge) behave differently. Only with matter-antimatter asymmetry can they hope to explain why the universe, which was created with equal parts of matter and antimatter, is filled mostly with matter today. Without this asymmetry, matter and antimatter would have annihilated one another leaving a cold, dim glow of light with no material particles at all.

The first experimental evidence for the matter-antimatter asymmetry known as CP violation was discovered in 1964 at Brookhaven Lab. This Nobel-Prize-winning experiment also involved the decays of kaons, but demonstrated what is now referred to as "indirect" CP violation. This violation arises from a subtle imperfection in the two distinct types of neutral kaons.

The target of the present calculation is a phenomenon that is even more elusive: a one-part-in-a-million difference between the matter and antimatter decay probabilities. The small size of this "direct" CP violation made its experimental discovery very difficult, requiring 36 years of intense experimental effort following the 1964 discovery of "indirect" CP violation.

This calculation required more than 200 million core processing hours on supercomputers and would have required two thousand years using a laptop.

While these two examples of matter-antimatter asymmetry are of very different size, they are related by a remarkable theory for which physicists Makoto Kobayashi and Toshihide Maskawa were awarded the 2008 Nobel Prize in physics. The theory provides an elegant and simple explanation of CP violation that manages to explain both the 1964 experiment and later CP-violation measurements in experiments at the KEK laboratory in Japan and the SLAC National Accelerator Laboratory in California.

"This new calculation provides another test of this theory—a test that the Standard Model passes, at least at the present level of accuracy," said Christoph Lehner, a Brookhaven Lab member of the team.

Although the Standard Model does successfully relate the matter-antimatter asymmetries seen in the 1964 and later experiments, this Standard-Model asymmetry is insufficient to explain the preponderance of matter over antimatter in the universe today.

"This suggests that a new mechanism must be responsible for the preponderance of matter of which we are made," said Christopher Kelly, a member of the team from the RIKEN BNL Research Center (RBRC). "This one-part-per-million, direct CP violation may be a good place to first see it. The approximate agreement between this new calculation and the 2000 experimental results suggests that we need to look harder, which is exactly what the team performing this calculation plans to do."

This calculation was carried out on the Blue Gene/Q supercomputers at the RIKEN BNL Research Center (RBRC), at Brookhaven National Laboratory, at the Argonne Leadership Class Computing Facility (ALCF) at Argonne National Laboratory, and at the DiRAC facility at the University of Edinburgh. The research was carried out by Ziyuan Bai, Norman Christ, Robert Mawhinney, and Daiqian Zhang of Columbia University; Thomas Blum of the University of Connecticut; Peter Boyle and Julien Frison of the University of Edinburgh; Nicolas Garron of Plymouth University; Chulwoo Jung, Christoph Lehner, and Amarjit Soni of Brookhaven Lab; Christopher Kelly, and Taku Izubuchi of the RBRC and Brookhaven Lab; and Christopher Sachrajda of the University of Southampton. The work was funded by the U.S. Department of Energy's Office of Science, by the RIKEN Laboratory of Japan, and the U.K. Science and Technology Facilities Council.  The ALCF is a DOE Office of Science User Facility.