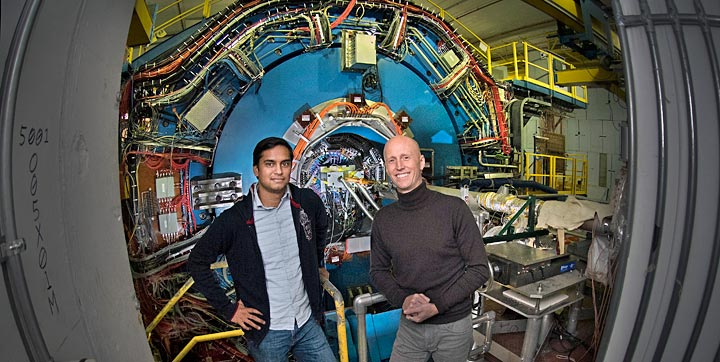 UPTON, NY—Peering into the seething soup of primordial matter created in particle collisions at the Relativistic Heavy Ion Collider (RHIC)—an "atom smasher" dedicated to nuclear physics research at the U.S. Department of Energy's Brookhaven National Laboratory—scientists have come to a new understanding of how particles are produced in these collisions. This understanding represents a paradigm shift consistent with the presence of a saturated state of gluons, super-dense fields of the glue-like particles that bind the building blocks of ordinary matter.

As described in a paper just published in Physical Review Letters, the discovery emerged as the scientists searched for a way to separate collision results by shape at RHIC, a DOE Office of Science User Facility.

This study shows that we can separate the data from differently shaped ion collisions, and along the way, we also found surprising and possibly even more interesting results.

"We want to compare differently shaped collision events to be able to tease out the influence of geometry on the patterns of particles we see streaming into our detector," said Brookhaven physicist Paul Sorensen, a member of RHIC's STAR detector collaboration. Those experiments would help scientists better understand fluctuations in the ions' internal composition and their influence on the characteristics of the matter created at RHIC—a soup of subatomic quarks and gluons known as quark-gluon plasma (QGP).

"This study shows that we can separate the data from differently shaped ion collisions," Sorensen said. "And along the way, we also found surprising and possibly even more interesting results regarding the role the particles' internal structure likely plays in creating the QGP."

RHIC was first set up to collide gold ions to create and study the quark-gluon plasma. Even the earliest results hinted that the shape of the collision zone matters.

For example, in collisions where the spherical gold ions pass through each other in an off-center way, overlapping like a Venn diagram, they create an oblong, football-shaped interaction region. In these collisions, the flow of particles emerging around the "equator" of the collision zone is enhanced relative to that at the "poles," especially when compared with more completely overlapping smashups. Scientists have been studying the detailed characteristics of this "elliptical flow" to better understand the properties of the quark-gluon plasma and the internal characteristics of the colliding ions.

But the off-center gold-gold collisions also cause the positively charged protons packed inside the colliding nuclei to swirl. And that swirling positive charge produces a very powerful magnetic field. To study the effects of the oblong interaction region without the magnetic field, scientists at RHIC turned to uranium.

Unlike gold ions, uranium ions have an oblong, football-like shape—similar to the overlap region in the off-center gold collisions. Comparing collisions where two "footballs" collide tip-to-tip, producing a spherical overlap, with those where the footballs collide upright, or body-to-body—in both cases with the ions completely overlapping—would give scientists a way to study the effect of shape without the swirl-induced magnetic field seen in the gold smashups. But the first question was whether the scientists could sort out results from the two differently oriented types of uranium collisions.

"There's no way to selectively orient the ions so they collide the way you want them to," Sorensen said. "You are stuck with what you get. The key is to be able to figure out which is which from the data."

Sorting out the shapes

The physicists set out to sort the results by analyzing how, and how many, particles emerge from the collisions. There should be more elliptical flow in upright body-body events than for the tip-tip collisions.  The tip-tip collisions should also, on average, produce more particles than the body-body ones, because as the oblong football shapes pass through one another tip to tip, there are more chances for the internal particles to undergo multiple collision events within the same nucleus. So they plotted the data from the whole range of uranium collisions on a graph to look for a downward trend in elliptical flow with increasing particle production.

They also plotted a similar set of measurements from gold-gold collisions, where the spherical shape and number of internal collisions doesn't change. For these data, used as a control, they expected the pattern of flow to remain steady even as the number of particles produced increased.

"This was a big success because we now have a way to 'manipulate' the geometry. We can pick out samples of uranium collision events with a desired orientation by selecting only those with low particle production (if we want body-body collisions) or high particle production (for tip-tip)," Sorensen said.

By selecting events with different orientations the scientists can now explore the effect of geometry on other research questions. For example, they can study whether the flow that persists in the oblong shape affects things like the separation of positive and negative charges to disentangle the effects of flow from those of the magnetic field. They can also compare the tendency of particles traveling through the short vs. long side of football-shaped events to get stuck, or "quenched," in the plasma.

Yet even with the success of being able to separate tip-tip from body-body collisions, one thing still didn't fit. The downward trend in flow with particle production measured by the STAR physicists wasn't as steep as the one predicted by the model they were using to analyze the data.

"This was really confusing, perplexing, and a bit demoralizing," Sorensen said. "But that's often an indication that you are about to learn something new and interesting. So it was both perplexing and exciting."

They turned to Prithwish Tribedy, a student at the Variable Energy Cyclotron Center in Kolkata, India, who had been working with Brookhaven's nuclear theory group and has since become a postdoctoral fellow for STAR. Tribedy had been performing calculations related to gluon saturation—another model of the initial state that scientists suggest emerges as gluons multiply and linger in ions accelerated close to the speed of light, as they are at RHIC. When Tribedy used those calculations to model the particle production that should be expected from the differently oriented uranium collisions, Sorensen said, "The calculations basically nailed the data."

It turns out that, to be successful, the model needs to account for the quark and gluon substructure of the protons and neutrons, Sorensen said.

"That's not surprising, but what is surprising is that the number of particles produced in the collisions doesn't seem to depend on how many times any given quark collides with another quark, just whether it had a collision or not. This dependence on collision or no collision, rather than the number of collisions, would be something like returning from a party without being able to remember whether you had met one person or a hundred people," Sorensen said.

"One of these is the gluon saturation model—which is why we think that model did a better job at predicting how well we'd be able to resolve the tip-tip vs. body-body collisions," Sorensen said.

"This result is just one piece of evidence. But it does support a new picture of how particles are born and that picture looks in many ways a lot like gluon saturation," Sorensen said. Future research will focus on further testing the idea of gluon saturation in comparison with other alternative explanations.

Research at RHIC is supported by the DOE Office of Science (NP) and these agencies and organizations.