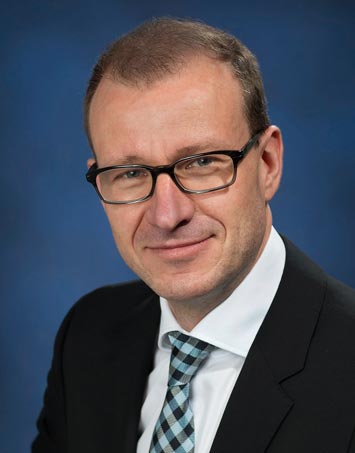 Konik succeeds Peter Johnson, who is stepping down after nearly eight years as CMPMS Chair, during which time he successfully guided the department to its current configuration. Johnson will now serve as the Deputy Chair of CMPMS and as the Director of Brookhaven Lab's Center for Emergent Superconductivity, a DOE Energy Frontier Research Center (EFRC). He will also serve as a senior management advisor to the Associate Laboratory Director (ALD) for Energy Science on strategy, and will continue as group leader for electron spectroscopy in CMPMS, where his distinguished research contributions have earned him a Buckley prize from the American Physical Society.

"I am grateful for Peter Johnson's distinguished service and his success in growing CMPMS and leading it to its current position as world leader in correlated electron physics," said Jim Misewich, Brookhaven Lab's ALD for Energy Science. "I also appreciate his continued leadership as director of the Center for Emergent Superconductivity and his advice on directorate strategy. "

Konik has been a member of CMPMS's condensed matter theory group since 2003, serving as Deputy Chair of the department for the past year. His research interests include low dimensional strongly correlated electron materials, low dimensional magnetism, and strongly correlated nanosystems both in and out of equilibrium.  He brings with him to his new position a broad theoretical and working knowledge of the department's vision and current activities.

"It's been a pleasure to work with Robert in all aspects of the job—from scientific collaboration, to his work as Deputy Chair over the last year, and in particular for his role in developing an updated strategic vision for CMPMS's future," said Misewich. "I look forward to working with Robert as he steps into the Department Chair role and helping him to realize the exciting scientific vision for CMPMS."

The Condensed Matter Physics & Materials Science Department has 60 employees and an annual budget of about $21 million. Scientists in the department study basic, theoretical, and applied aspects of materials, their uses, and their electronic, physical, mechanical, and chemical properties. Their aim is to integrate the knowledge and tools of chemistry and physics with the principles of engineering to understand and optimize material properties, and to create new and improved materials to help fulfill the missions of the Department of Energy.

Much of the research is focused on finding or improving materials that may be of use in meeting our nation's energy needs. For example, studies of the properties of superconductors—materials that conduct electricity with no resistance when cooled to a certain temperature—may lead to dramatically more efficient electric power transmission. One key challenge is to figure out how to nudge the operating temperature of superconductors to a range more practical for applications without the need for expensive coolants.

In addition, researchers are exploring new materials that convert sunlight to electricity; investigating strongly correlated materials, in which the interaction between electrons is stronger than in ordinary materials; and studying materials with unique properties determined by their nanoscale structure, where dimensions are measured in billionths of a meter.

"Taken altogether, our department has some incredibly exciting research being performed by an exceptionally talented group of scientists," said Konik. "As part of this effort, we are pleased to have Gabi Kotliar on board, heading up our new initiative in computational material design."

Led by Kotliar, scientists at the recently announced Center for Computational Design of Functional Strongly Correlated Materials and Theoretical Spectroscopy at Brookhaven Lab and Rutgers University will develop next-generation methods and software to accurately describe electronic properties in complex strongly correlated materials, as well as a companion database to predict targeted properties with energy-related application to thermoelectric materials.

Konik earned his Ph.D. in strongly correlated systems in 1998 from Cornell University. A Canadian citizen, he worked as a postdoctoral fellow funded by the Natural Sciences and Engineering Research Council of Canada in the department of physics at the Institute for Theoretical Physics, University of California, Santa Barbara from 1997 through 1999. He then joined the University of Virginia as a Research Associate, advancing to Research Scientist in 2001.

Konik joined Brookhaven Lab as a Research Scientist in 2003, with promotions to Assistant Physicist (2004), Associate Physicist (2006), and Physicist (2009). He served as Deputy Chair of CMPMS from January 2015. He has also been an adjunct professor at Boston College (since 2011), an associate editor at the journal Physical Review B (since 2008), is an Honorary Research Associate at the London Centre for Nanotechnology (2015-2019), and has held visiting appointments at Universiteit van Amsterdam in the Netherlands and Université de Cergy-Pontoise, Paris, France.