High-tech photography in the Amazon reveals that young leaves grow in at the same times as older ones perish, in strong contrast to temperate forests in North America or Europe, resulting in seasonal increases in photosynthesis that must be taken into account to build more accurate climate models. 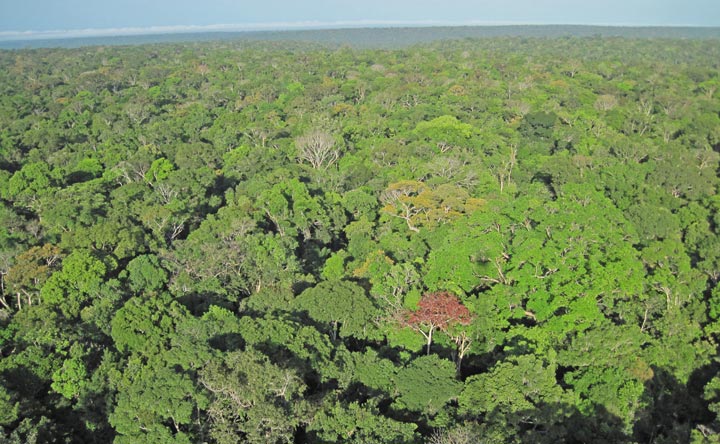 Pictures like this one, taken from special cameras installed on towers above the rainforest canopy, recorded the changes in hundreds of individual tree crowns over the seasons in three different forests across the central Amazon.

One hundred and fifty feet above the ground in the Amazonian rainforest, a vast ocean of green spreads out in every direction. The rainforest canopy is made up of mostly tropical evergreen trees, which take in enormous amounts of carbon from Earth's atmosphere. Understanding the carbon cycle in these forests – how carbon is stored in plants and soil and then returned to the atmosphere – is crucial to creating accurate models that predict how global climate will change in the future. Key to that puzzle is understanding photosynthesis in tropical forests.

"We want to understand whether photosynthesis in tropical evergreen forests is driven primarily by seasonal climate or by the internal dynamics of the rainforest," said Jin Wu, a post-doctoral research associate at the U.S. Department of Energy's (DOE) Brookhaven National Laboratory. Wu is the lead author on a study completed while he was a Ph.D. student with senior author Scott Saleska, Associate Professor of Ecology and Evolutionary Biology at the University of Arizona, published online in the February 26 issue of Science.

Wu, together with other members of Scott Saleska's lab and international collaborators from Brazil, Australia, and Japan found that new leaf growth is synchronized with old leaf loss in the dry-season of the Amazon rainforest. This shifts the makeup of the tree canopy towards younger leaves, which display higher photosynthetic capacity, and explains the large observed seasonal increases in photosynthesis throughout the ecosystem.

"Tropical rainforests are biologically really important, but our understanding is so limited because the available data is very limited," Wu said.

He is continuing his PhD research as a post-doc in a program designed to remedy the paucity of data from this region, the Next Generation Ecosystem Experiments – Tropics (NGEE-Tropics). This project is supported by the DOE Office of Science and led by Lawrence Berkeley National Laboratory's Earth Sciences Division with partner institutes including Brookhaven.

NGEE-Tropics is an ambitious 10-year project to dramatically reduce the uncertainty in climate models and increase scientific understanding of how tropical forest ecosystems will respond to climate and atmospheric change.

Wu was recently in Panama, getting up close and personal with the rainforest. Together with Brookhaven scientists Kim Ely, Shawn Serbin, and Alistair Rogers, he is studying the impact of the El Niño–Southern Oscillation (ENSO) on the response of photosynthesis to drought, and building relationships between important physiological properties that drive model uncertainty and other observations.

"If we want to advance our understanding about the terrestrial carbon cycle in tropical forests, we need to know what types of leaves are present at what times of year, and their physiological properties," he said. "We can improve our models with this data, and better understand what to look for in the future with remote sensing from tower-mounted cameras, aircraft, and satellites."

Climate models have long represented the tropics in an overly simplistic way, often due to the lack of data from these hard to reach regions. That view assumed that tropical forests have consistent canopy greenness throughout the year—unlike the dramatic seasonal changes in temperate forests, heralded by vibrant reds and yellows.

"At the landscape level, it always looks evergreen," Wu said. But broad-scale images—for example, those taken by satellites—often can't discern the ground level subtleties that have a large impact on the level of photosynthesis. "Evergreen doesn't mean there are no internal dynamics," Wu said.

Seeing the trees through the forest

To better examine the impact of these internal dynamics on photosynthesis, Wu and his colleagues used all available data from four sites in the Amazon with a wide range of tree species, rainfall gradients, and soil types: three spots near the equator along the Amazon River, and one water-limited site on the southern side of the Amazon.

At these sites, the researchers measured variables that allowed them to calculate the aggregated photosynthesis rate across the whole forest. They found that the derived photosynthetic capacity from these measurements is seasonal. That is, though the forest is evergreen, the internal photosynthetic machinery changes throughout the year.

To determine what caused these changes, they used tower-mounted cameras perched over the treetops to survey a plot about a third of a mile square, observing the changing quantities and qualities of leaves in the canopy crowns. They found that leaf area increased significantly during the dry season, but these increases precede photosynthetic capacity by at least 1 month, which is increased twice as much as would have been expected from the increase in leaf area alone.

To investigate the quality of the leaves, expert tree climbers accompanied the researchers as they trekked into the jungle, scaling the trees to tag individual leaves from the time they emerge and take photographs weekly and then monthly. This work revealed important changes in leaf biophysical and physiological properties through their lifecycles.

"Photosynthesis is like a metabolism," Wu said. "As human beings, our metabolic rates are strongly age-dependent. Leaves are similar. During their first two months, leaves expand and acquire more chlorophyll, becoming greener." But Wu and his team found that leaves don't reach their photosynthetic peak until they are fully expanded at two to five months old. At that point, they are more efficient in absorbing light and more efficient in converting light to food — that is, stored carbon. After six months, their photosynthetic rates decline as they enter 'old' age.

The effect of leaf age on physiology explained the surprisingly high seasonal changes in photosynthetic capacity.

Wu said that incorporating these details about tropical evergreen leaves into earth system models will allow for more accurate predictors of carbon exchange and, ultimately, their feedbacks to climate.

Wu's study of the Amazon was funded by the National Science Foundation, NASA Terra-Aqua Science, and the GoAmazon project, which is funded jointly by the U.S. Department of Energy and the Brazilian state science foundations in Sao Paolo state and Amazônas state. Wu was supported by a NASA Earth and Space Science fellowship.