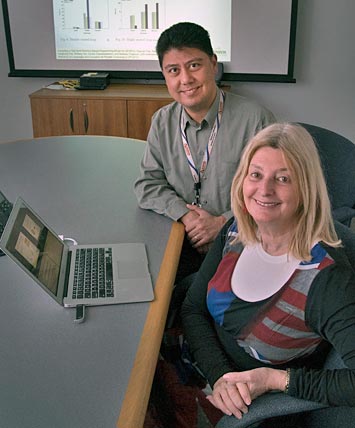 UPTON, NY— The U.S. Department of Energy's (DOE) Brookhaven National Laboratory has been named a 2016 GPU Research Center by NVIDIA, the world leader in visual computing.

GPU Research Centers are institutions that embrace and use graphics processing unit (GPU)-accelerated computing across multiple research fields, and are at the forefront of some of the world's most innovative scientific research. GPU-accelerated computing leverages the parallel processing capabilities of GPU accelerators and enabling software to deliver dramatic increases in performance for scientific, artificial intelligence, machine learning, graphics, engineering, and other demanding applications.

As a GPU Research Center, Brookhaven Lab will have pre-release access to NVIDIA GPU hardware and software, opportunities to attend exclusive events and to participate in training sessions, and support from a designated NVIDIA technical liaison.

"The center will enable Brookhaven Lab to collaborate with NVIDIA on the development of widely deployed codes that will benefit from more effective GPU use, and in the delivery of on-site GPU training to increase staff and guest researchers' proficiency," said Kerstin Kleese van Dam, director of CSI and chair of the Lab's Center for Data-Driven Discovery.

These codes will include streaming data–analysis codes for the near-real-time analysis of experimental results at the National Synchrotron Light Source II, the Center for Functional Nanomaterials, and the Lab's other DOE Office of Science User Facilities, and extreme-scale materials science codes, such as the QuantumESPRESSO open-source computer codes for electronic-structure calculations and materials modeling at the nanoscale. According to D'Imperio, efforts in this area are already underway.

"In the Computational Science Laboratory, we are actively converting a materials science code to run on GPU accelerators. Early results show a 31 percent increase in performance over the CPU [central processing unit]-only version," said D'Imperio.

"At Brookhaven Lab, we are exploring productive, portable approaches to developing application codes that will run on GPUs," said Chapman. "Brookhaven is ideally positioned to demonstrate the benefits of using compiler directives—or source code instructions for the compiler to influence its translation of a program—for GPU application development. Because we have experts who develop programming models and experts who can use those models to develop applications, we can take user feedback into account when experimenting with and evaluating our ideas."

Brookhaven's GPU training program will be expanded to include courses on GPU architecture and programming tools, such as the NVIDIA CUDA parallel computing platform and OpenACC (a parallel programming standard for compiler directives).

"Brookhaven Lab has built a cross-discipline computational initiative to address scientific big data problems," said Kimberly Powell, director of Higher Education at NVIDIA. "We are eager to work with them on application development and to bring the power of accelerated computing to material science, climate research, and other important research areas."