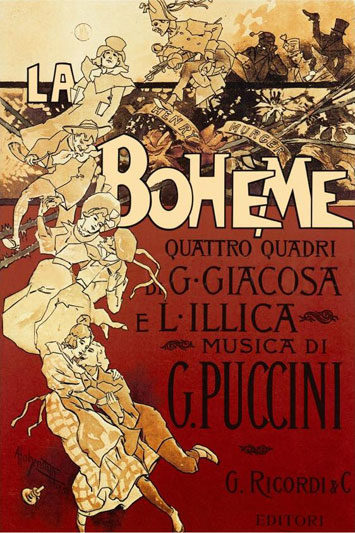 UPTON, NY — The Stony Brook Opera will present a preview of its upcoming production of Puccini's La Bohème at the U.S. Department of Energy's Brookhaven National Laboratory on Wednesday, April 27, at noon in Berkner Hall. Sponsored by Brookhaven Science Associates, the event is free and open to the public. All visitors to the Laboratory 16 and older must bring a photo I.D.

Based on a serialized novel, the plot centers on the lives of four Bohemians—the poet Rodolfo, the painter Marcello, the musician Schaunard, and the philosopher Colline, who live in a tiny garret in Paris. Life for them is a constant struggle to pay the rent, and provide for such basic necessities as food and heating. The drama focuses on the love of Rodolfo and his neighbor, the seamstress Mimì on the one hand, in contrast with the stormy relationship between Marcello and the flirtatious Musetta on the other. The extreme poverty in which they all live ultimately drives the women away from their men in order to find the support of wealthy lovers.  During the last Act, Mimì, suffering from tuberculosis, returns to Rodolfo and in a heart-rending final scene, she dies surrounded by all of her friends.

For the preview, under the musical direction of Timothy Long, the cast of Stony Brook Opera's production will perform scenes from all four Acts of the opera, finishing with the final scene that begins with Mimì's "Sono andati?" and continues through her death and Rodolfo's agonized cries on realizing this. These scenes will be performed semi-staged, with piano accompaniment, and the cast will sing in the original Italian, with projected titles in English.

Starring in the preview at Brookhaven and the complete performances at Stony Brook University are sopranos Jennifer Sung as Mimì, Rachel Schutz as Musetta, tenor David Guzman as Rodolfo, and baritones Joseph Han as Marcello, and David Davani as Schaunard. Bass-baritone Alexander Hahn performs the role of Colline, and baritone Zen Kuriyama the roles of Benoit in Act I and Alcindoro in Act II. All of these young singers are currently active in regional opera companies and participate in national and international vocal competitions.