This press release is based on a story written for the Cornell Chronicle by Bill Steele, Technology and Electronic Information Editor, ws21@cornell.edu, 607-255-7164.

UPTON, NY—Scientists at the U.S. Department of Energy's Brookhaven National Laboratory, Cornell University, and collaborators have produced the first direct evidence of a state of electronic matter first predicted by theorists in 1964. The discovery, described in a paper published online April 13, 2016, in Nature, may provide key insights into the workings of high-temperature superconductors. 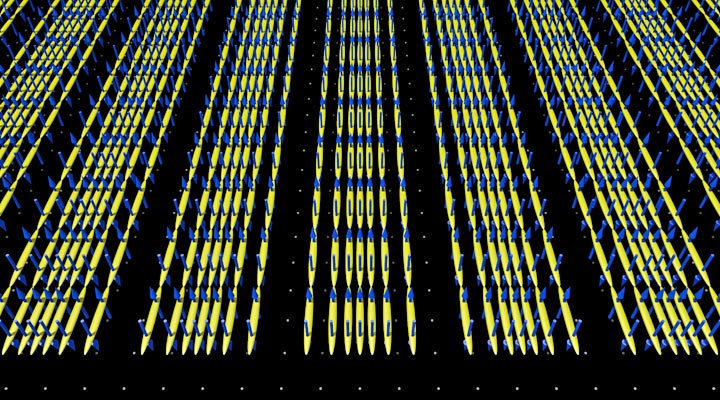 A schematic image representing a periodic variation in the density of Cooper pairs (pairs of blue arrows pointing in opposite directions) within a cuprate superconductor. Densely packed rows of Cooper pairs alternate with regions having lower pair density and no pairs at all. Such a "Cooper pair density wave" was predicted 50 years ago but was just discovered using a unique "scanning Josephson tunneling microscope.

The prediction was that "Cooper pairs" of electrons in a superconductor could exist in two possible states. They could form a "superfluid" where all the particles are in the same quantum state and all move as a single entity, carrying current with zero resistance — what we usually call a superconductor. Or the Cooper pairs could periodically vary in density across space, a so-called "Cooper pair density wave." For decades, this novel state has been elusive, possibly because no instrument capable of observing it existed.

Now a research team led by J.C. Séamus Davis, a physicist at Brookhaven Lab and the James Gilbert White Distinguished Professor in the Physical Sciences at Cornell, and Andrew P. Mackenzie, Director of the Max-Planck Institute CPMS in Dresden, Germany, has developed a new way to use a scanning tunneling microscope (STM) to image Cooper pairs directly.

The research team has developed a new way to use a scanning tunneling microscope (STM) to image Cooper pairs directly.

The studies were carried out by research associate Mohammed Hamidian (now at Harvard) and graduate student Stephen Edkins (St. Andrews University in Scotland), working as members of Davis' research group at Cornell and with Kazuhiro Fujita, a physicist in Brookhaven Lab's Condensed Matter Physics and Materials Science Department.

Superconductivity was first discovered in metals cooled almost to absolute zero (-273.15 degrees Celsius or -459.67 Fahrenheit). Recently developed materials called cuprates – copper oxides laced with other atoms – superconduct at temperatures as "high" as 148 degrees above absolute zero (-125 Celsius). In superconductors, electrons join in pairs that are magnetically neutral so they do not interact with atoms and can move without resistance.

Hamidian and Edkins studied a cuprate incorporating bismuth, strontium, and calcium (Bi2Sr2CaCu2O8) using an incredibly sensitive STM that scans a surface with sub-nanometer resolution, on a sample that is refrigerated to within a few thousandths of a degree above absolute zero.

Flow of current made of Cooper pairs between the sample and the tip reveals the density of Cooper pairs at any point, and it showed periodic variations across the sample, with a wavelength of four crystal unit cells. The team had found a Cooper pair density wave state in a high-temperature superconductor, confirming the 50-year-old prediction.

A collateral finding was that Cooper pairs were not seen in the vicinity of a few zinc atoms that had been introduced as impurities, making the overall map of Cooper pairs into "Swiss cheese."

The researchers noted that their technique could be used to search for Cooper-pair density waves in other cuprates as well as more recently discovered iron-based superconductors.

This work was supported by a grant to Davis from the EPiQS Program of the Gordon and Betty Moore Foundation and by the U.S. Department of Energy's Office of Science. The collaboration also included scientists in Scotland, Germany, Japan and Korea.