The following news release was published today by the Paul Scherrer Institute (PSI) and appears here in its original format. Valentina Bisogni, an assistant physicist at Brookhaven National Laboratory's National Synchrotron Light Source, a U.S. Department of Energy User Facility, performed resonant inelastic x-ray scattering (RIXS) measurements and data analysis for the work below while serving as a post-doc at PSI. In her current position at NSLS-II, she works at the Soft Inelastic X-ray Scattering (SIX) beamline to build a state-of-the-art RIXS spectrometer, designed to achieve 100'000 resolving power. The SIX beamline will be available for visiting scientists next year and will offer an extremely high energy resolution to characterize electronic and magnetic excitations in energy materials.

Highly sensitive X-ray scattering shows why an exotic material is sometimes a metal, sometimes an insulator 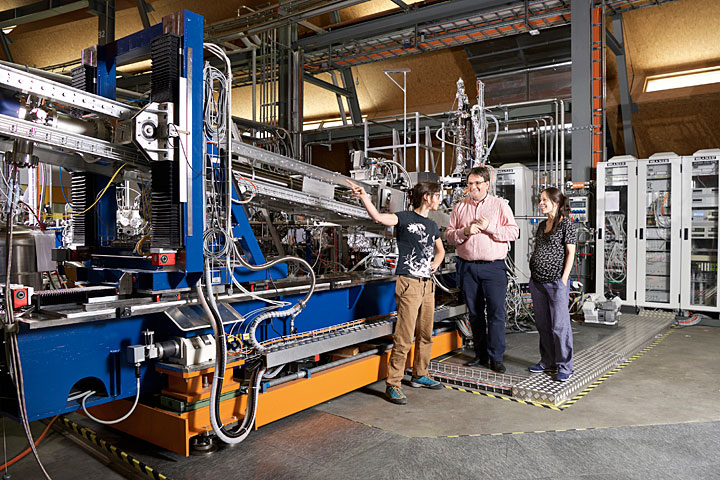 Some materials hold surprising – and possibly useful – properties: Neodymium nickel oxide is either a metal or an insulator, depending on its temperature. This characteristic makes the material a potential candidate for transistors in modern electronic devices. To understand how neodymium nickel oxide makes the transition from metal to insulator, researchers at the Paul Scherrer Institute PSI and the University of Geneva have precisely probed the distribution of electrons in the material. By means of a sophisticated development of X-ray scattering, they were able to show that electrons in the vicinity of the material's oxygen atoms are rearranging. The researchers have now published their study in the journal Nature Communications.

Computers, smartphones, and all kinds of other electronic devices have tiny transistors as their basic elements. Up to now, these have been realised with so-called semiconductors. It's possible that semiconductors might one day get competition from a certain class of oxide materials. Some of these materials can be switched between being an insulator and an electrically conductive metal. Thus they could also be used to build transistors.

To gain a fundamental understanding of the phase transition from metal to insulator in these materials, researchers at the Paul Scherrer Institute PSI and the University of Geneva, together with scientists at the University of British Columbia in Canada, looked at one representative of this class of materials: neodymium nickel oxide (NdNiO3). Above a temperature of around 150 Kelvin (minus 123 degrees Celsius), the material is a metal and thus conducts electric current. Below this temperature, in contrast, it is an insulator and therefore non-conducting.

The mystery of the phase transition

Since the arrangement of electrons in the material is responsible for these properties, the researchers wanted first to find out what was going on with this arrangement. Or, to put it in the scientists' language, which energetic states the electrons in the material take — that is, how the nickel and oxygen orbitals are occupied in this specific case. "For the material as a whole we call this its electronic structure," says Thorsten Schmitt of the PSI. In particular, the researchers wanted to find out how this electronic structure differs in its two states — metal and insulator.

Schmitt is leader of the research group Spectroscopy of Novel Materials at PSI. At the Swiss Light Source SLS, he and his team carry out Raman spectroscopy with X-rays. To measure the electronic structure of neodymium nickel oxide, they used the refined method of resonant inelastic X-ray scattering, or RIXS.

With RIXS, electrons in the system are resonantly excited. "That means the energy of the irradiating X-ray light is selected in such a way that it lifts electrons from one particular electron orbital into another," Schmitt explains. In this case, the researchers chose a specific electron transition in nickel. When, after excitation, the electrons in the system fall back along any number of different paths, they send out light at specific energies that correspond to energy intervals existing in the system. The electronic structure of the material can thus be measured through the recorded spectral lines.

To determine the irradiation energy for resonant excitation of the nickel transition, the researchers first acquired an absorption spectrum. This showed the resonance energy at around 853 electronvolts.

The next measurement, then, consisted of recording RIXS spectra for many different irradiation energies. For this the researchers took advantage of the possibility to vary the energy at the ADRESS beamline of the SLS. In this way, they recorded 80 spectra that lay below as well as above the resonance energy. When aligned, these spectra yielded a two-dimensional "carpet": a graphic that plots the RIXS spectra with reference to the energy of irradiation. 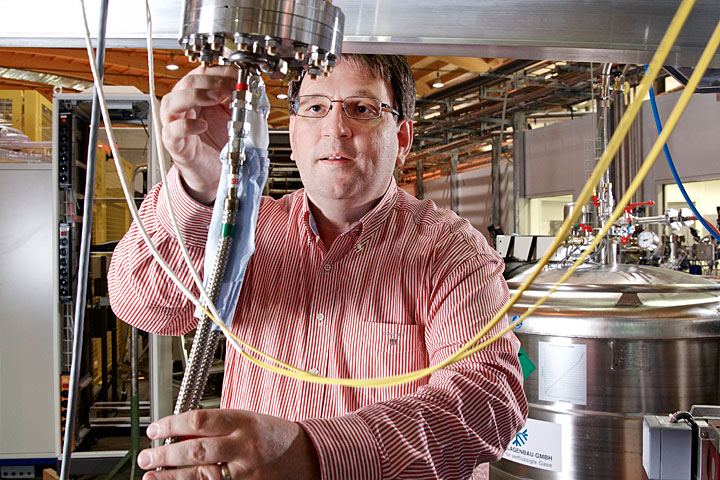 Thorsten Schmitt (PSI) setting the cooling for the high-resolution CCD detector installed on the SAXES spectrometer.

Electrons are rearranging in the vicinity of the oxygen atoms

The result: During the phase transition from metal to insulator, the electronic structure of the nickel atoms remains the same. Each nickel atom, however, is surrounded by six oxygen atoms, and in the metallic state these six atoms altogether are missing two electrons. In the insulating state, on the other hand, the six oxygen atoms alternately have their normal electronic structure or rather are missing twice as many — that is, four — electrons.

To make a long story short: The change takes place exclusively in the vicinity of the oxygen atoms.

Theoretical calculations, Schmitt explains, have for several years suggested that the changes might not take place in the region of the nickel atoms but rather in the vicinity of the oxygen atoms. "Now at the SLS," he says, "we have obtained definitive experimental proof."

With their experiment, the researchers have not only ascertained the cause of the metal-insulator transition in neodymium nickel oxide; at the same time, they have demonstrated how the RIXS technique can be used more broadly to understand the complex electronic structures of materials.

Thin-film fabrication at the University of Geneva

The sample of neodymium nickel oxide material with which the researchers carried out their measurements at the SLS was fabricated by collaborators at the University of Geneva. For RIXS measurements, it was essential to have the material available in single-crystal form. Up to now, however, this could be realised only as a thin film. The finesse of the Geneva researchers lay in manipulating the properties of the thin film in such a way — using a suitable substrate — that they matched those of a three-dimensional piece of the material.

The material's phase transition between metal and insulator could be realised not only through temperature, but also through the application of an electrical voltage, Schmitt stresses. This could be exploited if such materials should one day find their way into electronics.

At present, their research on this particular class of oxides is still considered basic research, says PSI scientist Schmitt. But this step is indispensable: "To be able to do good applied research, we have to do good fundamental research."

The Paul Scherrer Institute PSI develops, builds and operates large, complex research facilities and makes them available to the national and international research community. The institute's own key research priorities are in the fields of matter and materials, energy and environment and human health. PSI is committed to the training of future generations. Therefore about one quarter of our staff are post-docs, post-graduates or apprentices. Altogether PSI employs 2000 people, thus being the largest research institute in Switzerland. The annual budget amounts to approximately CHF 370 million. PSI is part of the ETH Domain, with the other members being the two Swiss Federal Institutes of Technology, ETH Zurich and EPFL Lausanne, as well as Eawag (Swiss Federal Institute of Aquatic Science and Technology), Empa (Swiss Federal Laboratories for Materials Science and Technology) and WSL (Swiss Federal Institute for Forest, Snow and Landscape Research).