Mathematician Moira Chas of Stony Brook University to Give Talk on Topology at Brookhaven Lab, 10/27 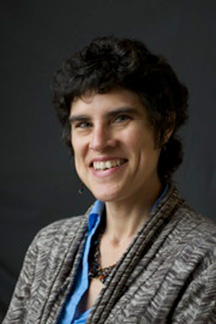 UPTON, NY —Moira Chas, an associate professor of mathematics at Stony Brook University will give a talk, "Picturing Physics: How Topology Helps Untangle the Puzzle of the Shapes of Things," at the U.S. Department of Energy's Brookhaven National Laboratory on Thursday, October 27, at 4:30 p.m. in the Hamilton Seminar Room. Sponsored by Brookhaven Science Associates, the event is free and open to the public. All visitors to the Laboratory 16 and older must bring a photo I.D.

Topologists are mathematicians with a strange sense of humor. An old joke goes, "A topologist is someone who cannot distinguish a mug from a bagel."

The goal of topology is to describe shapes and structures by their fundamental characteristics, like the number of holes. So, topologically speaking, a mug is the same as a bagel, since they both have one hole, but a pretzel is different because it has two. This fascinating and sometimes non-intuitive look at the world can help scientists map out the possible shapes materials and the atoms within them can take. This area of research was recognized in 2016 with the Nobel Prize for Physics, with a member of the Nobel Committee explaining the award using a bagel and pretzel as props.

Moira Chas, an associate professor of mathematics at Stony Brook University, studies low-dimensional topology – the mathematical study of the folding geometry of knots and braids. Chas says she tends to gravitate to mathematics that can be expressed by pictures, and in her work, she finds and probes mathematical conjectures using computers.

In her talk, Chas will discuss how topologists approach the questions of space and shape, and how they attempt to understand how shapes can fold in on themselves, shrink, expand, curve, or otherwise behave in ways you might not have considered possible.

Moira Chas was born in Argentina, in 1965. As a young woman, she discovered her passion for mathematics and writing. She is now an associate professor of mathematics at Stony Brook University.