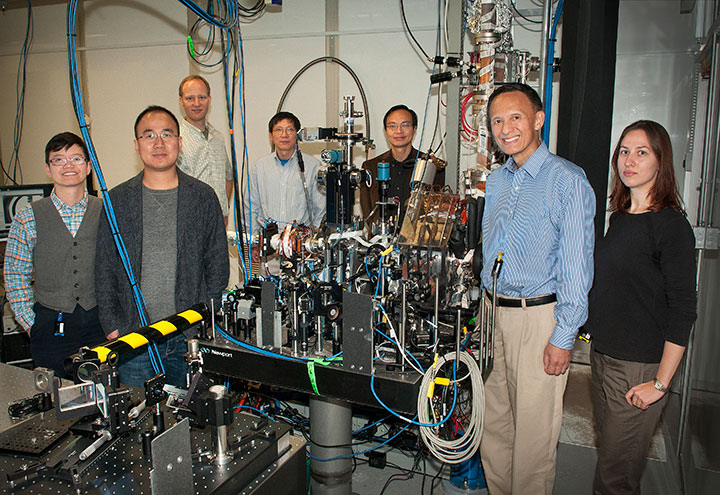 UPTON, NY—Many people picture electrical conductivity as the flow of charged particles (mainly electrons) without really thinking about the atomic structure of the material through which those charges are moving. But scientists who study "strongly correlated electron" materials such as high-temperature superconductors and those with strong responses to magnetism know that picture is far too simplistic. They know that the atoms play a crucial role in determining a material's properties.

For example, electrical resistance is a manifestation of electrons scattering off the atoms. Less evident is the concept that electrons and atoms can move cooperatively to stop the flow of charge—or, in the other extreme, make electrons flow freely without resistance.

Now, a team led by physicist Yimei Zhu at the U.S. Department of Energy's Brookhaven National Laboratory has produced definitive evidence that the movement of electrons has a direct effect on atomic arrangements, driving deformations in a material's 3D crystalline lattice in ways that can drastically alter the flow of current. Finding evidence for these strong electron-lattice interactions, known as polarons, emphasizes the need to quantify their impact on complex phenomena such as superconductivity (the ability of some materials to carry current with no energy loss) and other promising properties.

As described in a paper just published in the Nature partner journal npj Quantum Materials, the team developed an "ultrafast electron diffraction" system—a new laser-driven imaging technique and the first of its kind in the world—to capture the subtle atomic-scale lattice distortions. The method has widespread potential application for studying other dynamic processes. 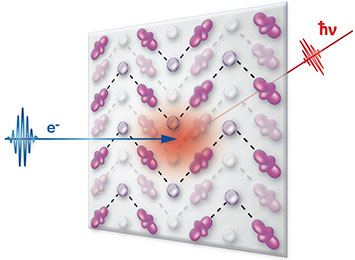 Imaging atomic-scale electron-lattice interactions: A laser pulse (red beam coming from right) gives electrons in a manganese oxide a "kick" of energy while a high-energy electron beam (blue) probes the atomic structure. Circle- and rod-shaped blobs represent spherical and elongated electron clouds on the manganese atoms. The oxygen atoms (not shown) form regular and elongated octahedra around the manganese atoms. Varying the time delay between the pulse and the probe reveals time-resolved subtle shifts in atomic arrangements as the lattice responds to the kicked-up electrons.

"The technique is similar to using stroboscopic photography to reveal the trajectory of a ball," said Zhu. "Using different time delays between throwing the ball and snapping the photo, you can capture the dynamic action," he said.

But to image dynamics at the atomic scale, you need a much faster flash and a way to set subatomic scale objects in motion.

The machine developed by the Brookhaven team uses a laser pulse to give electrons in a sample material a "kick" of energy. At the same time, a second laser split from the first generates very quick bursts of high-energy (2.8 mega-electron-volt) electrons to probe the sample. The electrons that make up these 130-femtosecond "flashes"—each lasting just 0. 00000000000013 seconds—scatter off the sample and create diffraction patterns that reveal the positions of the atoms. By varying the time delay between the pulse and the probe, the scientists can capture the subtle shifts in atomic arrangements as the lattice responds to the "kicked-up" electrons.

"This is similar to x-ray diffraction, but by using electrons we get a much larger signal, and the high energy of the probe electrons gives us better access to measuring the precise motion of atoms," Zhu said. Plus, his microscope can be built for a fraction of what it would cost to build an ultrafast x-ray light source. "This is a 'home-built' machine." 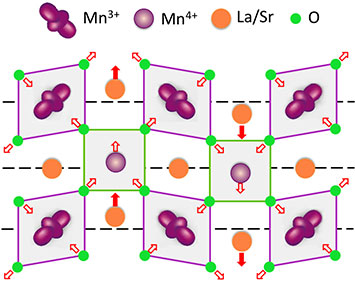 Key findings: This illustration shows how the arrangement of atoms in the crystal lattice (e.g., oxygen, shown in green) and the electron cloud shapes both shift to try to accommodate one another in a push-me, pull-you arrangement. This intermediate stage in response to the laser pulse energy kick is part of a two-step relaxation process that proves the existence of polarons.

The scientists used this technique to study the electron-lattice interactions in a manganese oxide, a material of long-standing interest because of how dramatically its conductivity can be affected by the presence of a magnetic field. They detected a telltale signature of electrons interacting with and altering the shape of the atomic lattice—namely, a two-step "relaxation" exhibited by the kicked-up electrons and their surrounding atoms.

In a normal one-step relaxation, electrons kicked up by a burst of energy from one atomic location to another quickly adapt their "shape" to the new environment.

"But in strongly correlated materials, the electrons are slowed down by interactions with other electrons and interactions with the lattice," said Weiguo Yin, another Brookhaven physicist working on the study. "It's like a traffic jam with lots of cars moving more slowly."

In effect the negatively charged electrons and positively charged atomic nuclei respond to one another in a way that causes each to try to accommodate the "shape" of the other. So an elongated electron cloud, when entering a symmetrical atomic space, begins to assume a more spherical shape, while at the same time, the atoms that make up the lattice, shift positions to try to accommodate the elongated electron cloud. In the second step, this in-between, push-me, pull-you arrangement gradually relaxes to what would be expected in a one-step relaxation.

"This two-step behavior, which we can see with our ultrafast electron diffraction, is the proof that the lattice vibrations are interacting with the electrons in a timely fashion. They are the proof that polarons exist," Yin said.

The finding yields insight into how the lattice response helps generate the huge decrease in electrical resistance the manganites experience in a magnetic field—an effect known as colossal magnetoresistance.

This work shows that an ultrafast laser can quickly modify electronic, magnetic, and lattice dynamics in strongly correlated electron materials—an approach that could result in promising new technical applications, such as ultrafast memory or other high-speed electronic devices.

"Our method can be used to better understand these dynamic interactions, and suggests that it will also be useful for studying other dynamic processes to discover hidden states and other exotic material behavior," said Zhu.

Other Brookhaven Lab scientists involved in the project include Junjie Li, Xijie Wang, Pengfei Zhu, Lijun Wu, Tatiana Konstantinova, Jing Tao, John Hill, and James Misewich, in collaboration with researchers from Rutgers University and Princeton University. Brookhaven's role in the work was funded by the DOE Office of Science and by Brookhaven's Laboratory Directed Research and Development program.