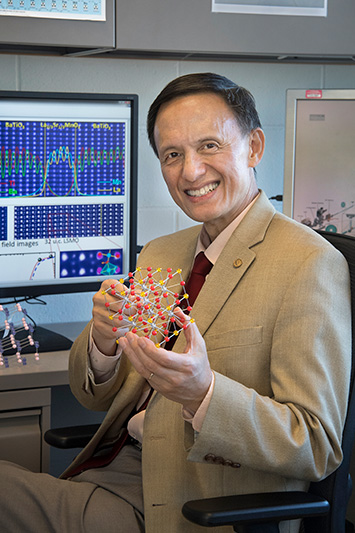 Brookhaven Lab's Yimei Zhu was elected a Fellow of the American Association for the Advancement of Science (AAAS) for his work to understand the structure and properties of functional materials through electron microscopy. The model he is holding is of the perovskite structure, which is a base structure of many materials that exhibit intriguing properties such as superconductivity, magnetoresistivity, and multiferroicity. On the screen is the experimentally observed atomic arrangement of such materials artificially designed in a multilayered form.

UPTON, NY—Yimei Zhu, a senior physicist and group leader at the U.S. Department of Energy's (DOE) Brookhaven National Laboratory, has been named a Fellow of the American Association for the Advancement of Science (AAAS). He is among the 391 AAAS members elevated this year to the rank of Fellow by their peers—a tradition that began in 1874 to recognize members for their scientifically or socially distinguished efforts to advance science or its applications.

As part of the Section on Engineering, Zhu was elected as an AAAS Fellow for his "distinguished contributions to the field of electron microscopy instrumentation and techniques to understand atomic and electronic structures and the physical behavior of functional materials."

"I am honored to be elected as an AAAS Fellow," said Zhu. "This honor recognizes the importance of electron microscopy and related instrumentation development. I hope my work will continue to make a difference in our understanding of the structure-property relationships of a wide range of energy materials and have a long-lasting impact on our society."

Zhu—who is also an adjunct professor in the Department of Applied Physics and Mathematics at Columbia University, and in the Department of Physics and Astronomy and the Department of Materials Science and Engineering at Stony Brook University—joined Brookhaven Lab nearly 30 years ago as an assistant scientist. Over the years, he rose through the ranks to senior scientist and later was appointed leader of the Electron Microscopy Facility at the Center for Functional Nanomaterials, a DOE Office of Science User Facility at Brookhaven, after serving as one of three principal investigators on the proposal for the nanocenter. Currently, he heads Brookhaven's Electron Microscopy and Nanostructure Group in the Condensed Matter Physics and Materials Science Department as well as the Institute for Advanced Electron Microscopy, which facilitates the electron microscopy activities going on across the Lab.

His research has focused on investigating the nanoscale structure and properties of strongly correlated electron systems (superconductors and other materials with strong interactions between electrons), multiferroic materials (those that combine electric and magnetic functionalities), and energy materials for thermoelectrics, photovoltaics, and other applications. To understand the nanoscale phenomena that control materials' functionality, Zhu uses Brookhaven's state-of-the-art electron microscopes, which can magnify an object more than 50 million times its original size. He also develops structural characterization instrumentation and techniques, which have included advanced atomic imaging, diffraction, and spectroscopy using high-energy and ultrafast electrons.

His electron microscopy work has led to major contributions in condensed matter physics, materials science, and chemistry. He has revealed the electronic structure and valence electron distribution in superconductors and functional oxides, visualized the spin configuration and precession orbit in nanomagnetic devices, and advanced the understanding of the relationship between structure and property in catalysts, batteries, and thermoelectric materials.

Zhu is the recipient of numerous awards, including the DOE's Chunky Bullet Award, Brookhaven Lab's Distinguished Science and Technology Award, an R&D 100 Award, and two Microscopy Today Innovation Awards. He is an inaugural fellow of the Microscopy Society of America and a fellow of the American Physical Society. Over the course of his career, he has extensively published and presented his work, with more than 450 articles in refereed journals and 250 invited talks at international conferences and workshops.

The new Fellows will be presented with their official certificates on February 18, 2016 at the AAAS Fellows Forum during the 2017 AAAS Annual Meeting in Boston.

The American Association for the Advancement of Science (AAAS) is the world's largest general scientific society and publisher of the journal Science as well as Science Translational Medicine, Science Signaling, a digital, open-access journal, Science Advances, Science Immunology, and Science Robotics. AAAS was founded in 1848 and includes nearly 250 affiliated societies and academies of science, serving 10 million individuals.