The following news release is being issued today by the Daya Bay Reactor Neutrino Experiment Collaboration, which is led by the United States and China. The U.S. Department of Energy's Brookhaven National Laboratory plays many roles in this international project. For more information about Brookhaven's role, contact Karen McNulty Walsh, kmcnulty@bnl.gov, 631 344-8350, or Peter Genzer, genzer@bnl.gov, 631-344-3174. 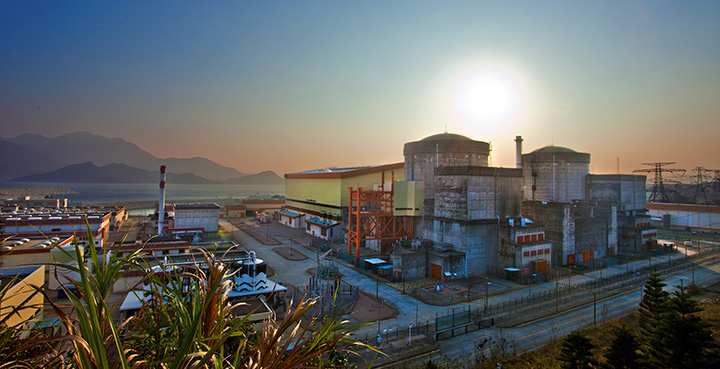 Results from a new scientific study may shed light on a mismatch between predictions and recent measurements of ghostly particles streaming from nuclear reactors—the so-called “reactor antineutrino anomaly,” which has puzzled physicists since 2011.

The anomaly refers to the fact that scientists tracking the production of antineutrinos—emitted as a byproduct of the nuclear reactions that generate electric power—have routinely detected fewer antineutrinos than they expected. One theory is that some neutrinos are morphing into an undetectable form known as “sterile” neutrinos.

But the latest results from the Daya Bay reactor neutrino experiment, located at a nuclear power complex in China, suggest a simpler explanation—a miscalculation in the predicted rate of antineutrino production for one particular component of nuclear reactor fuel.

"Since Daya Bay detects antineutrinos from multiple reactors where the fuel cycles typically don't overlap, we need lots of events and excellent understanding of the differences and uncertainties associated with the different fuel sources in order to assess all of our antineutrino measurements. The ability to tease out the differences by fuel type, as illustrated in this paper, is another great success of the precision neutrino physics program.”

— Brookhaven physicist Chao Zhang, a member of the Analysis Coordination Committee on the Daya Bay experiment

The new results from Daya Bay—where scientists have measured more than 2 million antineutrinos produced by six reactors during almost four years of operation—have led scientists to reconsider how the composition of the fuel changes over time and how many neutrinos come from each of the decay chains.

The scientists found that antineutrinos produced by nuclear reactions that result from the fission of uranium-235, a fissile isotope of uranium common in nuclear fuel, were inconsistent with predictions. A popular model for uranium-235 predicts about 8 percent more antineutrinos coming from decays of uranium-235 than what was actually measured.

In contrast, the number of antineutrinos from plutonium-239, the second most common fuel ingredient, was found to agree with predictions, although this measurement is less precise than that for uraninum-235.

If sterile neutrinos—theoretical particles that are a possible source of the universe’s vast unseen or “dark” matter—were the source of the anomaly, then the experimenters would observe an equal depletion in the number of antineutrinos for each of the fuel ingredients, but the experimental results disfavor this hypothesis.

The latest analysis suggests that a miscalculation of the rate of antineutrinos produced by the fission of uranium-235 over time, rather than the presence of sterile neutrinos, may be the explanation for the anomaly. These results can be confirmed by new experiments that will measure antineutrinos from reactors fueled almost entirely by uranium-235.

The work could help scientists at Daya Bay and similar experiments understand the fluctuating rates and energies of those antineutrinos produced by specific ingredients in the nuclear fission process throughout the nuclear fuel cycle. An improved understanding of the fuel evolution inside a nuclear reactor may also be helpful for other nuclear science applications.

Situated about 32 miles northeast of Hong Kong, the Daya Bay experiment uses an array of detectors to capture antineutrino signals from particle interactions occurring in a series of liquid tanks. The Daya Bay collaboration involves 243 researchers at 41 institutions in the U.S., China, Chile, Russia and the Czech Republic.

A complete list of funding agencies for the experiment can be found in the scientific paper.