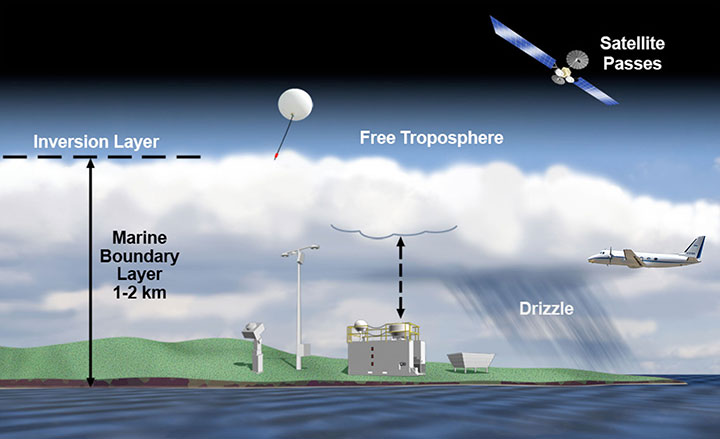 Using an aircraft outfitted with 55 atmospheric instrument systems, scientists will traverse horizontal tracks above and through clouds and spiral down through atmospheric layers to provide detailed, on-site measurements of aerosols and cloud properties. The data will supplement measurements made by ground-based radars and other instruments to provide a more complete understanding of how aerosol properties affect low marine boundary layer clouds, and help improve the representations of clouds and aerosols in models of Earth's climate.

UPTON, NY—For an intensive period throughout June and July, and again next January and February, scientists from U.S. Department of Energy (DOE) laboratories will take to the skies in a specially outfitted aircraft to gather data on the properties of aerosols and clouds above the Eastern North Atlantic. They’ll traverse horizontal tracks above and through clouds and spiral down through atmospheric layers to gather samples and measurements that add fine-scale detail to 3D cloud profiles constructed by nearby instruments on the ground. This synergistic sampling from throughout the clouds and below will improve scientists’ understanding of how aerosol properties affect low marine boundary layer clouds, and help improve the representations of clouds and aerosols in models of Earth’s climate.

“Low level clouds are abundant and can have a big influence on global climate by affecting how much solar energy is reflected back into space,” said Jian Wang, an atmospheric scientist at DOE’s Brookhaven National Laboratory and lead researcher on the study. “One of the biggest uncertainties in Earth system models is our understanding of how clouds respond to changes in the properties of aerosols, tiny particles wafted into the atmosphere as salty sea spray or emitted from distant industrial sources.”

A large fraction of the computer-choreographed flight tracks for the study will cross within the ranges of the ground-based scanning radars at DOE's Atmospheric Radiation Measurement (ARM) Climate Research Facility on Graciosa Island in the Azores (photo).

To improve that understanding, DOE’s Atmospheric Radiation Measurement (ARM) Climate Research Facility has conducted a variety of aerosol studies. They recently installed a fixed ground station with radars and other meteorological instruments on Graciosa Island in the Azores west of Portugal. This site operates 24/7 collecting data on aerosols, trace gases, atmospheric thermodynamics, and other factors that influence clouds and climate in the Eastern North Atlantic—an area influenced by a variety of aerosol sources where persistent low marine boundary layer clouds are highly susceptible to changes in aerosol particle properties.

The new study will supplement the year-round, ground-based dataset with a series of airborne sampling missions—approximately 20 in the summer and 20 in the winter—flown aboard ARM’s Gulfstream-159 (G-1) research aircraft. The G-1 is the centerpiece of the ARM Aerial Facility managed by DOE’s Pacific Northwest National Laboratory (PNNL). For this study it will be outfitted with 55 atmospheric instrument systems that will provide detailed “on-site” measures of the physical and chemical properties of aerosols and cloud particles, including variations in their distribution throughout the horizontal and vertical structure of the clouds. 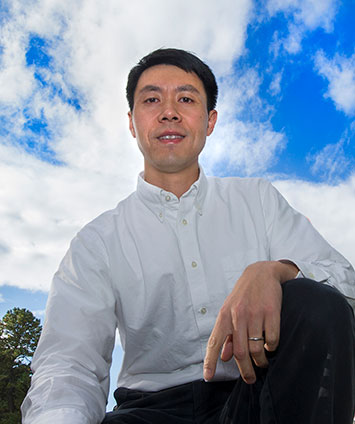 Brookhaven Lab atmospheric scientist Jian Wang is the principal investigator for the aerosol and cloud study campaign in the Eastern North Atlantic.

One instrument on board for the first time on a DOE aircraft will be a Holographic Detector for Clouds (HOLODEC), a wing-mounted device that takes detailed multidimensional pictures of cloud droplets to provide information about how they interact on microphysical scales. The data will help the scientists learn how the size distribution of cloud droplets is affected by the mixing of cloudy, wet air and drier, non-cloudy air.

On some flights, the scientists will also sample the free troposphere, high above the boundary layer clouds. Data collected there will help determine whether the observed aerosol particles are coming from local sources or being transported long distances.

The G-1 will take off from a joint U.S.-Portugal airbase 90 kilometers from Graciosa, with a large fraction of the computer-choreographed flight tracks crossing within the ranges of the ground-based scanning radars.  Flying within range of the radars will allow scientists to use the detailed microphysical information obtained from the aircraft flights to evaluate, validate, and improve how they interpret the ground-based data. 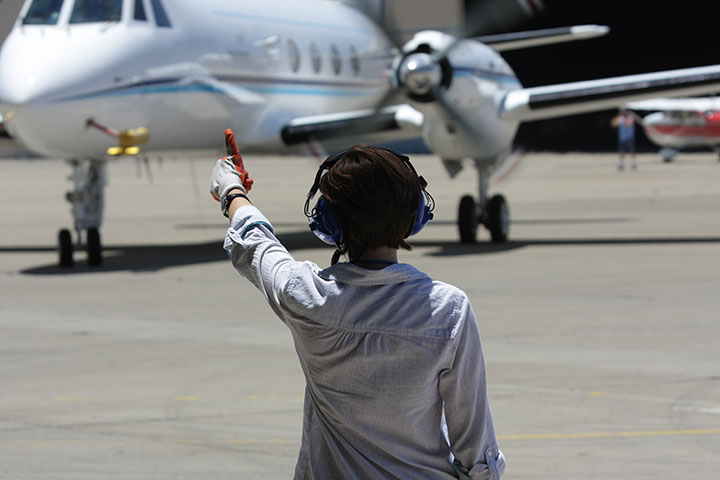 “Overall, the combination of ground-based and airborne data will give us a more complete picture of aerosols and clouds, particularly allowing us to better quantify the processes controlling the life cycles of aerosol and clouds, and how clouds respond to aerosol changes,” said Wang.

The ARM Climate Research Facility is a DOE Office of Science User Facility. The ARM Facility is operated by nine DOE national laboratories.