Findings open new pathway for "tuning" materials to ease or insulate against the flow of heat, sound, and other forms of energy 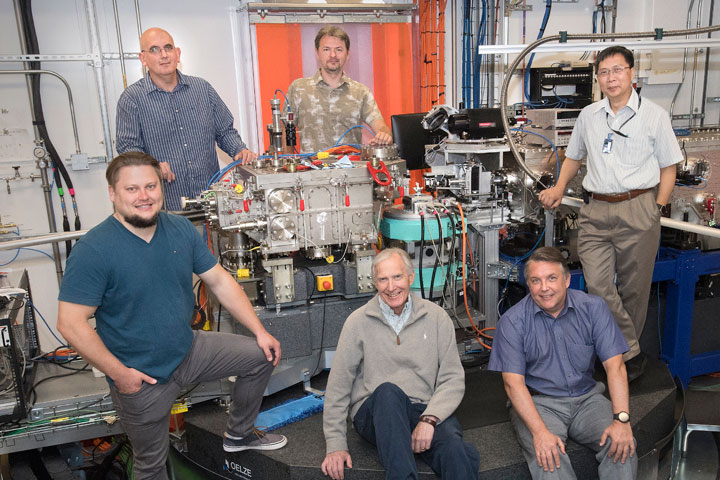 UPTON, NY—Scientists at the U.S. Department of Energy’s (DOE) Brookhaven National Laboratory have developed a new way to track dynamic molecular features in soft materials, including the high-frequency molecular vibrations that transmit waves of heat, sound, and other forms of energy. Controlling these vibrational waves in soft materials such as polymers or liquid crystal compounds could lead to a range of energy-inspired innovations—from thermal and acoustic insulators, to ways to convert waste heat into electricity, or light into mechanical motion.

In a paper just published in Nano Letters, the scientists describe using the newly constructed inelastic x-ray scattering (IXS) beamline at the National Synchrotron Light Source II (NSLS-II), which has unprecedented energy resolution, to monitor the propagation of vibrations through a liquid crystal compound in three different phases. Their findings show that the nanoscale structural changes that occur with increasing temperature—as the liquid crystals become less ordered—dramatically disrupt the flow of vibrational waves. Thus choosing or changing the “phase,” or arrangement of molecules, could control the vibrations and the flow of energy.

By tuning the structure, we can change the dynamic properties of this material.

“By tuning the structure, we can change the dynamic properties of this material,” said Brookhaven physicist Dima Bolmatov, the paper’s lead author.

The technique could also be used to study dynamic processes in other soft systems such as biological membranes or any kind of complex fluid.

“For example, we could look at how the lipid molecules in a cell membrane cooperate with each other to create tiny porous regions where even smaller molecules, like oxygen or carbon dioxide, can pass through—to see how gas exchange operates in gills and lungs,” Bolmatov said.

The ability to track such fast dynamic properties would not be possible without the unique capabilities of NSLS-II—a DOE Office of Science User Facility at Brookhaven Lab. NSLS-II produces extremely bright x-rays for studies in a wide range of scientific fields.

At the IXS beamline, scientists bombard samples with these x-rays and measure the energy they give up or gain with a precision to within two thousandths of an electron volt, as well as the angle at which they scatter off the sample—even at very small angles.

“The energy exchange tells us how much energy it took to make some molecules vibrate in a wave-like motion. The scattering angle probes the vibrations propagating over different length scales inside the sample—from nearly a single molecule to tens of nanometers. The new IXS beamline at NSLS-II can resolve those length scales with unprecedented precision,” said Yong Cai, the lead scientist of the IXS beamline.

“These two parameters—the scattering angle and the energy—have never before been so well measured in soft materials. So the technical properties of this beamline enable us to precisely locate the vibrations and track their propagation in different directions over different length scales—even in materials that lack a well-ordered solid structure,” he added. 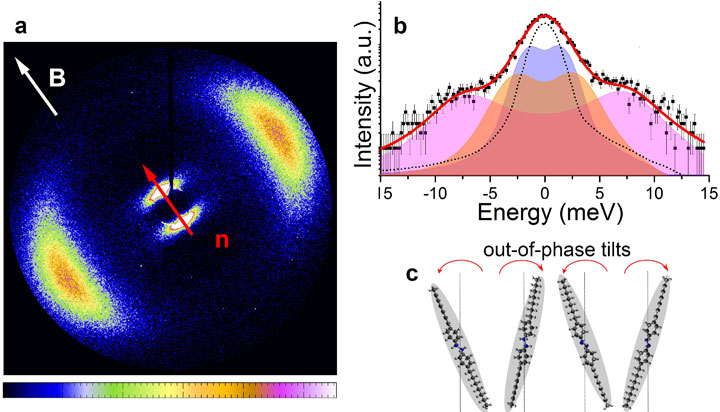 The colorful scattering pattern at left reveals molecular level structural information about the layered smectic phase of a liquid crystal material. The inner arcs indicate that the molecules are arrayed in ordered layers with regular spacing, while the outer arcs indicate there is still liquid-like mobility within the layers. The graph (top, right) represents inelastic x-ray scattering measurements from this smectic phase. Each peak (pink, orange, purple) represents a unique vibrational motion moving through the material, where the two "bumps" that make up each peak represent the energy gained or lost by the vibration. The purple and orange vibrations match the frequency of sound waves while the third, pink, vibration is linked to the tilt of the molecules (bottom, right). The out-of-phase rocking back-and-forth of these molecules matches the frequency of infrared light (heat).

In the liquid crystal study, the Brookhaven Lab scientists and their collaborators at Kent State University and the University at Albany made measurements at three different temperatures as the material went from an ordered, crystalline phase through transitions to a less-ordered “smectic” state, and finally an “isotropic” liquid. They easily detected the propagation of vibrational waves through the most ordered phase, and showed that the emergence of disorder “killed” the propagation of low energy “acoustic shear” vibrations. Acoustic shear vibrations are associated with a compression of the molecules in a direction perpendicular to the direction of propagation.

“Knowing where the dynamic boundary is—between the material behaving like an ordered solid and a disordered soft material—gives us a way to control the transmission of energy at the nanoscale,” Bolmatov said.

In the “smectic” phase, the scientists also observed a vibration that was associated instead with molecular tilt. This type of vibration can interact with light and absorb it because the terahertz frequency of the vibrations matches the frequency of infrared light or heat waves. So changing the material properties can control the way these forms of energy move through the material. Those changes can be achieved by changing the temperature of the material, as was done in this experiment, but also by applying external electric or magnetic fields, Bolmatov said.

This paves the way for new so-called phononic or optomechanical applications, where sound or light is coupled with the mechanical vibrations. Such coupling makes it possible to control a material by applying external light and sound or vice versa.

“We’re all familiar with applications using the optical properties of liquid crystals in display screens,” Bolmatov said. “We’ve found new properties that can be controlled or manipulated for new kinds of applications.”

The team will continue studies of soft materials at IXS, including planned experiments with block copolymers, nanoparticle assemblies, lipid membranes, and other liquid crystals over the summer.

“The IXS beamline is also now opened to external users—including scientists interested in these and other soft materials and biological processes,” said Cai.