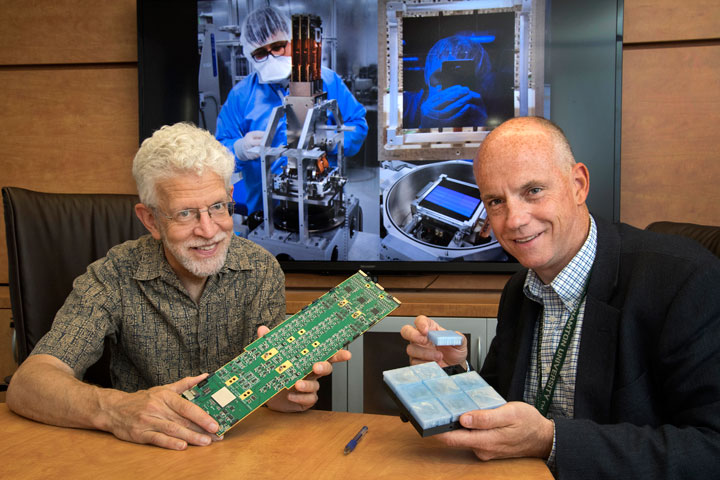 Scientists at the U.S. Department of Energy’s (DOE) Brookhaven National Laboratory have completed the first “science raft” for the Large Synoptic Survey Telescope (LSST), a massive telescope designed to capture images of the universe like never before. The raft is part of the sensor array that will make up the crucial camera segment of the telescope, and its completion is the first major milestone for Brookhaven’s role in the project.

The LSST project is a collaborative effort among more than 30 institutions from around the globe, funded primarily by DOE’s Office of Science and the National Science Foundation. SLAC National Accelerator Lab is leading the overall DOE effort, and Brookhaven is leading the conceptualization, design, construction, and qualification of the digital sensory array, the “digital film” for LSST’s camera.

Now under construction on a mountaintop in Chile, LSST will capture an image of the entire sky in the southern hemisphere every three nights, allowing researchers to create a time-lapse movie of the universe. Its camera will have an unparalleled field of view and, coupled with the light gathering power of the telescope, LSST will have a far greater capacity to survey the sky than has ever been previously available.

The 3,200 megapixel sensor array being developed at Brookhaven is what will enable LSST to capture this extraordinary view when it begins operations in 2023.

“It’s the heart of the camera,” said Bill Wahl, Science Raft Subsystem Manager of the LSST project at Brookhaven Lab. “What we’re doing here at Brookhaven represents years of great work by many talented scientists and engineers, which will lead to a collection of images that has never been seen before by anyone.  It’s an exciting time for the project and especially for the Lab.”

LSST’s scientists have designed a grid composed of more than 200 sensors, divided into 21 modules called science rafts. Each raft can function as a camera on its own but, when combined, they will stitch together a complete image of the visible sky. After years of design and construction, the first raft was qualified for use in the LSST camera in late May 2017. Brookhaven is now scheduled to construct approximately one raft per month.

Brookhaven began its LSST research and development program in 2003, with construction starting in 2014. In the time leading up to this milestone, an entire production facility, along with production and tracking software, needed to be created. During the past three years, Brookhaven and its vendors have been tackling the painstaking task of constructing these incredibly precise imaging arrays.

The science raft “is an object that is tricky enough to build alone, but it also has to operate perfectly when in a vacuum and cooled to -100° Celsius,” O’Connor said. Cooling the rafts improves the camera’s sensitivity; however, it also causes parts to contract, making it increasingly complicated to design the rafts precisely.

Ultimately, even with these challenges, the first raft was completed on time and the full digital sensor array is on track to be delivered to Chile by the end of 2019.

Once operational in the Andes Mountains, LSST will serve nearly every subset of the astrophysics community. It is estimated that LSST will find tens of millions of asteroids in our solar system, in addition to offering new information about the creation of our galaxy.

The main interest of the DOE in supporting the development of the LSST camera, however, is to investigate dark energy and dark matter – two anomalies that have baffled astrophysicists for decades.

“This is what a lot of people would say is the most pressing question of fundamental physics,” O’Connor said. “The nature of dark energy and dark matter don’t fit into the rest of physics.”

Scientists intend to use LSST to infer the spatial distribution of dark matter by looking at the way its gravitational force bends light from luminous matter (matter in the universe that emits light).

Images captured by LSST will also be made available to the public through a full-sky viewer similar to the Google Earth platform. This technology will give students and independent scientists the opportunity to investigate dark energy and dark matter, as well as for an average person to see and explore the stars.