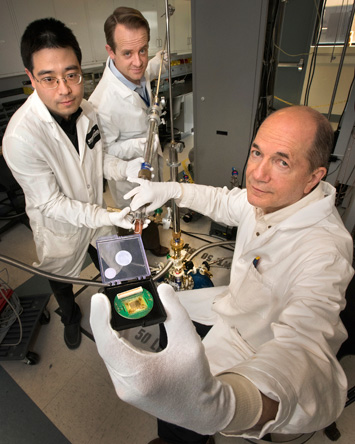 enlarge
Physicists at the U.S. Department of Energy’s Brookhaven National Laboratory have broken new ground in the study of functional oxide materials. The researchers discovered a previously unknown mechanism involved in “electrolyte gating,” a method for increasing electrical conductivity in materials and potentially inducing superconductivity. Their work was published on Monday, July 3 in Quantum Materials, a Nature partner journal.

Superconductivity is the ability of a material to conduct electricity with zero loss or resistance. This effect is 100 percent efficient but has only been achieved at extremely cold temperatures, making it impractical for most large-scale applications. In Brookhaven’s Oxide Molecular Beam Epitaxy Group, led by Ivan Bozovic, researchers have been investigating oxides – chemical compounds with oxygen atoms – as potential high-temperature superconductors.

Seeking to induce superconductivity in tungsten oxide, the researchers used a method called electrolyte gating. In this technique, electrically charged compounds draw ions with opposite charges away from each other, creating large electric fields and increasing a material’s electrical conductivity.

Similar effects have traditionally been produced using a technique called chemical doping, which requires scientists to add new atoms to materials. Though productive, chemical doping is inefficient for finding new materials with interesting and useful properties because the conductivity of “doped” materials is fixed and cannot be easily changed if researchers want to test a material under different conditions.

On the other hand, “Electrolyte gating allows you to tune materials,” said Tony Bollinger, a physicist at Brookhaven and one of the paper’s authors. “You can have one sample that you grow and then can continuously change—or tune—as you test it. It saves you from having to go back and synthesize new materials.”

Until now, the underlying mechanisms of electrolyte gating were not fully understood. There were two competing theories, one focused on an electrostatic effect, another focused on an oxygen-related (electrochemical) effect. The team at Brookhaven, however, discovered an entirely new mechanism at play, where hydrogen plays a key role.

By using a new method for patterning materials, the researchers were able to monitor the electrical resistance in sections near the site of electrolyte gating, not just in the immediate area. In this area, they observed a drop in resistance and a migration of positive charge. Based on the distance the charge moved, they were able to determine hydrogen atoms were moving through tungsten oxide.

“This means there is no universal mechanism for electrolyte gating,” Bollinger said. “It’s not always purely electrostatic or electrochemical. You have to look at your specific material and see what is going on there. Our findings give us a guide as we move forward and apply electrolyte gating to other materials.”

Brookhaven’s researchers also developed other new techniques to confirm their observations in this study. For example, they grew materials with different layers of thickness in order to measure electrical resistance in progressively thicker portions of the material, finding electrolyte gating was affecting the whole material, not just the surface.

“These techniques will increase the number of ways we can probe materials to see exactly what the influence of electrolyte gating is on them,” Bollinger said.

Moving forward, the researchers say electrolyte gating can be used as a more efficient alternative to chemical doping and could speed up the process of discovering new superconducting materials.

This work was supported in part by the Center for Emergent Superconductivity, an Energy Frontier Research Center funded by DOE’s Office of Science.