Explore more about the history of Brookhaven Lab and Camp Upton on the Lab's milestone anniversary website.

UPTON, NY — The U.S. Department of Energy's Brookhaven National Laboratory will host two public events to mark milestone anniversaries on Tuesday, Aug. 1. The U.S. Post Office's Upton branch—located on site at Brookhaven Lab—will issue a commemorative postmark from 11 a.m. to 1:30 p.m. and the Lab's Natural & Cultural Resources Manager Tim Green will present a talk, titled "History of the Federal Site in the Heart of Long Island: 1700s to Today," from noon to 1 p.m. that day, both in Berkner Hall.

These events are part of celebrations honoring two anniversaries occurring in 2017: 70 years since Brookhaven Lab's founding in 1947 and a century since the 1917 founding of Camp Upton, the former U.S. Army base where the Lab operates today.

In addition, the 70th anniversary for the first day of operations at the Post Office's Upton branch is Aug. 1, the day of these events.

These events are free and open to the public. All visitors to the Laboratory 16 and older must bring a photo I.D. 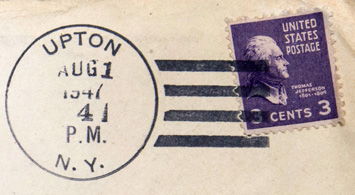 A postmark from Aug. 1, 1947—the year Brookhaven Lab's history of discovery began and the first day of operations at the Post Office's Upton branch on site. The Post Office at Upton will issue a special postmark to commemorate 70 years of discovery and a century of service on Tuesday, Aug. 1, as attendees are also welcomed to a talk on the history of the site in Berkner Hall.

Attendees can obtain a commemorative pictorial postmark, designed specifically for Brookhaven Lab and Camp Upton's anniversaries, at a "temporary post office station" in Berkner from 11 a.m. to 1:30 p.m. Bring an addressed or unaddressed envelope, post card, or other item with sufficient First-Class Mail postage. A mail clerk will apply the postmark and return it to the customer.

Post cards specially designed for this day as well as science and science-fiction-themed stamps—featuring the solar system, planet Pluto, and Star Trek—will be available for purchase.

Those who cannot attend on Aug. 1 can still receive the commemorative postmark by mailing self-addressed, stamped envelopes and post cards to the Upton Post Office at 2 Center Street, Upton, NY, 11973. Please note "Attn: Postmaster." These mail-in requests must be postmarked no later than Wednesday, Aug. 30.

During his talk at noon in Berkner Hall, Brookhaven Lab's Natural and Cultural Resources Manager Tim Green will discuss the history of the Brookhaven Lab site, located just north of the Long Island Expressway at Exit 68. Starting in the mid-1700s and continuing to the present, Green will describe the roadways that linked the Manor of St. George to the community of Ridge as well as the site's uses for the cordwood industry, World War I, the Civilian Conservation Corps, World War II, and Brookhaven National Laboratory.

Explore more about the history of Brookhaven Lab and Camp Upton on the Lab's milestone anniversary website.

Directions to Brookhaven Lab and from the Lab's main gate to Berkner Hall are available online.