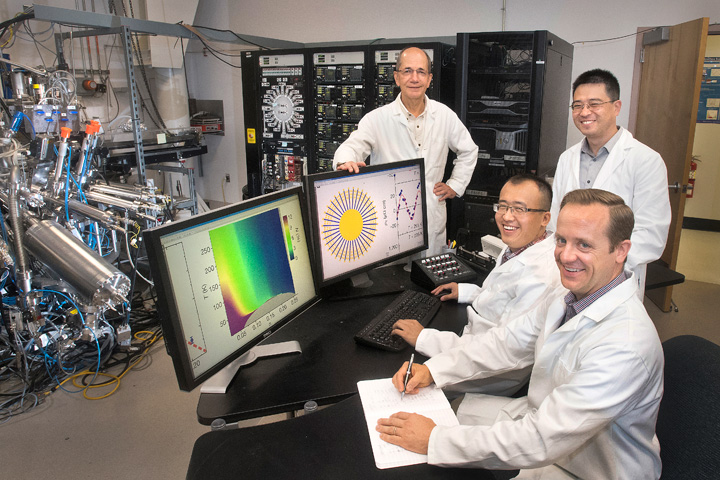 UPTON, NY — The perfect performance of superconductors could revolutionize everything from grid-scale power infrastructure to consumer electronics, if only they could be coerced into operating above frigid temperatures. Even so-called high-temperature superconductors (HTS) must be chilled to hundreds of degrees Fahrenheit below zero.

Now, scientists from the U.S. Department of Energy’s (DOE) Brookhaven National Laboratory and Yale University have discovered new, surprising behavior by electrons in a HTS material. The results, published July 27 in the journal Nature, describe the symmetry-breaking flow of electrons through copper-oxide (cuprate) superconductors. The behavior may be linked to the ever-elusive mechanism behind HTS.

“Our discovery challenges a cornerstone of condensed matter physics,” said lead author and Brookhaven Lab physicist Jie Wu. “These electrons seem to spontaneously ‘choose’ their own paths through the material — a phenomenon in direct opposition to expectations.”

In simple metals, electrons move evenly and without directional preference — think of a liquid spreading out on a surface. The HTS materials in this study are layered with four-fold rotational symmetry of the crystal structure. Electric current is expected to flow uniformly parallel to these layers — but this is not what the Brookhaven group observed.

“I’m from the Midwest, where miles of farmland separate the cities,” said Brookhaven physicist and study coauthor Anthony Bollinger. “The country roads between the cities are largely laid out like a grid going north-to-south and east-to-west. You expect cars to follow the grid, which is tailor-made for them. This symmetry breaking is as if everyone decided to leave the paved roads and drive straight across farmers’ fields.”

In another twist, the symmetry-breaking voltage persisted up to room temperature and across the whole range of chemical compositions the scientists examined.

“The electrons somehow coordinate their movement through the material, even after the superconductivity fails,” said Wu.

Strong electron-electron interactions may help explain the preferential direction of current flow. In turn, these intrinsic electronic quirks may share a relationship with HTS phenomena and offer a hint to decoding its unknown mechanism.

“The most difficult part of the whole work — and what helps set us apart — was the meticulous material synthesis,” said study coauthor Xi He.

This work was a part of a larger project that took 12 years and encompassed the synthesis and study of more than 2,000 films of lanthanum-strontium-copper-oxide superconductors.

“This scale of research is well-suited to a national laboratory environment,” said Ivan Bozovic, who leads the Brookhaven group behind the effort.

They use a technique called molecular beam epitaxy (MBE) to assemble complex oxides one atomic layer at a time. To ensure structural perfection, the scientists characterize the materials in real time with electron diffraction, where an electron beam strikes the sample and sensitive detectors measure precisely how it scatters.

“The material itself is our foundation, and it must be as flawless as possible to guarantee that the observed properties are intrinsic,” Bozovic said. “Moreover, by virtue of our ‘digital’ synthesis, we engineer the films at the atomic-layer level, and optimize them for different studies.”

Swimming against the current

The first major result of this comprehensive study by the MBE group at Brookhaven was published in Nature last year. It demonstrated that the superconducting state in copper-oxide materials is quite unusual, challenging the standard understanding.

That finding suggested that the so-called “normal” metallic state, which forms above the critical temperature threshold at which superconductivity breaks down, might also be extraordinary. Looking carefully, the scientists observed that as external current flowed through the samples, a spontaneous voltage unexpectedly emerged perpendicular to that current.

“We first observed this bizarre voltage over a decade ago, but we and others discounted that as some kind of error,” Bollinger said. “But then it showed up again, and again, and again — under increasingly controlled conditions — and we ran out of ways to explain it away. When we finally dove in, the results exceeded our expectations.”

To pin down the origin of the phenomenon, the scientists fabricated and measured thousands of devices patterned out of the HTS films. They studied how this spontaneous voltage depends on the current direction, temperature, and the chemical composition (the level of doping by strontium, which controls the electron density). They also varied the type and the crystal structure of the substrates on which the HTS films are grown, and even how the substrates are polished.

These meticulous studies showed beyond doubt that the effect is intrinsic to the HTS material itself, and that its origin is purely electronic.

At the molecular level, common liquids look the same in every direction. Some, however, are comprised of rod-like molecules, which tend to align in one preferred direction. Such materials are called liquid crystals — they polarize light and are widely used in displays. While electrons in common metals behave as a liquid, in cuprates they behave as an electronic liquid crystal.

“We need to understand how this electron behavior fits into the HTS puzzle as a whole,” He said. “This study gives us new ideas to pursue and ways to tackle what may be the biggest mystery in condensed matter physics. I’m excited to see where this research takes us.”

Authors Bozovic and He share affiliation with Brookhaven Lab and Yale University.

The research was funded by DOE’s Office of Science.