Supercomputer simulations of neutrons' inner turmoil and a new method that filters out "noise" yield the highest-ever precision calculation of nucleon axial coupling, a property crucial to predicting neutron lifetime 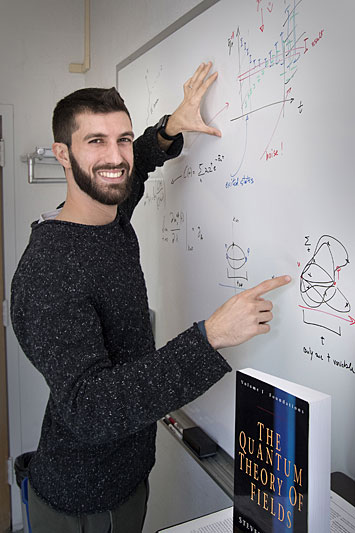 Enrico Rinaldi, a special postdoctoral researcher at the RIKEN BNL Research Center at Brookhaven National Laboratory, was involved in developing simulations essential to the new calculation of a property that helps determine a neutron's lifetime.

UPTON, NY—Using some of the world’s most powerful supercomputers, an international team including scientists from several U.S. Department of Energy (DOE) national laboratories has released the highest-precision calculation of a fundamental property of protons and neutrons known as nucleon axial coupling. This quantity determines the strength of the interaction that triggers neutrons to decay into protons—and can therefore be used to more accurately predict how long neutrons are expected to “live.” The results appear in Nature.

“The fact that neutrons decay into protons is a very, very important fact in the universe,” said Enrico Rinaldi, a special postdoctoral researcher at the RIKEN BNL Research Center at DOE’s Brookhaven National Laboratory, who was involved in developing simulations essential to the new calculation. “It basically tells you how atomic nuclei—made of protons and neutrons—were created after the Big Bang.”

Neutron lifetime also has bearing on the relative abundance of atoms like hydrogen and helium in the universe today, and how that balance will affect the formation of future stars.

The fact that neutrons decay into protons is a very, very important fact in the universe. It basically tells you how atomic nuclei were created after the Big Bang.

The new calculation could also help scientists determine which of two approaches to experimentally measure neutron lifetime is more accurate—and whether the several-second discrepancy between the two could potentially point to the existence of yet-to-be discovered particles.

“This was an intense two-and-a-half-year project that only came together because of the great team of people working on it,” Walker-Loud said. 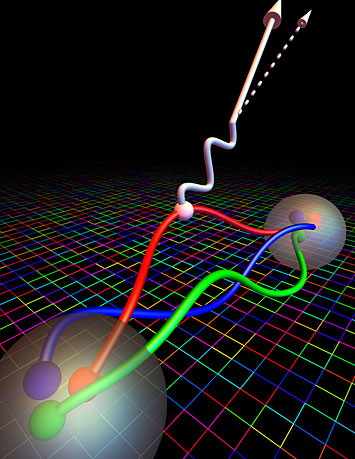 In this illustration, the grid in the background represents the computational lattice that theoretical physicists used to calculate a particle property known as nucleon axial coupling. This property determines how a W boson (white wavy line) interacts with one of the quarks in a neutron (large transparent sphere in foreground), emitting an electron (large arrow) and antineutrino (dotted arrow) in a process called beta decay. This process transforms the neutron into a proton (distant transparent sphere). Credit: Evan Berkowitz/ Jülich Research Center, Lawrence Livermore National Laboratory

When you think of the atoms that make up the stuff of our world today, you probably think of neutrons as relatively stable. A wooden desk, made of lots of carbon atoms, for example, doesn’t appear to decay in any appreciable way.

But if you pulled an isolated neutron out of one of those carbon atoms, it would transform into a proton, on average, in less than 15 minutes.

The process that makes this happen is a quantum mechanical interaction between external particles called W bosons with the inner building blocks of the neutron, known as quarks and gluons. This interaction changes the identity of one of the constituent quarks and therefore the overall identity of the particle.

But that’s an overly simplistic picture, Rinaldi said. “That is what would happen at very high energy where we can approximate the quarks and gluons as free objects.”

In the real world, at lower energy, quarks and gluons are confined, or bound together within particles like protons and neutrons, Rinaldi explained. And those quarks and gluons interact strongly with one another in myriad ways.

“We cannot tell exactly what the velocities and positions of all the constituents inside the neutron are. It’s a quantum mechanical bundle of quarks and gluons and the interactions among them,” Rinaldi said. The strength of the W boson interaction that triggers the neutron decay depends on a value determined by the composite sum of all those internal interactions.

“What the W boson sees is the nucleon axial coupling constant, a number that parameterizes all the interactions that the W boson could have with the constituents inside the neutron,” Rinaldi said. 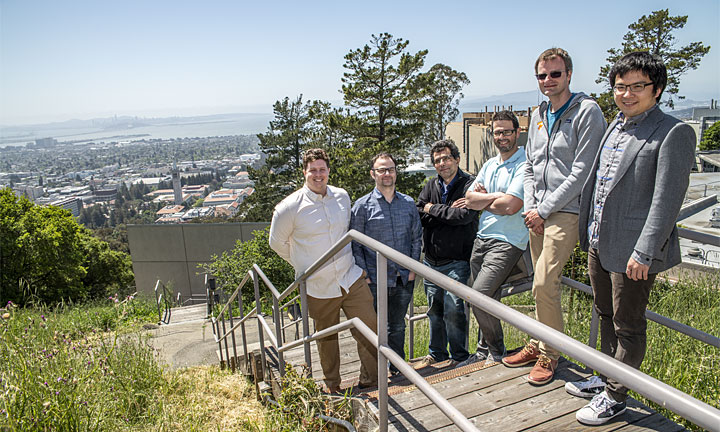 To calculate the axial coupling constant, or gA, physicists use powerful supercomputers to solve the equations of quantum chromodynamics (QCD)—the theory of the strong nuclear force, which governs how quarks and gluons interact. These complex equations can be viewed as containing more than a million variables that account for all the possible interactions within the teeming microcosm of a neutron. They would be impossible to solve without a technique known as lattice QCD. Lattice QCD places the particles at discrete points on an imaginary four-dimensional grid of spacetime (three spatial dimensions plus time) to calculate all the possible interactions of adjacent particles one by one, and then combines them into a final result. 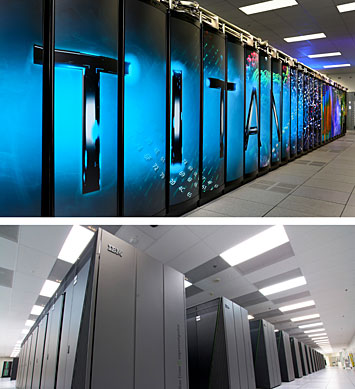 The overall computational part is fairly straightforward, Rinaldi said, again emphasizing that this is a vastly simplified view: “You have a computer and a code that solves the equations. You run the code on the computer, do analysis, and extract the result. It is kind of like doing an experiment because there are many steps and parts—analogous to a particle accelerator, its detectors, the collisions, and the data collection—and we have to control every one of these steps.”

One of Rinaldi’s roles was to create inputs for the “experiment”—a series of simulations that each included a different mass for the neutron. Artificially inflating the mass of the neutron makes the equations easier to work with, he explained.

“The algorithms become harder and harder to use, requiring more computing time to solve, as you try to analyze what happens in the real world. We would have huge error bars. But if you artificially change the input to the equations—make the neutrons more massive—that makes it easier to calculate. We can get a very accurate result for each of these calculations at higher masses, and then put the results together to extrapolate to the real-world conditions,” he said.

Reducing the noise to extract the signal

But changing the input can only do so much. The Berkeley Lab-led team’s biggest leap in precision (relative to other groups who have used similar methods to calculate gA) came from improvements to the experiment’s “detector,” Rinaldi said.

The team was interested in the properties of the neutron, he explained. But the quantum mechanical interactions of quarks and gluons can also generate “excited states” that look like neutrons but are not neutrons. Those excited states generate “noise” that contaminates the signal. The Berkeley Lab team figured out how to filter out the noise to produce a result that, for the first time, achieved the one-percent threshold of precision that is a gold-standard for lattice QCD calculations.

“When measuring the axial coupling, the signal-to-noise degrades exponentially the longer the neutron travels,” said Chia Cheng “Jason” Chang, a postdoc at Berkeley Lab who led the analysis. “Past calculations were all performed amidst this more noisy environment.”

“We found a way to extract the measurement before the noise takes over and ruins the experiment,” Rinaldi said.

The scientists have already used the new nucleon axial coupling calculation to derive a purely theoretical prediction of the lifetime of the neutron. Right now, this new value is consistent with the results from both types of experimental measurement, which differ by a mere 9 seconds.

“We have a number for the neutron lifetime: 14 minutes and 40 seconds with an error bar of 14 seconds. That is right in the middle of the values measured by the two types of experiments, with an error bar that is big and overlaps both,” Rinaldi said.

With more statistics from more powerful supercomputers, the research team hopes to drive the uncertainty margin down to about 0.3 percent. “That’s where we can actually begin to discriminate between the results from the two different experimental methods of measuring the neutron lifetime,” Chang said. “That’s always the most exciting part: When the theory has something to say about the experiment.”

Ultimately, Rinaldi said, this and other calculations enabled by the team’s computational technique could improve our understanding of protons and neutrons, and help answer other outstanding questions about nuclear physics, dark matter, and the nature of the universe.

This research was supported by the DOE Office of Science, the RIKEN laboratory in Japan, and the U.S. National Science Foundation.