Using Hydrogen Ions to Manipulate Magnetism on the Molecular Scale 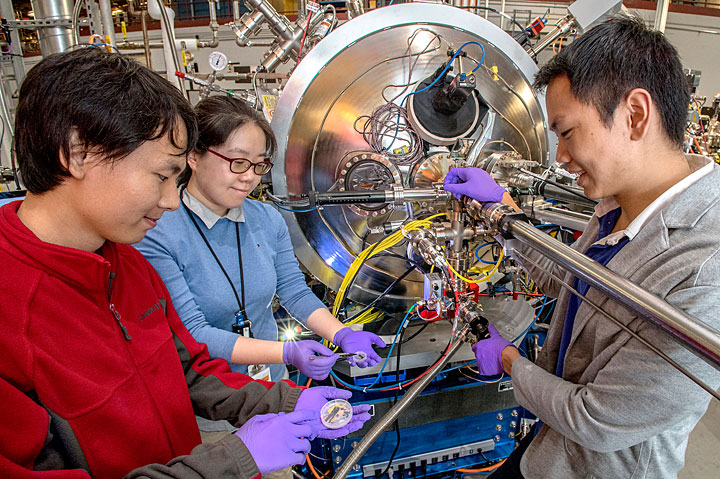 A team of researchers from the Massachusetts Institute of Technology (MIT) and the U.S. Department of Energy’s (DOE) Brookhaven National Laboratory has determined how to use hydrogen ions, “pumped” from water in the air at room temperature, to electrically control magnetism within a very thin sample of a magnetic material. This approach for manipulating magnetic properties could speed up advances in computing, sensors, and other technologies.

The research, described in the November 12, 2018, online edition of Nature Materials, was performed in part at Brookhaven’s National Synchrotron Light Source II (NSLS-II), a DOE Office of Science User Facility. The measurements, taken at NSLS-II’s Coherent Soft X-ray Scattering (CSX) beamline, were critical in revealing the microscopic mechanism involved, in particular the hydrogen ions’ presence within the sample and their role in the changes of the sample’s magnetic structure.

This graphic of the layered sample shows water molecules in the air being used as a source of hydrogen ions. When a positive voltage (not shown) is applied across the sample, the ions move to the bottom layer and cause a switch in the direction of the magnetic fields (red arrows). The oxygen atoms eventually return to the air.

Among the several possible applications of this research is its potential to become a new platform for the developing field of spintronics, devices that are based not just upon electronic charge but also electronic spin, the built-in property of an electron that makes it act as a tiny magnet.

Unlike standard electronics, which rely on complementary metal-oxide semiconductor (CMOS) technology (used to make each of the billions of transistors in a microchip), spintronic devices are built upon magnetic materials, which contain magnetic atoms such as iron or manganese. Spintronics devices can retain their magnetic properties without a constant supply of power, unlike standard microchips, and, because they generate significantly less heat, are more energy efficient.

“As CMOS technologies approach the end of their roadmap, spin-based devices are being widely pursued for the beyond-CMOS era,” said the study’s lead researcher, MIT’s Geoffrey Beach, a professor of materials science and engineering and co-director of the MIT Materials Research Laboratory. “One of the requirements for bringing spintronics into the mainstream is an effective way to electrically control magnetism. Essentially, we are trying to make a magnetic analog of a transistor.” 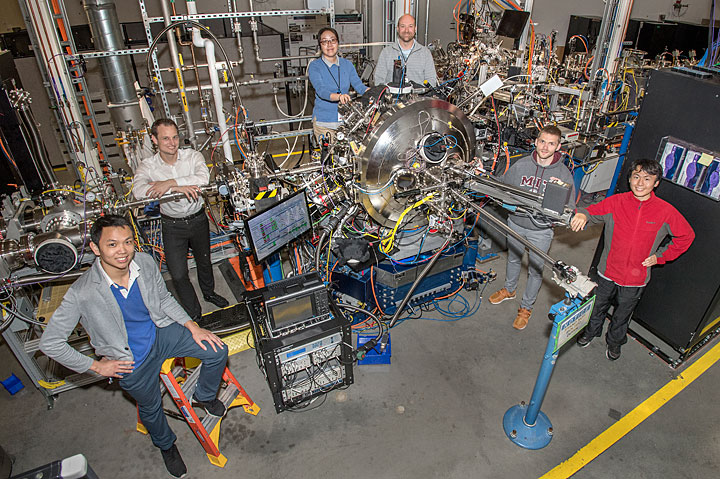 Members of the research team at the CSX beamline, where they confirmed the presence of hydrogen ions in their sample. From left to right: Aik Jun Tan, Felix Büttner, Wen Hu, Claudio Mazzoli, Ivan Lemesh, and Mantao Huang.

One approach to achieving this control is by inserting ions into the structure that can move between the layers and modulate its electromagnetic behavior. This is called magneto-ionic switching. Researchers have already yielded some promising results, but the types of ions used in previous investigations caused more problems than they solved. In this study, the team was able to remedy some of these issues using hydrogen ions (H+), which are relatively innocuous and also the smallest possible ions, making them ideal for inducing rapid electric-field-driven changes in solid-state structures.

The researchers demonstrated the use of hydrogen ions for reversible magneto-ionic switching in a layered structure consisting of a platinum base, cobalt, palladium, gadolinium oxide, and a gold contact to top it off. Palladium (Pd) is well known for its ability to store hydrogen within the “nooks” of its atomic lattice. Placing a voltage across the sample, and alternating between a positive and negative voltage, can pump hydrogen in and out of the Pd layer, switching the magnetism back and forth from out-of-plane to in-plane. This is the first time that scientists have demonstrated reversible “hydriding” of a heavy metal.

To verify that the hydrogen was inserted into the Pd layer, the group performed x-ray absorption spectroscopy (XAS) at the CSX beamline. CSX offers researchers state-of-the-art soft x-ray scattering and imaging tools, and was designed for studying the electronic texture and behaviors of composite materials. With XAS, researchers can determine the local electronic structure around specific elements in their sample – even detecting very small changes – due to the tunable nature of the x-rays.

“We performed XAS measurements with a very small x-ray beam (approximately 100 microns) to aim at the active part of the engineered structure. We observed a clear shift in the Pd spectrum when changing the voltage applied to the sample, which was a sign of the transformation of Pd to PdH,” said Claudio Mazzoli, lead beamline scientist at the CSX beamline. “These measurements provided direct evidence of the microscopic mechanism happening deep within the sample. Thus, we now know that the insertion of hydrogen into the device is the explanation for the changes in the sample’s magnetic properties as detected by lab measurements.”

“This is a very novel and unique method, and it opens up an entirely new way of modulating magnetic fields in solid state devices, potentially impacting spintronic applications,” said Hu.

This study was primarily supported by the National Science Foundation (NSF) through the Massachusetts Institute of Technology Materials Research Science and Engineering Center (MRSEC). Operations at NSLS-II are supported by DOE’s Office of Science.