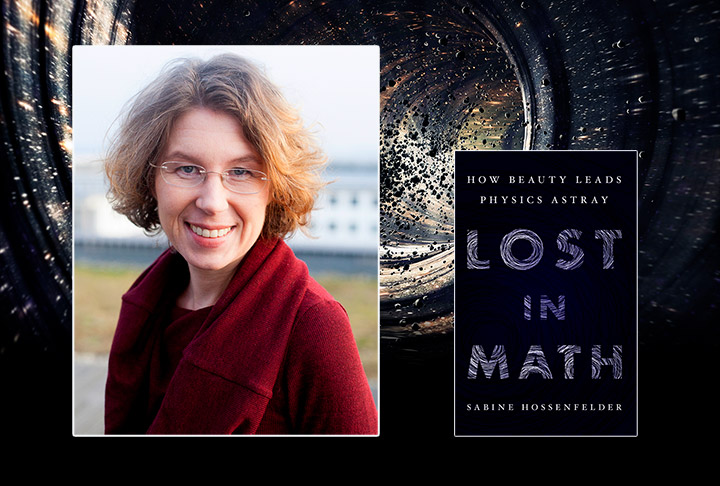 UPTON, NEW YORK — Sabine Hossenfelder, a physicist and author of "Lost in Math: How Beauty Leads Physics Astray," will speak at the U.S. Department of Energy's Brookhaven National Laboratory on Tuesday, April 9. Hossenfelder's talk, titled after her book, will be held at 5 p.m. in the large seminar room of Physics (Bldg. 510) and is sponsored by Brookhaven Women in Science.

Theoretical physicists often rely on beauty—simplicity and naturalness, in particular—as they develop new laws that describe nature. These guides have been strongly influential in the foundations of physics since the development of the standard model of particle physics, which describes all known fundamental particles and explains how they interact. During her talk, Hossenfelder will describe how arguments of beauty have led to a dead end as well as what can be done about it.

This lecture is scheduled to be webcast live on WBNL.

Hossenfelder will also give two technical talks while at the Laboratory: "Dark Matter—or What?' at 11 a.m. in Physics' small seminar room and "Do Women Get Fewer Citations Than Men?" at 3:30 p.m. in the large seminar room. These talks are sponsored by the Lab's Physics Department and its Nuclear & Particle Physics Directorate's Inclusion & Diversity Council, respectively.

These lectures are free and open to the public. All visitors to the Laboratory 16 and older must bring a photo ID.

Sabine Hossenfelder is a physicist, science writer, and research fellow at Frankfurt Institute for Advanced Studies in Germany. Her book, "Lost in Math: How Beauty Leads Physics Astray," published in June 2018. She has more than 60 published research articles—most of them single-authored—in areas including general relativity, quantum gravity, particle physics, quantum foundations, and statistical mechanics. Her writing has been featured in Scientific American, New Scientist, Quanta Magazine, and other publications.

Brookhaven Women in Science is a diverse and inclusive community that promotes equal opportunity and advancement for all women in support of world-class science.

The Nuclear & Particle Physics Directorate's Inclusion & Diversity Council at Brookhaven Lab promotes a respectful, supportive workplace where all are welcomed and integrated to reach their full potential.