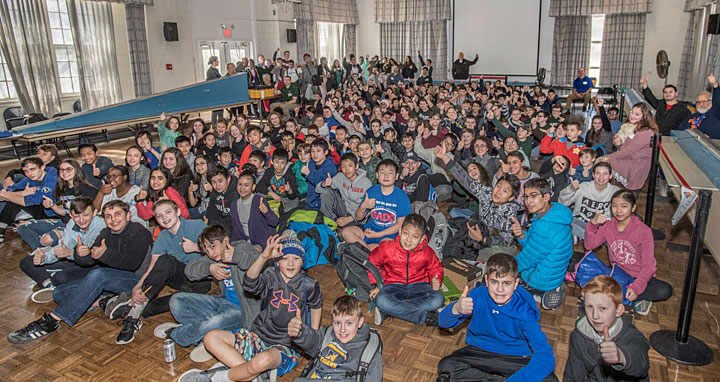 Students from Robert Moses Middle School (North Babylon) swept the electrified track category— taking first, second, and third place—and earned four other trophies at the 29th Middle School Maglev Contest held at the U.S. Department of Energy’s Brookhaven National Laboratory on Mar. 20. In addition to the sweep, the team placed first and third in the appearance-futuristic category, second in wind power, and third in the scale-model categories at this annual competition that challenges students to use engineering skills and principles to design model vehicles that travel down a magnetic track.

John Carter of the U.S. Department of Energy’s (DOE) Brookhaven Site Office welcomed the students to the Lab and encouraged them to consider careers in science, technology, engineering or math. “We’re hoping that this contest may be the foundation of a future career that brings you back to Brookhaven Lab as an intern,” said Carter.

Perhaps the most excited student was Florian Victor from E.W. Miles Middle School. “This is the first time our school has entered the contest and I’m taking home a first-place trophy in the appearance-scale model,” he said.  Victor, who nicknamed his Maglev vehicle “flatmobile,” said he adjusted his vehicle 17 times before he placed it on the competition track. “All the work was worth it because now I get to take it home and put it on my bookcase front and center where I can look at it all the time and remember how much fun it was to build. This was an awesome day for me and my school!”

Technology teacher Tom Andrews from Robert Moses Middle School said his students worked very hard on their maglev vehicles. “They really got interested in troubleshooting and determining how the vehicles would work best,” said Andrews.  “And, they learned something new every time we tested the vehicles. We’re very proud of all our students. This contest is a perfect and fun way to prepare our students for careers in engineering. We plan to come back to compete again next year!” 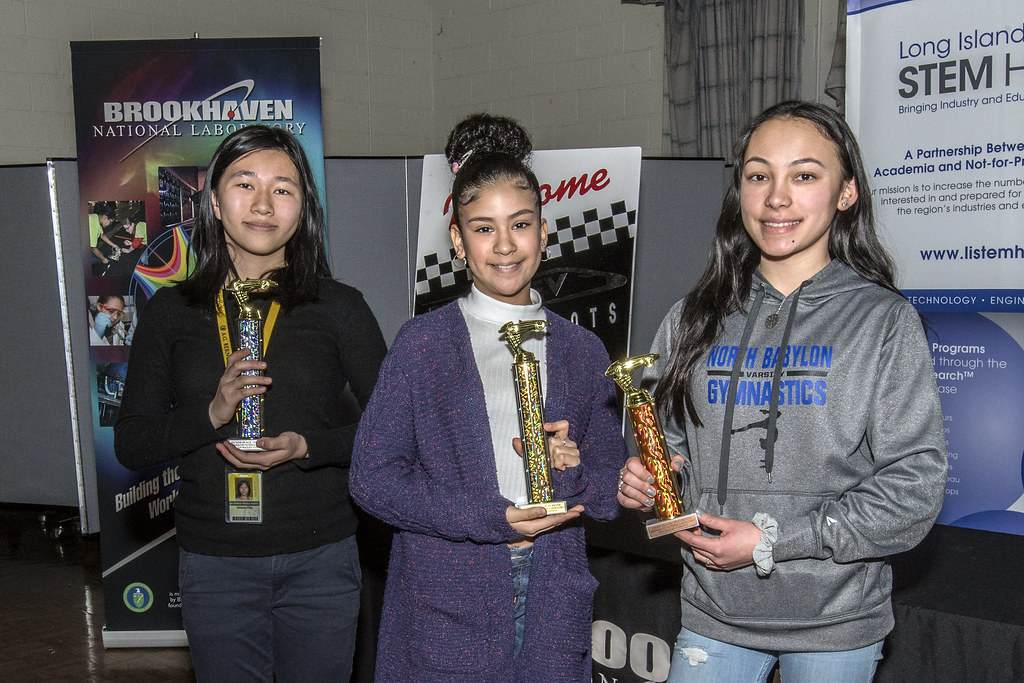 The contest is based on research by two Brookhaven engineers, the late Gordon Danby and James Powell, who invented and patented maglev technology—the suspension, guidance, and propulsion of vehicles by magnetic forces. Magnetic properties give the maglev trains their extraordinary capabilities for speed and stability. These same principles—using magnetic forces to move matter — are used in world-class research facilities at Brookhaven Lab, including the Relativistic Heavy Ion Collider (RHIC) and the National Synchrotron Light Source II (NSLS-II) — which are both DOE Office of Science user facilities. Magnetic properties allow the machines to move particles at nearly the speed of light for research purposes.

Words like gravity, slow, fast, and balance could be heard around the room as students tested and ran their vehicles at the various maglev track stations hoping their time would earn them a top spot in the competition.

Nearly 200 students from 11 Long Island middle schools entered the contest, in which they were required to design and construct model maglev vehicles according to engineering specifications in a choice of seven categories: electrified track, futuristic, wind power, gravity, self-propelled/balloon, self-propelled/other, and scale-model design. Judging was based on speed, efficiency, appearance, and the students' written design process.