UPTON, NY—The American Physical Society (APS) has elected two scientists from the U.S. Department of Energy’s (DOE) Brookhaven National Laboratory as 2019 APS fellows. With more than 55,000 members from academia, government, and industry, APS seeks to advance and share physics knowledge through research journals, scientific meetings, and activities in education, outreach, and advocacy. Each year, a very small percentage of APS members are elevated to the status of fellow through a peer nomination process. Fellows are recognized for their exceptional contributions to physics, including in research, applications, leadership and service, and education.

Brookhaven Lab physicist Michael Begel has been recognized “For international leadership in contributions toward a better understanding of jets and related physics in the ATLAS and DZero experiments, leading to advances in the trigger and data acquisition in the ATLAS upgrades.”

Both ATLAS, located at the Large Hadron Collider (LHC) at Europe’s CERN laboratory, and DZero, an older experiment that ran at Fermi National Accelerator Laboratory’s Tevatron collider, analyze sprays of particles emitted when particle beams circulating in opposite directions collide head on. To obey the laws of physics, some of these emitted particles end up producing narrow jets of other particles. By analyzing the jets, scientists can determine what initial particle triggered the jet and learn about the conditions created in the collision.

“I’m deeply honored to have been named a Fellow of the APS,” said Begel. “It is a highlight of my career to be recognized as a Fellow by my peers.”

Begel began developing his particle analysis expertise while studying the production of direct photons (particles of light) at another Tevatron experiment known as E706. For that analysis, he earned his Ph.D. from the University of Rochester in 2000. He then gained extensive experience in collider physics working on the DZero experiment. There he became an accomplished researcher in the study of quantum chromodynamics (QCD)—the theory that describes the strong-force interactions of particles called quarks—as well as the production of “top” quarks.

In late 2007, as physicists were anticipating the startup of the LHC, the world’s largest particle collider, Begel joined Brookhaven Lab as an assistant physicist to work on the ATLAS experiment. Brookhaven coordinates and leads U.S. contributions to ATLAS.

From the beginning, Begel had a profound impact on jet performance and physics in ATLAS, developing the “triggers” that decide which of billions of collision events to record for later analysis as physicists search for interesting signs of new physics. He led several jet measurement and analysis groups both before and after being granted tenure at Brookhaven Lab in 2014. His work has fed the evolution of trigger and data-acquisition systems that are central components of ATLAS upgrades currently being installed to maximize the scientific output of higher collision rates anticipated at the LHC.

Begel continues to be a key figure in Brookhaven Lab’s intellectual and technical leadership in high energy physics (HEP), serving as group leader for research on ATLAS at Brookhaven since 2016. He is principal investigator for the HEP Energy Frontier Research, and for HEP detector R&D. Two of the trigger/data-acquisition technologies he’s helped to develop have been submitted for patents. 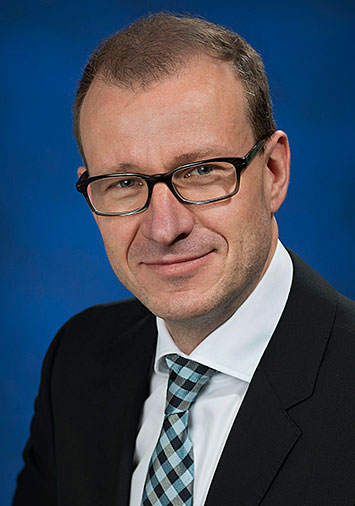 Robert Konik, chair of the Condensed Matter Physics & Materials Science Division (CMPMS) at Brookhaven Lab, is being honored “For applications of exactly solvable techniques to strongly correlated low dimensional systems in and out of equilibrium.”

Strongly correlated materials are compounds in which unusual (often technologically useful) electronic or magnetic properties emerge from interactions or collective behavior of electrons, spin alignments, or charge separations. They include superconductors—materials that act as insulators at room temperature but can carry electrical current with no resistance when cooled to the right temperature—as well as materials that convert small amounts of heat into electric current. Understanding and learning how to harness these dramatic properties could help meet the energy challenges of our nation.

These new features present a challenge. While of great interest in terms of fundamental physics and possible applications, the properties that emerge from strong correlations are generically difficult to describe theoretically. Konik’s career has been devoted to tackling this problem. He has used both existing sophisticated non-perturbative tools that are able to describe strongly correlated physics and has also developed new ones. He is one of a very few researchers devoted to applying exactly solvable models and field theoretic approaches to the study of one- and two-dimensional condensed matter systems. He has developed code packages to advance the field and made them available for all who want to advance the field.

“I am very happy and honored to have my contributions to the field recognized by being named an APS fellow,” said Konik. “It will inspire me to continue to work in applying non-perturbative approaches to better understand strongly correlated and topological condensed matter systems.”

Konik earned his Ph.D. in low dimensional quantum field theory in 1998 from Cornell University. A Canada-U.S. dual national, he worked as a postdoctoral fellow funded by the Natural Sciences and Engineering Research Council of Canada in the department of physics at the Institute for Theoretical Physics, University of California, Santa Barbara from 1997 through 1999. He then joined the University of Virginia as a Research Associate, advancing to Research Scientist in 2001.

Konik joined Brookhaven Lab as a Research Scientist in 2003, with promotions to Assistant Physicist (2004), Associate Physicist (2006), and Physicist (2009). He served as Deputy Chair of CMPMS (2015) and was named Chair in January 2016. He has also been an adjunct professor at Boston College, an associate editor at the journal Physical Review B (since 2008), is an Honorary Research Associate at the London Centre for Nanotechnology (2015-2019) and has held visiting appointments at Universiteit van Amsterdam in the Netherlands and Université de Cergy-Pontoise, Paris, France.