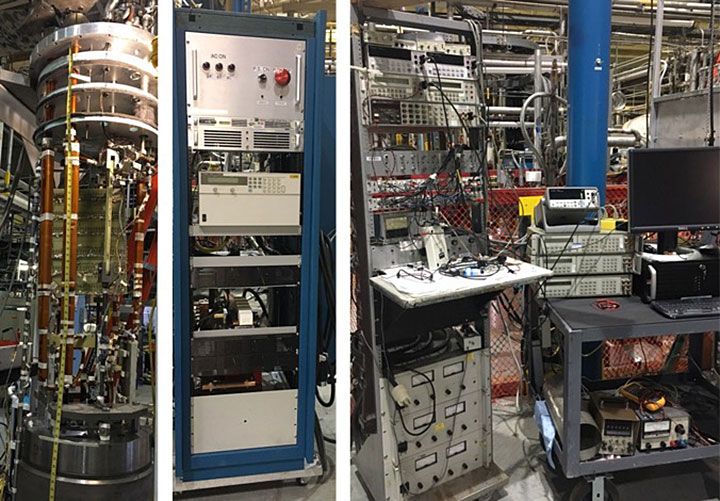 Brookhaven Lab's Superconducting Magnet Division has a unique superconducting magnet (left) and research and development facility (right) for testing high-temperature superconducting cables and coils in a background magnetic field of up to 10 Tesla. The facility is equipped with hardware to detect and protect against quenches, where materials suddenly lose their ability to "super" conduct electricity without any resistance and revert to their normal resistive state.

UPTON, NY—A project between the U.S. Department of Energy’s (DOE) Brookhaven National Laboratory and the Massachusetts Institute of Technology (MIT) spinoff Commonwealth Fusion Systems (CFS) has been selected as one of the first 12 to be funded by the DOE’s Innovation Network for Fusion Energy (INFUSE) program. Sponsored by the Office of Fusion Energy Sciences (FES) within DOE’s Office of Science, INFUSE is focused on accelerating fusion energy development through private-public research partnerships. The program provides companies with access to the world-leading facilities and expertise of scientists at DOE’s national laboratories.

“We believe the private sector has important contributions to make in the quest for fusion energy,” said James Van Dam, DOE Associate Director of Science for Fusion Energy Sciences. “This program is an excellent way to leverage the assets of both the private and public sectors in the effort to advance fusion energy science and technology.”

“Brookhaven is incredibly excited to be working with CFS to develop breakthrough technologies for the fusion power industry,” said SMD Head Kathleen Amm. “Compact fusion using high-temperature superconductors (HTS) has the potential to revolutionize power generation. Not only would fusion reactors provide limitless energy, but also the development of commercially viable HTS in this industry would enable lossless power transmission and high power density, and reduced emissions for transportation. The collaboration between Brookhaven and CFS under the INFUSE program to characterize the HTS cables is a critical step in developing the technology needed to enable compact fusion.”

Protecting HTS power cables from quenching is a pressing technical challenge in developing fusion energy systems. Quenching is a phenomenon that occurs when a superconductor suddenly stops being able to conduct electricity without any resistance, or energy loss. This unexpected transition from the superconducting to normal resistive state results in the conversion of energy into excessive heat, which can degrade or permanently damage the materials. Quench detection and remediation technologies are crucial for protecting the cables. 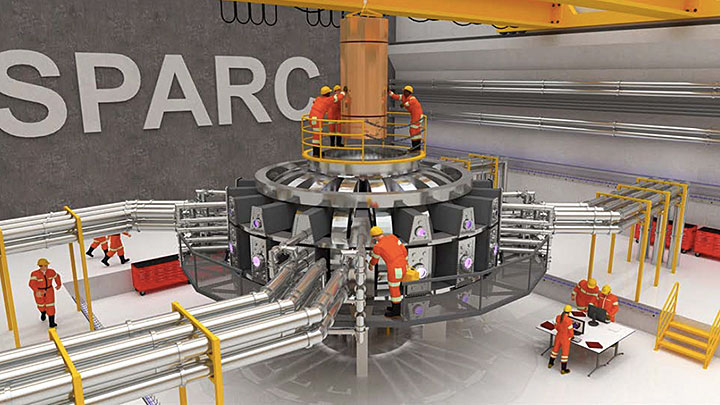 A conceptual rendering of the SPARC tokamak. This compact reactor seeks to be the first controlled device to generate a fusion plasma that produces more energy than it consumes. Credit: Kenneth Filar, MIT Plasma Science and Fusion Center.

At CFS, researchers are using new HTS cables capable of creating high-strength magnetic fields at cryogenic temperatures to realize a tokamak-based power reactor called SPARC. Tokamaks produce thermonuclear fusion power by using a powerful magnetic field to confine a hot plasma (very hot gas containing a collection of ions and electrons) within the reactor. They harness fusion energy using the same process that powers the sun and stars. Fusion occurs in a plasma when two atoms (nuclei) join together to form a new atom, generating an enormous amount of energy. If successful, SPARC—built in collaboration with the MIT Plasma Science and Fusion Center—would be the first controlled device to achieve a net energy gain from fusion and would validate the potential of high-field devices built with new superconducting technology.

The dipole magnet in Brookhaven's SMD has a large open space (left) into which a fixture for testing superconducting cables and coils can be inserted (right). The fixture for this project will provide support to the cable and, with heaters, will be able to change the temperature over a targeted length of the cable.

For the project, CFS will use facilities in Brookhaven’s SMD to perform quench tests on their cables. The Brookhaven-CFS team will collaborate on cable design and construction, cable instrumentation, design and construction of a cable test fixture, quench testing at 4 Kelvin (−452 degrees Fahrenheit) temperature, and quench data analysis. They will install the cables inside a dipole magnet made of the elements niobium and tin (Nb3Sn) and capable of reaching a magnetic field strength of 10 Tesla, approaching the field where SPARC will operate. The team will evaluate the speed and sensitivity of quench detection and protection systems, and determine if quenching causes any degradation in the cables.

Computer models of the CFS HTS cable in the background field magnet in Brookhaven's SMD.

“Brookhaven has a long history with HTS cable and coil research and development,” said Gupta. “The SMD’s unique large-opening magnet is ideally suited to perform studies in high background fields.”

“We are excited for this important program through DOE-FES that will allow us to leverage important expertise at national labs such as Brookhaven,” said Sorbom. “We look forward to working with the team at Brookhaven to advance a new generation approach to quench detection that will support our work to get clean, limitless fusion energy on the grid.”

The INFUSE program solicited proposals from the U.S. fusion industry, and selected projects received awards between $50,000 and $200,000 each, with a 20 percent cost share by industry partners. The awards are subject to a successful negotiation of a Cooperative Research and Development Agreement (CRADA) between the companies and the partnering laboratories. Funding is not provided directly to the private companies but instead provides support to the partnering DOE laboratories to enable them to collaborate with their industrial partners. For the first INFUSE awards, 12 projects representative of six private companies partnering with six national laboratories were selected. A full list of projects with abstracts are available on the INFUSE website.