The following news release was issued by the RHICf collaboration. The RHICf experiment is installed in the "forward" direction (along the beamline) in the same particle interaction region as the STAR detector at the Relativistic Heavy Ion Collider (RHIC), a DOE Office of Science user facility for nuclear physics research at Brookhaven National Laboratory. The RHICf experiment collected data from RHIC's polarized proton collisions to explore further details of asymmetries observed in collisions at RHIC—particularly a preference for certain particles to emerge from these spin-polarized collisions in a particular direction. This new result adds to the puzzling story of what causes this “transverse spin asymmetry”—an open question for physicists since the 1970s. These and other results from RHIC’s polarized proton collisions will eventually contribute to solving this question. For more information about research at RHIC, contact Karen McNulty Walsh, (631) 344-8350, kmcnulty@bnl.gov.

The RHICf experiment is installed in the "forward" direction (along the beamline) in the same particle interaction region as the STAR detector at the Relativistic Heavy Ion Collider (RHIC), a DOE Office of Science user facility for nuclear physics research at Brookhaven National Laboratory.

A group of researchers including scientists from the RIKEN Nishina Center for Accelerator-Based Science, University of Tokyo, Nagoya University, and the Japan Atomic Energy Agency (JAEA) used the spin-polarized Relativistic Heavy Ion Collider (RHIC)—a DOE Office of Science user facility for nuclear physics research at Brookhaven National Laboratory in the United States—to show that, in polarized proton-proton collisions, neutral pions emitted in the very forward area of collisions—where direct interactions involving quarks and gluons are not applicable—still have a large degree of left-right asymmetry. This finding suggests that the previous consensus regarding the generation of particles in such collisions needs to be reevaluated.

Understanding the mechanism through which particles are created in collisions involving protons has relevance for understanding cosmic ray showers, where particles entering Earth’s atmosphere from outer space create particle “showers” that help us learn about astronomical phenomena that take place in the extreme environment of the universe. However, it is very difficult to study the details of how particles are created, as the force that binds protons in the nucleus and that bind quarks and gluons into protons—the strong interaction or nuclear force—is very strong compared to other forces such as the electromagnetic force and gravity. One avenue for exploring these challenging questions has involved an attribute of protons called “spin,” which can be understood by analogy to the way a toy top rotates on its axis. The spin of protons can be artificially aligned in a process that is called "polarization." 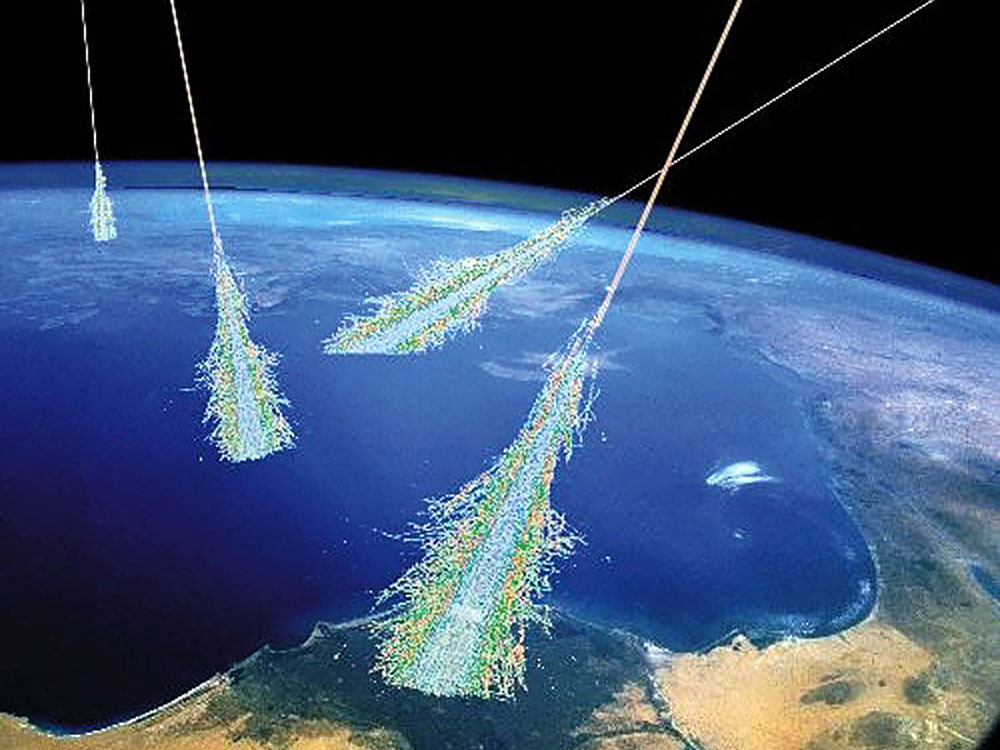 Understanding the mechanism through which particles are created in collisions involving protons like those at RHIC has relevance for understanding cosmic ray showers created by particles entering Earth's atmosphere. (Image credit: Simon Swordy (U. Chicago), NASA)

However, with additional experiments at RHIC, findings began to emerge that challenged the consensus. According to Yuji Goto, one of the authors of the current work, “At the energy of RHIC, quarks and gluons are scattered, and various particles are generated in the form of a jet. When the left-right asymmetry of the jet generated forward of the collision position at RHIC was examined, it was found that, contrary to expectations, the overall jet and the pions contained in the jet did not show a left-right asymmetry. This suggested that the cause of the left-right asymmetry was not the direct scattering of quarks and gluons.”

In order to further investigate, the researchers conducted experiments, published in Physical Review Letters, where they used an electromagnetic calorimeter detector previously used in the Large Hadron Collider at CERN—known as the LHCf experiment there and the RHICf experiment at RHIC—to take a detailed look at the gamma rays generated by pion decays at the very forward region of the collision. They found, however, that the left-right asymmetry in neutral pions persists even in that very narrow area.

According to Goto, “We found that the asymmetry continues to exist at a very narrow angle from right in front of the collision, and in fact increases as the angle moves away from zero. This result necessitates a reexamination of previous theoretical interpretations. The small forward angle of the asymmetry corresponds to the energy region in which the protons cause the excited state, and the contribution of other mechanisms—diffraction and resonance—may provide a hint to the mystery.”

According to Minho Kim, an International Program Associate at RIKEN and graduate student at Korea University, who was the first author of the experiment, “It was great to be able to work with the new detector, and we plan to continue our work to understand the mechanism that generates the left-right asymmetry. This is sure to give us insights into cosmic ray showers and thus help us to understand phenomena that take place in the extreme environment of the universe.” 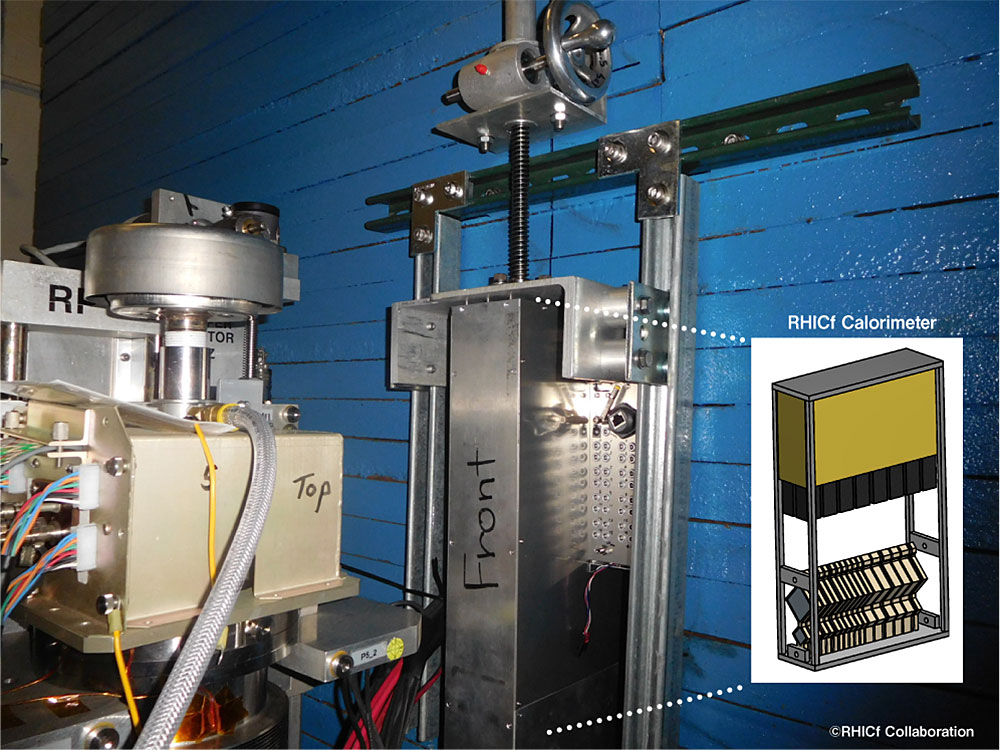 The RHICf detector installed in the beamline at the Relativistic Heavy Ion Collider.

More information on the RHICf experiment is available at http://crportal.isee.nagoya-u.ac.jp/RHICf/.

RIKEN is Japan's largest research institute for basic and applied research. Over 2500 papers by RIKEN researchers are published every year in leading scientific and technology journals covering a broad spectrum of disciplines including physics, chemistry, biology, engineering, and medical science. RIKEN's research environment and strong emphasis on interdisciplinary collaboration and globalization has earned a worldwide reputation for scientific excellence.

About the RIKEN Nishina Center for Accelerator-Based Research (RNC)