Scientists at Ames Laboratory, Brookhaven National Laboratory, and the University of Alabama Birmingham have discovered a light-induced switching mechanism in a Dirac semimetal. The mechanism establishes a new way to control the topological material, driven by back-and-forth motion of atoms and electrons, which will enable topological transistor and quantum computation using light waves.

Just like today’s transistors and photodiodes replaced vacuum tubes over half a century ago, scientists are searching for a similar leap forward in design principles and novel materials in order to achieve quantum computing capabilities. Current computation capacity faces tremendous challenges in terms of complexity, power consumption, and speed; to exceed the physical limits reached as electronics and chips become hotter and faster, bigger advances are needed. Particularly at small scales, such issues have become major obstacles to improving performance. 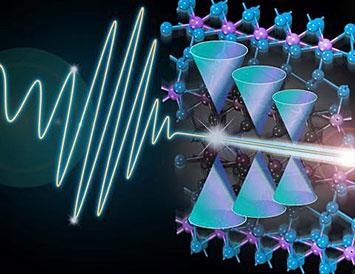 Scientists who study topological materials face a challenge—how to establish and maintain control of these unique quantum behaviors in a way that makes applications like quantum computing possible. In this experiment, Jigang Wang and his colleagues demonstrated that control by using light to steer quantum states in a Dirac semimetal.

“Light wave topological engineering seeks to overcome all of these challenges by driving quantum periodic motion to guide electrons and atoms via new degrees of freedom, i.e., topology, and induce transitions without heating at unprecedented terahertz frequencies, defined as one trillion cycles per second, clock rates,” said Jigang Wang, a senior scientist at Ames Laboratory and professor of physics at Iowa State University. “This new coherent control principle is in stark contrast to any equilibrium tuning methods used so far, such as electric, magnetic and strain fields, which have much slower speeds and higher energy losses.”

Wide-scale adoption of new computational principles, such as quantum computing, requires building devices in which fragile quantum states are protected from their noisy environments. One approach is through the development of topological quantum computation, in which qubits are based on “symmetry-protected” quasiparticles that are immune to noise.

However, scientists who study these topological materials face a challenge—how to establish and maintain control of these unique quantum behaviors in a way that makes applications like quantum computing possible. In this experiment, Wang and his colleagues demonstrated that control by using light to steer quantum states in a Dirac semimetal, an exotic material that exhibits extreme sensitivity due to its proximity to a broad range of topological phases.

“We achieved this by applying a new light-quantum-control principle known as mode-selective Raman phonon coherent oscillations—driving periodic motions of atoms about the equilibrium position using short light pulses,” says Ilias Perakis, professor of physics and chair at the University of Alabama at Birmingham. “These driven quantum fluctuations induce transitions between electronic states with different gaps and topological orders.”

An analogy of this kind of dynamic switching is the periodically driven Kapitza’s pendulum, which can transition to an inverted yet stable position when high-frequency vibration is applied.  The researcher’s work shows that this classical control principle - driving materials to a new stable condition not found normally - is surprisingly applicable to a broad range of topological phases and quantum phase transitions.

“Our work opens a new arena of light wave topological electronics and phase transitions controlled by quantum coherence,” says Qiang Li, Group leader of the Brookhaven National Laboratory’s Advanced Energy Materials Group. “This will be useful in the development of future quantum computing strategies and electronics with high speed and low energy consumption.”