State-of-the-art facility and partnership among DOE, NYS, Brookhaven Lab, and Jefferson Lab will open a new frontier in nuclear physics, a field essential to our understanding of the visible universe with applications in national security, human health, and more

UPTON, NY—U.S. Department of Energy (DOE) Under Secretary for Science Paul Dabbar, leaders from DOE’s Brookhaven National Laboratory (Brookhaven Lab) and Thomas Jefferson National Accelerator Facility (Jefferson Lab), and elected officials from New York State and Virginia today commemorated the start of the Electron-Ion Collider project. The event was an opportunity for in-person and virtual speakers to voice their support for this one-of-a-kind nuclear physics research facility, which will be built at Brookhaven Lab by a worldwide collaboration of physicists over the next decade.

The 2.4-mile-circumference particle collider will act as a high-precision sub-atomic “microscope” for exploring the innermost three-dimensional structures of protons and larger atomic nuclei. Experiments at the EIC will reveal how those particles’ fundamental building blocks (quarks and gluons) are arranged, how their interactions build up the mass of most of the visible matter in the universe and uncover the secrets of the strongest force in Nature. The journey into this new frontier in nuclear physics will attract the world’s best and brightest scientists, produce scientific and technological advances that extend to medicine and national security, and serve as a hub of innovation, collaboration, and STEM education for decades to come.

“DOE scientists have been at the forefront of so many discoveries in nuclear physics,” said DOE Under Secretary for Science Paul Dabbar. “Thanks to the support of President Trump’s leadership, Congress, our Office of Science, and the State of New York, we’ve come together to create a one-of-a-kind research facility that is strengthened by collaboration with partners at Jefferson Lab and other national labs and institutions around the world. From the most basic components of matter to the farthest reaches of the cosmos to the next technologies that will drive the economy of the United States and the world, the DOE will continue this mission right here at Brookhaven and at our labs across the country.” 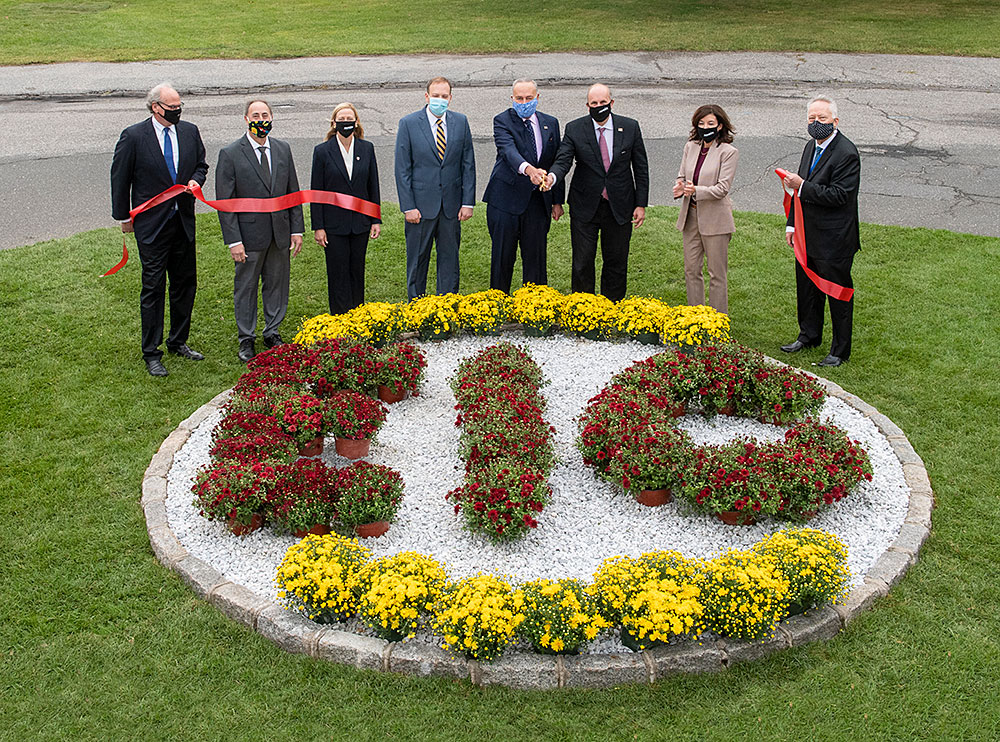 With a proposed budget in the range of ~$1.6-2.6 billion from DOE’s Office of Science and $100 million from New York State, the project will draw on expertise from throughout the DOE complex and at universities and laboratories around the world. Physicists from Brookhaven Lab and Jefferson Lab will play leading roles.

“As affirmed by the National Academy of Sciences, the EIC will maintain leadership in nuclear physics and accelerator science and technology with impacts on our technological, economic, and national security,” said Brookhaven Lab Director Doon Gibbs. “We are delighted to be partners with Thomas Jefferson National Accelerator Facility in designing, constructing, and operating the EIC. We will build upon strengths at both laboratories, but also reach out to other laboratories both in the U.S. and internationally.”

“Jefferson Lab is proud to partner with Brookhaven Lab to bring this next-generation research facility to fruition,” said Jefferson Lab Director Stuart Henderson. “The EIC will enable a new era of scientific discovery that promises to answer some of the most fundamental, yet profound questions that we can ask about matter, such as: How does the mass and spin of protons and neutrons arise from their constituent pieces?  How does the strongest force in the universe—the force that holds quarks together inside protons and neutrons—give rise to the properties of protons, neutrons and all visible matter?  What does a proton or neutron ‘look like’ on the inside? In a sense, the EIC will allow us to complete our century-long adventure of figuring out what atoms are made of and how they work.”

“The Electron-Ion Collider, a one of a kind facility in nuclear research, is becoming a reality, and I can tell you that this news was received with great enthusiasm and excitement by the European nuclear and particle-physics communities,” said CERN Director-General Fabiola Gianotti in a video message.

Elected officials from both New York and Virginia, who provided critical support in moving the EIC project forward, took part in the event at Brookhaven Lab.

“BNL has the talent, the technology, and the track-record to make the most of this national project,” said U.S. Senator Charles Schumer (NY).  “The Lab is used to taking on big projects, critical research, and the most serious questions science can pose.  This multi-billion-dollar federal investment on Long Island will guarantee Brookhaven National Lab continues to be a world-class research facility for the next generation.”

“This cutting-edge project will inject billions of dollars and an extensive number of jobs into our communities all while churning out scores of scientific discoveries that help us understand the world around us, harness the untapped potential of the natural world and, from human health to our national security and beyond, benefit nearly every aspect of our lives," said Congressman Lee Zeldin (NY). "Brookhaven National Lab has pioneered the future of clean and green energy, medical and cancer research, astrophysics, and far more, all while encouraging and cultivating the bright minds of future generations of researchers. Throughout this process, as co-chair of the National Labs Caucus and the Representative in the House for BNL, I've worked closely with Secretary Brouillette, Secretary Perry, Under Secretary Dabbar, and BNL leadership on this effort. It's amazing to see this project become a reality right here on Long Island."

“COVID-19 has shown us how critically important it is to invest in our scientific infrastructure so we’re ready for future crises, and New York is already investing significant resources to make it a hub for scientific innovation and research,” said New York State Governor Andrew M. Cuomo. “The state’s $100 million investment in this project is part and parcel with that commitment, and this project is a win-win both for scientific development and the New York economy.”

“Innovation is in New York's DNA leading the way in scientific advancement and discovery,” said New York State Lieutenant Governor Kathy Hochul. “Long Island is driving a big part of our cutting-edge research, including at the Brookhaven National Laboratory. We’re proud that the federal government chose Long Island to house the world’s first electron ion collider, bringing a billion-dollar plus investment to the region. This will create thousands of new jobs, attract the best and the brightest minds, and spur millions in additional investment growing Brookhaven, Long Island and the entire state. We are committed to continuing to advance and support the scientific research and development on Long Island as we build back better and reimagine New York State for the post-pandemic future."

“Development of the EIC will help the U.S. maintain its global leadership in nuclear physics and answer outstanding questions about matter and the physical world,” said U.S. Senator Mark R. Warner (VA). "I am proud of the significant role that Jefferson Lab will play in the construction and operation of the EIC and look forward to the groundbreaking scientific discoveries that will occur as a result of this project.”

"Brookhaven National Laboratory has put Long Island at the forefront of scientific innovation while helping our region create a Research Corridor and spur economic growth," said Kevin S. Law, President & CEO of the Long Island Association. "The state-of-the-art Electron-Ion Collider will open up new opportunities for us to continue down that path.”

“Two of the things that drew me to Stony Brook University are the impressive research accomplishments, and powerful partnerships like the ones we celebrate here today at the launch of the Electron-Ion Collider project,” said Stony Brook University President Maurie McInnis. “I am especially pleased that Stony Brook, as a partner in Brookhaven Science Associates, has been able to participate and contribute to the advancement of this work over many years. With our long history of leading research in nuclear and high-energy physics, we are proud that several of our faculty contributed to the conceptual design and scientific justification for the EIC, and I know that many are eager to participate in experiments that will be conducted here.”

EIC science and other benefits

The Electron-Ion Collider will be a 3D “microscope” for studying quarks and gluons, which are the building blocks of protons, neutrons, and atomic nuclei—in other words, all visible matter. Gluons are the subatomic particles that bind quarks into the more familiar particles that make up matter in today’s world.

Collisions at the EIC will reveal how quarks and gluons interact to form these larger building blocks via the strong nuclear force. A deeper understanding of the strong force—which is 100 times more powerful than the electromagnetic force that governs today’s electronic technologies—may lead to insights and discoveries that power the technologies of tomorrow.

The EIC will also give physicists the tool they need to fully explore the origin of proton spin. Proton spin, an intrinsic angular momentum somewhat analogous to the spin of a toy top, is used in nuclear magnetic resonance imaging (NMR and MRI), but scientists still don’t know how this property arises from the proton’s inner building blocks.

The technological advances already under development to make the EIC a reality—e.g., innovative accelerator, particle-tracking, and data-management components—could have widespread impact on new approaches to cancer therapy, solving other “big data” challenges, and improving accelerator facilities for testing batteries, catalysts, and other energy-related materials. In addition, the collider-accelerator infrastructure that powers the EIC will be available to researchers who use particle beams to produce and conduct studies on medical isotopes and to study the effects of simulated space radiation with the aim of protecting future astronauts.

All findings stemming from research at the EIC will be available through openly published research to scientists from other labs, academia, and industry seeking to learn from that knowledge and expand the limits of technology. The EIC science community is looking forward to sharing its success and discoveries with the nation and the world.

Brookhaven Lab is managed for the Office of Science by Brookhaven Science Associates, a partnership between Stony Brook University and Battelle, and six core universities: Columbia, Cornell, Harvard, Massachusetts Institute of Technology, Princeton, and Yale.

DOE’s Office of Science is the single largest supporter of basic research in the physical sciences in the United States and is working to address some of the most pressing challenges of our time. For more information, visit https://www.energy.gov/science/